A 17.3in desktop replacement notebook with plenty of features and an affordable price The Vostro 3700 is the 17.3in model in Dell's Vostro 3000 series, and it's the first Dell business notebook to include Intel's Core i5 CPUs. It's a fast desktop replacement notebook that's perfect for office work, yet it's also capable of undertaking CPU intensive tasks such as media encoding and even gaming. We'd prefer 64-bit Windows 7 installed as standard and a backlit keyboard included -- but it has a plethora of features, has a good battery life and considering its large dimensions it's reasonably lightweight.

Dell's Vostro 3700 is a 17.3in business notebook that's aimed at small business users who are looking for a large, affordable desktop replacement. It packs plenty of performance into its sturdy chassis for everyday office and online communications tasks, as well as running more demanding applications such as video editing, video encoding, and even gaming.

The exterior of the Vostro 3700 looks very business-like appearance — even with its bronze colour scheme. It has a boxy design with some subtle curves thrown in, and because of its size, Dell has achieved a minimalist design feel, without cramming ports and slots into very nook and cranny. Aluminium has been used in the notebook construction around the lid and palm rest areas; and despite a few creaks from the screen and chassis, the notebook feels solidly built and its hinges keep the large screen perfectly in place.

There is plenty of real estate at the base of the Vostro 3700 for you to rest your hands when you type, and the keyboard bounces only very slightly when you hit the keys. Being such a big keyboard, we expected a little more up and down movement from it. It has full sized keys and a number pad, and all the keys are in the standard keyboard locations. Only the arrow keys are very small and difficult to use. With so much space available on the base — above and below the keyboard — we would have preferred more room to be allocated to the arrow keys so they are easier to access with ease.

On the right side of the palm rest is a fingerprint reader that can be used in conjunction with Dell's DigitalPersona software. Using the software, you can register the login details of all the Web sites you visit and log in to them by swiping your finger. It's an intuitive program that can be a time saver once you've set it up. However, the fingerprint reader itself isn't the best we've seen; in our tests it sometimes required multiple passes before it would recognise our registered fingerprints.

Above the keyboard you can find a set of dedicated media controls, which seem out of place for a business notebook. They are touch buttons that can be used to manipulate volume as well as to play, pause, stop and skip media files. These are a handy addition if you work with a lot of video files. 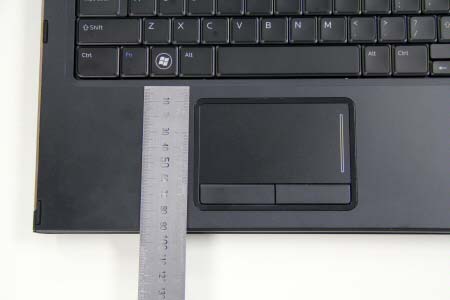 A large palm rest makes for a comfortable typing experience.

Below the keyboard is a large touchpad (9.5x5cm). It's the same texture as the palm rest and even though it occasionally felt a little sticky in our tests, it was adequately responsive overall. It supports three gestures: scrolling, zooming and rotating. The edges of the touchpad are reserved for scrolling and if you disable this feature, then you also disable the gestures. This all or nothing functionality was disappointing to us, as we like to disable the edge scrolling function and just use two-finger gestures to perform the same task. On the flip side, the software allowed us to make the scroll zones at the edges of the touchpad narrower.

Even though it's such a big notebook, the Vostro 3700 doesn't break the 3kg barrier. It weighs in at 2.9kg on its own, which is a healthy weight for a 17.3in model. Carrying it in a backpack won't be a chore as the weight will balance comfortably on your back, but the sheer size of the notebook can make it awkward to transport to the office if commuting, but road warriors will easily transport it.

The inside of the Vostro 3700's base is where all the magic happens. It's the first Dell Vostro to feature Intel's Core i5 CPU and the installed Core i5-520M CPU supplies two cores plus Hyper-Threading for a total of four cores. It has a frequency of 2.4GHz, but Intel’s turbo boost technology allows it to go faster when it detects a high load and the thermal conditions favourable. In our tests where we maximise the CPU load, the turbo boost kicked in to take the frequency up to 2.66GHz, but it can go up to a maximum of 2.933GHz when running some applications. In our Blender 3D rendering test, the Vostro 3700 recorded a time of 55sec, which is exactly the result we were expecting. (It's the same result as the Samsung R580 notebook achieved in our recent tests, and they both notebooks have the same CPU.) 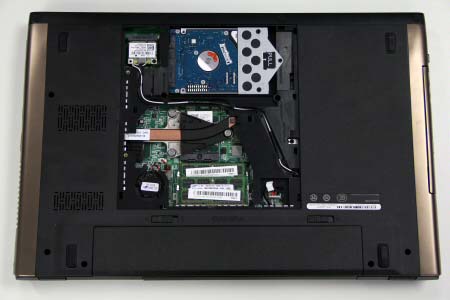 The access panel is easy to remove and it’s easy to upgrade the RAM and hard drive on the Dell Vostro 3700.

When using the Vostro 3700 notebook for everyday tasks, it felt very zippy and we were able to conduct CPU taxing tasks such as file encoding in the background while easily using the notebook for everyday office tasks. Apart from the CPU, another reason for the Vostro’s great performance is the 500GB Seagate Momentus (ST9500420AS) hard drive under the hood. It has a spin speed of 7200rpm, which means file writing and retrieval will be fast. This was revealed in our file copying tests, in which the drive recorded an average transfer rate of 33.65 megabytes per second. This is about 7MBps faster than a notebook with a 500GB, 5400rpm hard drive. Despite the chassis size of the Vostro 3700 notebook, it doesn't have enough space in its base to include two 2.5in hard drives and a RAID configuration; that sort of configuration is reserved for mobile workstations such as Dell's Precision range.

The graphics performance of the Vostro 3700 is also strong, thanks to its NVIDIA GeForce 330M graphics adapter. It recorded a score of 7121 in 3DMark06, which means it's powerful enough to run games. It will run Crysis at a comfortable 55 frames per second when it's played at a resolution of 1024x768 and with low image quality, but it will chug when a higher resolution is used. Racing games such as Need For Speed: Underground 2 are also best played at 1024x768, and can run as high as 120fps with medium image quality.

Dell has installed 4GB of DDR3 RAM in the Vostro 3700, but as the 32-bit version of Windows 7 Professional is installed, only 3GB is useable by the system. Up to 6GB of RAM can be installed via the two SO-DIMM slots located in the base, but you will need to run a 64-bit operating system to maximise the use of these features.

The edges of the Vostro 3700 notes have every feature that a business user should require: USB 2.0 (five ports), VGA, HDMI, eSATA (it doubles as a USB 2.0 port), mini-FireWire, Gigabit Ethernet, microphone and headphone ports, an SD card slot and an ExpressCard/34 slot. The Vostro 3700 also has a DVD burner, a webcam, Bluetooth and 802.11n wireless networking. We would appreciate a full size ExpressCard/54 slot, but that would require some of the other ports to be omitted or clustered closer together, and as it stands, there is plenty of spacing between all the ports and slots, which makes it easier to attach multiple external devices. 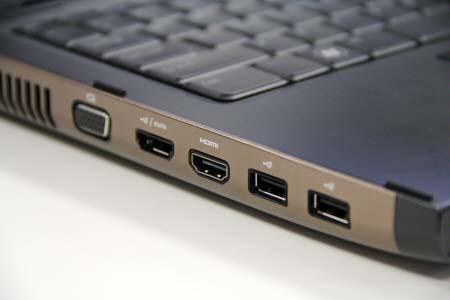 The left side has an air vent for the extraction fan, as well as VGA, eSATA, HDMI and USB 2.0 ports.

The 17.3in screen has a native resolution of 1600x900 and it's well suited to placing two windows side by side when multitasking. However, it's a glossy screen that will reflect any light source in the vicinity. We'd prefer a matte screen on a business notebook as it can be annoying to have to constantly change screen angles to get rid of reflections from overhead lighting. Its brightness and contrast are adequate for viewing photos, but as the contrast is different depending on the angle of the screen — and your viewing position — it's not ideal for photo editing.

Whether you use the Vostro 3700 while on the road, giving a presentation in a location away from a power outlet, or using the notebook to watch a movie outdoors on your balcony, you should get decent performance from its battery life. In these situations the standard 6-cell, 56 Watt-hour (WH) battery will provide you with a very respectable lifespan. It lasted 2hr 8min in our tests — in which we disable the power management features, maximise brightness, enable Wi-Fi and loop an Xvid-encoded video — which is more than enough time for most movies. It will last even longer if you enable a power management plan when using the notebook for everyday tasks.

For $1699, the Vostro 3700 is a great alternative to a desktop PC as it will give you almost the same performance and speed, but in a form factor that you can transport to and from work. It has plenty of built-in connectivity and it's comfortable to use; it performed well in our tests, and we especially love its 7200rpm hard drive. Our one quibble is we’d like the Vostro to be pre-installed with the 64-bit version of Windows (With Dell’s custom build system, you should be able to select this feature during the ordering process). A backlit keyboard would be another welcome addition for times when you have to type for long periods at night.