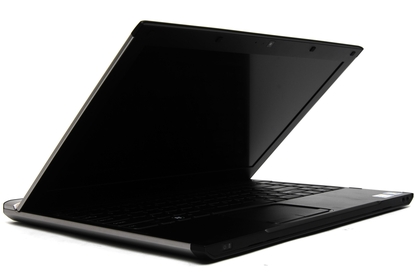 Dell's Vostro V13 is a strong, comfortable and stylish ultraportable for business users. We like its screen, keyboard and touchpad, but we think the sealed battery design is a drawback. Nevertheless, for $1299 and with a one-year, next business day warranty, it's a sweet proposition.

Dell's Vostro V13 is a slimline, 13.3in business notebook with plenty of style and a very sturdy body. It feels great to use and it has a decent amount of power under the hood. Best of all, it only weighs around 1.5kg. It's an almost perfect combination of size, speed and mobility.

In our WorldBench 6 benchmark suite the notebook scored 67. This means that, in terms of overall system performance, the Vostro V13 is over twice as fast as a typical netbook with a 1.66GHz Intel Atom CPU and 1GB of RAM. In our iTunes MP3 encoding and Blender 3D rendering tests, which primarily test CPU speed, the Vostro V13 was approximately three times as fast as netbook. The hard drive's performance was also impressive, recording a speed of 35 megabytes per second in our transfer tests. However, it is a big drive and it will inevitably slow down somewhat once you start to really fill it with files.

You can use the Dell Vostro V13 laptop for just about any office task. What it won't do is display 3D graphics smoothly. Its Intel GMA 4500MHD graphics adapter is fine for viewing videos, but it won't give you much grunt for real-time 3D rendering — it scored only 573 in the 3DMark06 benchmark. You will be able to play games on the laptop only if they are not graphically complex — think board games, stacking games and card games to pass the time with.

The Vostro V13 is one of a number of ultraslim laptops to hit the market in recent times, but its design is a little different to the norm. It actually looks a lot like the Adamo by Dell. The screen is mounted almost 1cm in from the spine of the notebook, so its metal hinges are not located directly on the spine itself. The spine acts as a handle of sorts. The location of the screen gives the notebook more strength and changes its centre of gravity. It feels beautifully balanced; when the notebook is lying flat on a desk, the screen can be lifted using only one hand (it doesn't have a latch). The hinges have just the right amount of resistance to allow precise adjustments.

The screen has a native resolution of 1366x768, plenty of brightness, and adequate viewing angles. The lid is made out of aluminium and does a good job of protecting the screen. You can press down on it or twist it and puddles won't appear on the screen. The chassis is only 1cm thick and feels equally strong (the Vostro V13 is only 1.8cm thick with its lid closed). It's also made out of aluminium, while the palm rest is magnesium. The notebook doesn't creak, nor does it bend when you hold it from either of its corners. Some vents are located on the bottom of the chassis, so if you use the Vostro V13 on your lap it might get a little warm, but overall it won't be too uncomfortable. There is an air vent on the spine of the notebook that you should make sure you don't block. 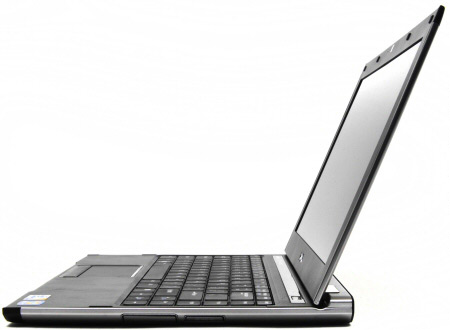 The slim profile makes the Vostro V13 look very elegant, while its light weight makes it easy to cart around without breaking your back. Even its power adapter is only 15mm thick.

There are some drawbacks to the design of the Vostro V13. The USB 2.0 ports are located on the spine of the notebook, rather than the sides, which makes them hard to access. The laptop only has two USB 2.0 ports — it could use at least one more. You also don't get any digital video output ports (you do get a VGA port, however). Perhaps the biggest drawback is that the battery is sealed in the chassis, so you can't just slot in a unit with a longer life. More importantly, you can't carry a spare with you to prolong your productivity away from a power outlet. This probably isn't much of a concern for travellers spending time in airport lounges or on planes, but it would be nice to have the option to give the Vostro V13 more juice. It's a 6-cell battery and it lasted two hours in our video rundown test, which is an average result. 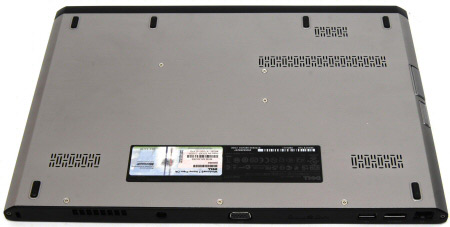 The sealed design of the Vostro V13 means that you can't replace the battery, nor access the memory and storage areas unless you take apart the entire unit.

Because the unit only has two USB 2.0 ports, the included ExpressCard/34 slot will be handy handy for installing a 3G adapter while leaving the ports free for external storage devices. It sits next to an SD card slot. The front of the Dell Vostro V13 has headphone and microphone ports, while the rear includes a Gigabit Ethernet port in addition to the two USB 2.0 ports and VGA port. One of the USB 2.0 ports doubles as an eSATA port, which is very convenient for quickly backing up data to an external hard drive. We love the keyboard on the Vostro V13: it has keys that are 18mm wide and have just the right amount of resistance. The keyboard bounces only slightly when you hit it, so it's not as solid as it could be; that's understandable given the relatively low price point of the laptop. The only thing the keyboard could use to make it better is backlighting. The touchpad is big (81x44mm) and it has soft buttons that don't make a sound when you press them. 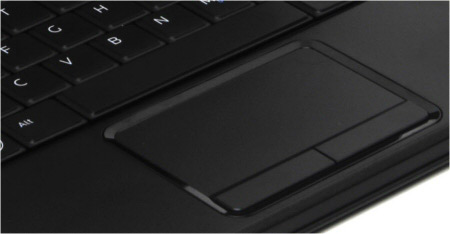 The Vostro V13's keyboard and touchpad are very comfortable to use.

You can purchase the Dell Vostro V13 for $1299, and this includes a one-year, next business day warranty. We think it's a great model to consider if you're after a slim, light and reasonably powerful laptop with a roomy screen and keyboard. However, we hate the fact that the battery is sealed and that there are only two USB 2.0 ports.