There's no doubt the Dell XPS 13 is a beautiful laptop. Its carbon fibre base and Gorilla Glass components not only look good, they give the laptop plenty of strength. Furthermore, the XPS 13 is a fast unit thanks to its Core i7 CPU and 256GB SSD. It lacks ports though and its touchpad needs work, but overall, it's one of the best Ultrabooks on the market.

Dell's XPS 13 (L321X) Ultrabook is a slim, 13in unit that received unanimous praise for its design from all who saw it while I was reviewing it. That does not happen often. Most of time I will hear it from people when they think something is too ugly or too big for their needs; some might even go into detail about missing ports and other features. With the Dell, it seems, looks count more than features and only the IT manager really expressed reservations about the lack of ports on the side.

With a carbon fibre base and Gorilla Glass bonded to its LCD screen, the XPS 13 weighs just under 1.4kg and it's not your run-of-the-mill Ultrabook. A lot of attention to detail has been paid to the way the notebook looks and feels, and Dell has been very successful in this area. It has made a laptop that is very comfortable to hold and use, not to mention a laptop that is extremely sturdy. Its carbon fibre base and aluminium lid barely moved when I applied lots of force to them and the hinges that hold the screen felt smooth and sturdy, keeping it perfectly in place at my desired angle.

The keyboard has the same rounded keys that we've seen from previous Dell units such as the XPS 14z. While I've been a little down on Dell keyboards in the past (especially the one on the XPS 15z), the backlit, chiclet keyboard on the XPS 13 felt crisper. The keyboard doesn't bounce around at all and the keys possess a good amount of travel and responsiveness. The layout is standard and the arrow keys are spaced and shaped in a way that makes them easy to feel for. The backlight can be invoked manually and looks great when typing at night. A timer turns it off when you've left the computer idle for about one minute.

An 85mm palm rest provides ample space to rest your hands as you type, and its material feels almost rubber-like in its softness and in the amount of grip it provides. Basically, it feels very nice. A Cypress Trackpad touchpad is installed and it's a large one (100x62mm) with a smooth texture. It has concealed left- and right-click buttons under the pad that are easy to press and I didn't have any problems using its basic navigation functions -- the pointer was responsive, accurate and moved swiftly across the screen.

However, I found its gesture performance to be poor. Two-finger scrolling was slow and sometimes erratic (going up instead of down and jumping all over the place) and three-finger flicks didn't always register. I updated the drivers to the latest version at the time of writing (2.3.6.25) and this actually made things worse: two-finger scrolling virtually stopped working and three-finger flicks almost never got recognised (even after disabling and re-enabling these features in the driver). I hope Dell comes out with another driver update to fix this issue because anyone who relies on these gestures every day will find this touchpad unbearable to work with. 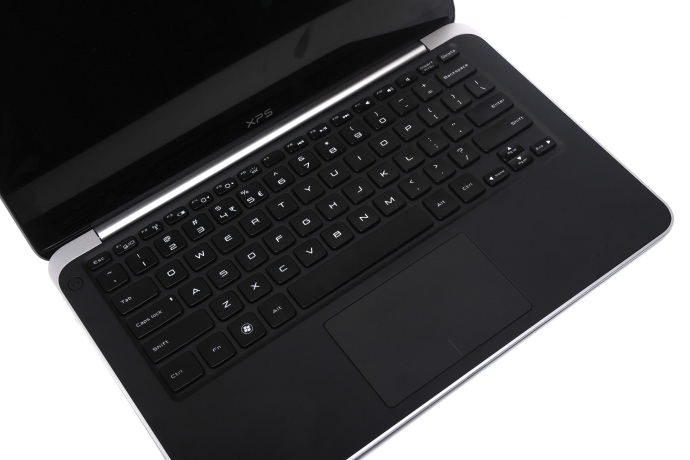 The large touchpad needs new drivers to fix its multi-finger gesture support, but it otherwise feels great to use.

As for the 13in screen, which has a native resolution of 1366x768, it looks very smart thanks to its slim bezel and edge-to-edge Gorilla Glass and it's a screen of decent quality, but it isn't great. Vertical viewing angles turned out to be narrower than I hoped, with colour shift and loss of contrast plainly obvious when viewing videos. The screen's colours also looked a little too pale and reflections on the Gorilla Glass were sometimes bothersome, even at maximum brightness. The other Gorilla Glass-equipped notebook that we've seen, HP's 14in Envy Spectre, had much better viewing angles and colour richness. An ambient light sensor is present, and it kicks in when the notebook runs on batteries, but it didn't seem to make any changes to the brightness as I made my way from bright to dark environments and vice versa.

It's true that the XPS 13 doesn't have a whole lot going for it in the ports department. All you get is one USB 2.0 port and a combination headphone and microphone jack on the left side (along with the power jack); there is a USB 3.0 port and a mini-DisplayPort interface on the right side (along with a battery indicator button and lights). It doesn't have a Gigabit Ethernet port and it doesn't have an SD card slot. While many users can probably live without these, I regularly use the SD card slot in particular, and often find a need to plug in to Gigabit Ethernet to transfer lots of large files.

That said, the XPS 13 has dual-band 802.11n Wi-Fi (courtesy of an Intel Centrino Advanced-N 6230 adapter), which can facilitate reasonably quick network file transfers. Furthermore, the storage capacity is 256GB (courtesy of a Samsung PM830 solid state drive) so you probably won't want to go clogging it up with many large files anyway. Besides, the lack of ports (and big ports such as Ethernet, especially), is to facilitate the notebook's slim frame, which is reminiscent of the ASUS UX31 Ultrabook.

The base of the XPS 13 tapers from the rear, where it is 19mm in height (as it sits on the desk with the lid closed, taking into account the rubber feet) to the front where it is only 13mm in height. Everything has been engineered to fit in such a tight space and it's not a unit that can be easily serviced by an end user.

On the inside, it has an Intel Core i7-2637M CPU, integrated Intel HD 3000 graphics, 4GB of DDR3 SDRAM and a 256GB solid state drive. It's a high-end configuration that gives the XPS 13 a little more grunt than most Ultrabooks on the Aussie market, and its price of $1699 for this configuration is competitive. In our Blender 3D rendering and iTunes MP3 encoding tests, the XPS 13 recorded 53sec and 57sec, respectively. Its Blender time is slower than that of the Zenbook UX31, which we tested with a slightly faster Core i7-2677 CPU, but its iTunes time is better, which we put down to the faster write time of the Dell's 256GB solid state drive. Even in the AutoGordianKnot DVD-to-Xvid transcoding test, the Dell recorded 1hr 5min, which is one minute faster than the ASUS Zenbook.

In CrystalDiskMark, the 256GB solid state drive recorded a read rate of 438 megabytes per second (MBps) and a write rate of 264MBps. In our own file transfer tests, where we simply duplicate a set amount of data, the drive recorded an excellent 163MBps. So far it's the fastest SSD solution I've seen in an Ultrabook. Graphics performance in 3DMark06 was 3380, which is about what I expected from the integrated Intel HD3000 adapter.

Overall, the Dell XPS 13 felt responsive and fast during everyday use and it has more than enough power for Web browsing, document creation, media viewing and multitasking. Even in tough tasks such as transcoding it performed very well. During times when the CPU is maxed out, the single fan in the chassis will kick in, and it can be quite loud. It will be very noticeable in a quiet room. Web browsing and word processing can also trigger the fan, albeit at a slower and less audible speed. The noise is understandable given the size of the fan and the small area through which the air needs to be pushed.

If you use the notebook on your lap (or chest as you lie in bed or on the couch) for prolonged periods of time, the vents, which are located on the underside of the chassis and at the rear, will get blocked and the base will heat up. It can get to a point where it becomes uncomfortable. 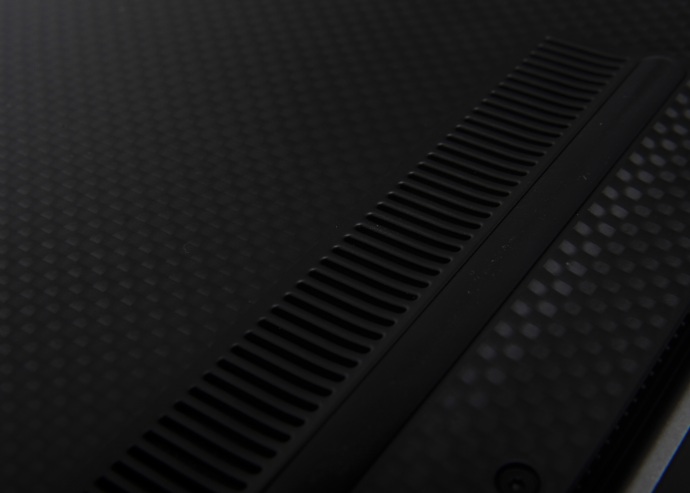 The carbon fibre base looks and feels great. Here you can see its vents and its texture.

The sound quality from the Dell's two speakers was more than adequate for such a small laptop. It wasn't as good as what I heard from the HP Envy Spectre, for example (it was a little flatter overall), but I still found it enjoyable while watching YouTube clips of 80s and early 90s funk and R&B tunes.

The enclosed battery in the XPS 13 has a 47 Watt-hour rating. It lasted 3hr and 27min in our battery test, in which power management is disabled, Wi-Fi is enabled, screen brightness is maximised and an Xvid-encoded video is looped. This isn't as long as Ultrabooks as such as the Toshiba Satellite Z830 (4hr 5min) or the HP Folio 13 (5hr 18min), and it just falls short of the time recorded by the Zenbook UX31 in the same test (3hr 38min). Nevertheless, you can get more life out of it if you reduce the brightness level and implement a sensible power management plan while you use the notebook for document creation and basic Web browsing. It takes about 3hr to fully charge. 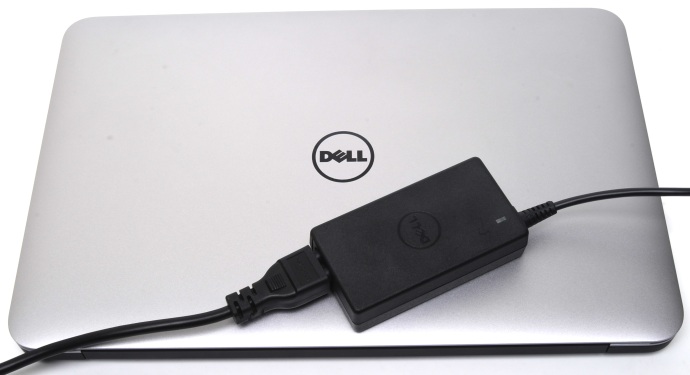 When it's all said and done, the Dell XPS 13 is a desirable 13in Ultrabook. Its build quality and feel alone make it worthy of consideration. I would have liked built-in Gigabit Ethernet and an SD card slot (especially while travelling), but I can understand their omissions. An HDMI adapter will be required if you want to plug this notebook into your TV and you'll also need to consider a powered USB hub if you want to access more than two USB devices at the same time. The touchpad still needs work on this model if you're a user of multi-finger gestures, but apart from that, the XPS 13 provides a wonderful level of user comfort.