A solid, all-round home PC that's good enough for a bit of gaming 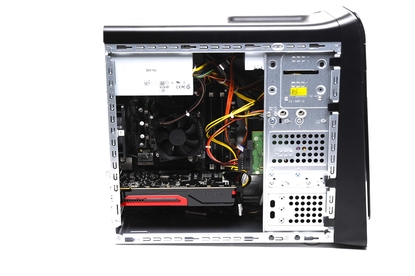 Dell's XPS 8500 is a small desktop PC with a neat style, a good range of connectivity and fast performance. Give it a go if you want a pre-built machine from a brand name vendor that can be used for productivity, multimedia and gaming.

Many years ago, if you were to buy a Dell XPS desktop PC, you'd get something that was behemoth-like in its structure, and one of the first things you wanted to do was open it up to see all the beautiful little bits that made it go so fast. These days, Dell has Alienware PCs with which it dazzles the crowds and its XPS series of PCs has become a much less distinctive offering.

The case for the XPS 8500 desktop that we are reviewing here is one that most people probably wouldn't look at twice if they walked past it in a store — it's similar to the XPS 8300's case that we reviewed in April 2011 and, in fact, it's a design that has been around for over three years now. However, it does house plenty of computing power that's perfect if you're a home user looking for an all-rounder-type of PC — and if you don't want to build one yourself.

The configuration of the XPS 8500 is centred around a third generation Intel Core i7-3770 CPU, which has a frequency of 3.4GHz, four cores and Hyper-Threading. It's a quick CPU, to be sure, and it means you can perform heavy multi-tasking as well run many taxing tasks on this system. For example, in our Blender 3D rendering test, a time of 16sec was achieved, while our iTunes MP3 encoding test finished in just 37sec. Both times are just as good as what we saw from the previous Dell XPS PC that we looked at, the lovely XPS One 27 (2710) all-in-one PC, which got 17sec in Blender and 37sec in iTunes.

Now you might be saying that it's no big deal for a tower PC to post scores that are only just as good as an all-in-one PC, but while the CPU power may be similar, the tower PC provides more overall grunt thanks to its speedier AMD Radeon HD 7770 graphics adapter. It can also handle up to 16GB of RAM via its four memory slots — although our test PC came with 8GB installed in two slots. A 2TB hard drive is installed, too, which means your data is packed in tight and will be quick to access in many scenarios, and there is a 32GB SSD to boost the boot-up time.

In tests such as our AutoGordianKnot DVD-to-Xvid file conversion test, the XPS 8500 put up a time of 31min, which is four minutes better than the XPS One all-in-one, while our ArcSoft MediaConverter test, in which we convert the DVD file to an MKV file, took only 6min 21sec — that's about one and a half minutes faster than the all-in-one. So you can see that this PC is terrific if you want something that can be used for more serious tasks than just running an office suite and browsing the Web.

Furthermore, it's a good machine if you want to get into some games, but note that it's not a high-end gaming machine. Its Radeon HD 7770 graphics card is not a top-of-the-range pixel-pusher, but it is capable of supplying playable frame rates at Full HD resolutions in many games. For example, we observed rates between 30 and 34 frames per second while running Battlefield 3 at the native resolution of our test monitor (1920x1200) and with 'high' detail settings. You can get more performance out of it if you use medium video settings and run a lower resolution, too.

Storage is handled by a 7200rpm hard drive with a packed-in 2TB capacity. It posted a fast result of 96.36 megabytes per second (MBps) in our file duplication test, while in CrystalDiskMark it recorded a sequential read rate of 225MBps and a write rate of 156MBps. The drive will slow down as more data becomes scattered, but these results, and in particular the CrystalDiskMark write rate, are fantastic.

Cold boot times were also quite fast on this machine, which took about 15sec before we could control it after pressing the power button. The PC that we tested came with Windows 7, but Dell now offers the XPS 8500 with Windows 8. If you're hesitant about getting a PC with Windows 8 because you'll have to learn about the new Start screen interface, then check out our Beginner's Guide to Windows 8, which discusses that plus more of the operating system's new features.

All of these components are housed in a just-big-enough tower case that has a glossy front panel and concealed 5.25in drive bays. It's a case that is perhaps best suited to a low-down position considering the location of two of its USB 2.0 ports at the top of the case, but there are USB 3.0 ports on the front that make it just as useful if it's placed on a desk beside a monitor. The front panel also has a multi-card reader installed (great for inserting an SD card after you've been out shooting with your digital camera), and a DVD burner/Blu-ray writer combo drive is hidden neatly behind the top 5.25in spring-loaded door.

The motherboard has a micro-ATX form factor, so it's quite small, but there are ample ports on its rear cluster for expansion. You get two USB 3.0 and four USB 2.0 ports, as well as Gigabit Ethernet, optical (S/PDIF) audio output, and analogue audio ports (front, rear, centre, sub-woofer, microphone, and line in). The graphics card has DVI, DisplayPort and HDMI ports, with support for 4K resolution. On the inside, the board has four DIMM slots and there are only two PCI Express x1 slots free for expansion.

Also installed in this computer is a mini PCI Express-based 802.11n wireless networking module (an Atheros AR5B225) with antennas that snake up to the top of the case. It's convenient if you want to place this PC in a location that isn't within cabling distance of your router and it also gives the PC Bluetooth. You can use this for Internet connectivity just fine, and it can also be used to stream music and video files over short distances. However, it's not a fast module and it only works in the 2.4GHz band; we recorded transfer rates of around 5MBps when using the PC to transfer files between 1GB and 2GB in the same room as our router.

Because it's a small case, it's not one that's easy to work on should you ever need to upgrade or replace a component. The hard drive bay, in particular, is mounted on its side and faces the rear of the machine. This means that the hard drives need to be mounted upright on their sides of the cage — it's not a layout that's friendly to multiple hard drives, even though there is one free 3.5in slot for a second hard drive. There is a spare 5.25in drive slot, too, but it is mostly used as a refuge for some of the cables. The power supply has a maximum power rating of 460 Watts.

The cost of this Dell XPS 8500 is $1898 without a monitor, but with a basic keyboard and mouse, which seems like a fair bit considering how cheap things have gotten over the last few years. If you were to build this PC yourself with the same (or equivalent) components bought from your favourite PC store, you could probably get it for closer to $1100. But if you're the type of user who doesn't like the hassle of building your own PC and you like the convenience of ordering a readymade unit from a brand name maker such as Dell, then you'll be pleased with what this PC offers.