We don't usually get excited about all-in-one desktop PCs because they're all usually much the same. However, the Dell XPS One 27 has so much going for it, it's hard not to be impressed. From its high resolution, 27in screen, to its 3rd gen Core i7 CPU and GeForce GT 640M graphics -- even the one-cable set-up procedure -- there's a lot to like about this unit. It looks good, it's great to use and, above all, it's powerful.

Dell's XPS One 27 (2710) is one of the most elegant and interesting all-in-one PCs we've seen in a while. It's not one of those fancy touchscreen-enabled PCs that can leave you wondering what to do with it; instead, it's a 27in screen with a stack of goodies packed inside its relatively thin profile, including a third generation Intel Core i7 CPU and an NVIDIA GeForce GT 640M graphics adapter. As far as all-in-one PCs are concerned, this one is as powerful as it is good looking.

All of the computer's components are housed within the body of the unit, including the power supply. It's not like many other all-in-ones where you have to dangle a boxy power adapter over the back of your desk by your feet; and because the power supply is internal, it means the XPS One 27 is one of the neatest computers on the market — only one cable snakes out from the rear, and that's the regular jug plug power cord. Even the keyboard and mouse that ship with the unit are cordless, with their transceivers also located within the chassis. You don't have to plug anything in except the power cord, and the only other task you need to undertake before booting up for the first time is to plug the batteries in the keyboard and mouse and switch them on.

The 27in screen has a native resolution of 2560x1440 and it's a stunning display, with plenty of contrast and brightness for photos and movies. The glossy finish can be annoying though, and reflections can take their toll if you place the unit in a location with lots of light sources behind or above you. The screen can be tilted back and forth a little to remedy this. Both HDMI in and out ports are available on the unit, so you can plug in to a secondary screen, or use the XPS's screen as a monitor for another PC or HDMI device.

We love the overall build quality of the unit, which feels solid from top to bottom. It's a relatively heavy unit, which is understandable considering it's almost a full-blown PC and a 27in screen in one, so you won't want to be moving it from room to room too often — although you certainly could if you were dedicated enough. There aren't any access panels for expansion or component replacement; there is a port cluster on the rear, and you can also find some ports on the left side of the unit.

Lots of USB 3.0 connectivity is present, including two such ports on the left side, next to the SD card slot and audio jacks, and four more on the rear port cluster. That rear cluster also contains the aforementioned HDMI in and out ports, as well a Gigabit Ethernet port (an Atheros AR8161/8165 controller), optical audio output (S/PDIF) and the power port. You'll find the power button on the right side of the unit, along with a slot-loading optical drive that can read and write DVD media and read Blu-ray media.

The design of the unit looks nice and it's a user-friendly unit overall. We particularly like the little things, such as the sensor in front the capacitive touch buttons on the front panel, which makes them light up so that you can see exactly where they are before fumbling around for them. The buttons control the on-screen display menu for the monitor. 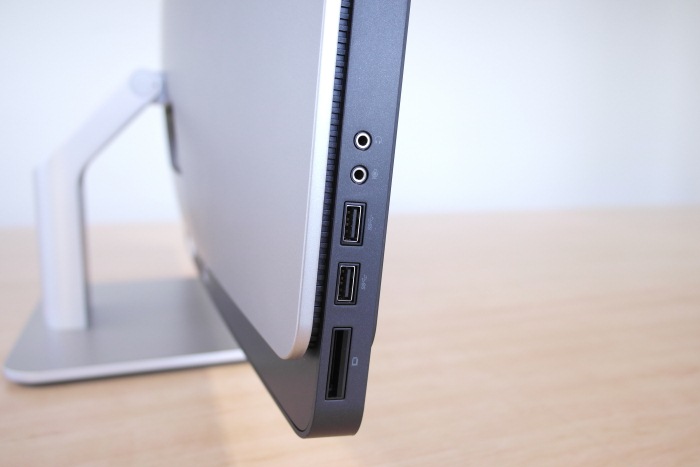 The left side: two USB 3.0 ports, an SD card slot and audio ports. 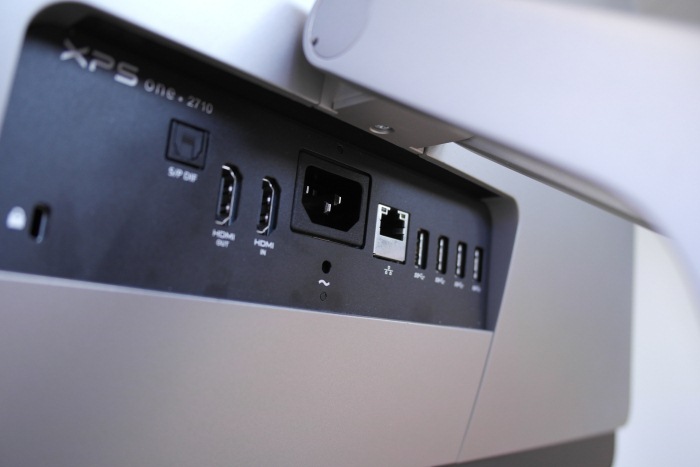 On the inside is where the most impressive elements of the XPS One 27 reside, and we're talking about the configuration. There is a third generation Intel Core i7-3770S CPU with a frequency of 3.1GHz and the ability to run eight software threads simultaneously; there is 8GB of DDR3 SDRAM installed across two memory slots; you get a 2TB, 7200rpm hard drive; graphics are handled by an NVIDIA GeForce GT 640M adapter, but there is also Optimus switching technology implemented so that you can switch to the integrated Intel HD 4000 graphics of the CPU if you don't need all that processing power.

In our performance tests, this configuration put up numbers that show the XPS One 27 to be a powerful computer not just for office tasks, but for video editing, design work and gaming. A time of 17sec was recorded in the Blender 3D rendering test, 37sec in the iTunes MP3 encoding test and 34min in the AutoGordianKnot DVD-to-Xvid conversion test. We also ran the ArcSoft MediaConverter 7 test to convert a DVD file to an MKV file, which took a time of 7min 54sec. All of these times are much faster than what a typical, mid-range PC can do.

The best part though, is that the XPS One 27 can be used for gaming. Its mid-range NVIDIA GeForce GT 640M adapter recorded 12893 in 3DMark06 and P1978 in 3DMark11. It's an adapter that will give reasonably smooth frame rates for games such as Battlefield 3, albeit at a much lower resolution than the screen's native 2560x1440 pixels. In 3DMark06, the Intel HD 4000 graphics recorded 6714, so the NVIDIA adapter serves up double the speed when crunching 3D scenes.

Storage is handled by a 2TB drive that spins at 7200rpm. It has a high data density that also adds to the overall performance of the drive, and this was shown in our data transfer tests, where an average rate of 96.5 megabytes per second (MBps) was achieved. In the CrystalDiskMark test, a read rate of 287MBps was recorded, along with a write rate of 88.26MBps.

When it was under a full load, the XPS One 27 consumed a maximum of 125W of electricity; when it was idle, it consumed 72W. Not bad at all for a machine with a high-end CPU and a very large monitor. Noise from the fans wasn't much of a problem while the machine was under a heavy load, although in a very quiet room you will hear them. Heat escapes through the vents at the top of the unit.

The overall usability of the Dell XPS One 27 is high. We didn't have any issues with the ports on the side, the power button is within easy reach and the optical drive works well — even though it's a vertically-installed slot drive, discs don't tumble out of it when they are ejected. The massive resolution of the screen is perfect for multi-tasking, allowing two almost full-sized windows to be put side by side on the screen using Windows' Aero Snap feature. We like the fact that the screen can also be used as a second display for another computer, or to plug in a set-top box or any other device, but in many cases you won't be able to use anything more than a resolution of 1920x1080. 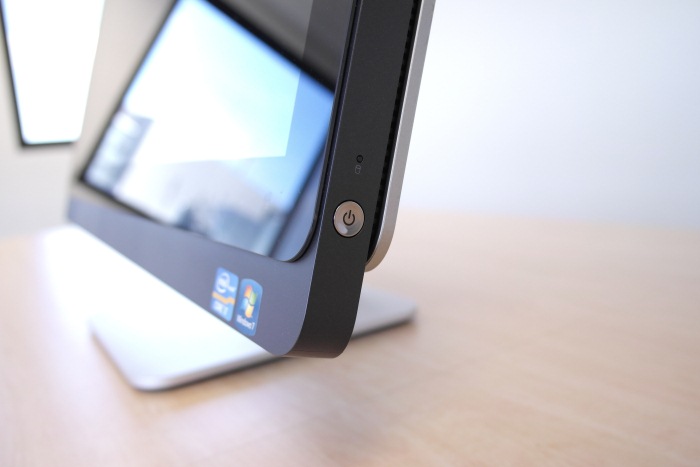 The easy-to-reach power button on the right side. 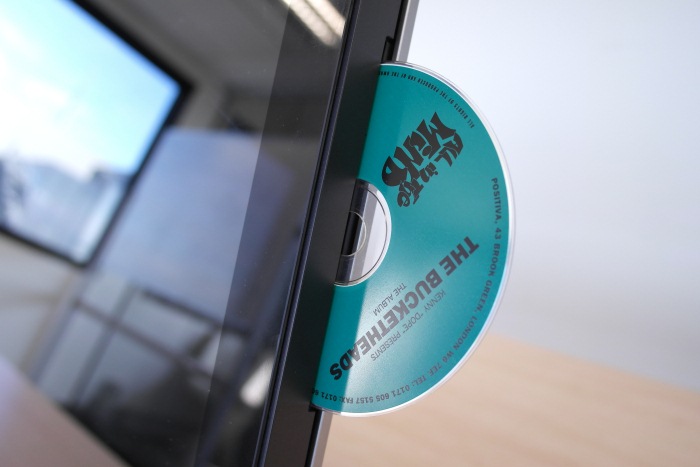 The slot-loading optical drive won't spit discs to the floor as they're ejected.

The keyboard that ships the unit is smaller than a regular keyboard, but it has keys that are comfortable to type with. A dedicated number pad is present and there are volume controls that can be used in conjunction with the Fn key. We don't like the mouse though. In fact, it feels terrible. This is mostly because the whole top cover (including the buttons) is designed to come off and the buttons aren't solidly connected to the base. When left-clicking, the button sometimes got stuck in the pressed position and caused all sorts of unwanted selections or drag operations.

Speakers are located on the bottom of the unit and they are decent for everyday use. They can fill up a room and they can supply an adequate amount of bass. If you turn them up too loud though, they will distort — we found the optimal listening volume to be 50 per cent. The audio jacks on the side are convenient if you want to plug in headphones or a microphone for Skype conversations. There are microphones at the top of the unit either side of the built-in webcam, but they aren't great. 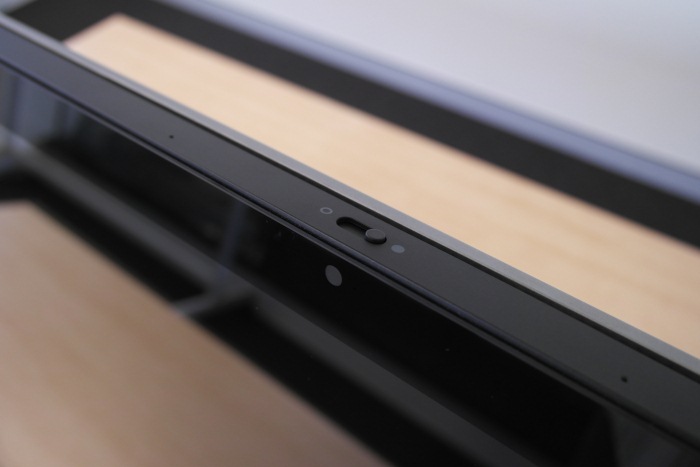 The webcam can be covered when not in use.

A built-in wireless adapter is available for the unit and this means you can get online straight away. Ours had a single-band Atheros AR8161/8165 module installed. You can also configure the XPS One 27 with an Intel Centrino Advanced-N 6235 module that supports Intel Wireless Display (which can be used if you have devices such as the Belkin ScreenCast or Netgear Push2TV plugged in to your TV). You also get integrated Bluetooth 4.0.

Our opinion of the Dell XPS One 27 (2710) is that it's a fantastic all-in-one PC that's perfect for anyone who wants a neat-looking machine that's simple to set up, yet also very powerful and matched up to a huge screen. We had lots of fun using this PC and found its performance to be top notch. While it's a unit that's hard to expand, its configuration is strong enough so that you won't be left wanting more unless you are a very demanding user. For everyday work, multimedia tasks and even for gaming, this all-in-one PC is well recommended.