These high-end headphones suit executive travellers with space to spare 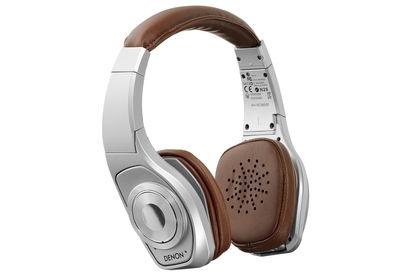 When Denon launched its new range of headphones, we were most interested by the high-end Music Lover and travel-focused Globe Cruiser models. The AH-NCW500 comes from the company’s Globe Cruiser range, aimed at jet-setting executive types that are constantly on planes and in noisy public places.

The Denon AH-NCW500 headphones are the traditional over-the-head type that is common for active noise cancelling models, but they’re moderately sized and rest on the wearer’s ears rather than over them.

The headband sits slightly back from the ear-cups of the headphones — if you’ve got the ear-cups positioned facing directly forwards, the headband will sit back slightly on your head. We like this design since it means the band is more likely to sit on the crown of your head, reducing any incidence of hat-hair.

The headphones’ headband telescopes around an inch on either side, so the AH-NCW500 should suit most head sizes, although extra-small (children’s) heads might find them a little uncomfortable.

Our test headphones were finished in a light silver plastic and brown leatherette, but there’s a black-and-black version available as well. The soft leatherette is comfortable, but can feel a little sweaty if you’ve been wearing the headphones for some time.

We do think the Denon AH-NCW500 headphones are sturdy, but we question the use of what feels like slightly hollow plastic — if it were a little thicker and heavier, the headphones might feel more solid and look a little more like they deserve their $549 price tag.

The carry case that the Denon AH-NCW500 headphones ship inside is a hard-shell one, with a soft fabric finish. Since the headphones themselves can fold flat, the case is reasonably thin, but it’s quite wide and tall and will take up a fair bit of room on a carry-on bag.

The Denon AH-NCW500 headphones have built-in active noise cancelling with a rechargeable Lithium-Ion battery, and Bluetooth wireless connectivity. The battery charges through a micro-USB port hidden behind a black plastic cover on the headphones’ bottom.

Your music (playing from an A2DP-capable device like an iPhone) can be controlled from the headphones themselves, with two multipurpose wheels on the outside of the Denon AH-NCW500s’ ear-cups. Both ear-cups have buttons to pause, play or skip tracks, and the right ear-cup has a jog dial that can be twisted clockwise or counter-clockwise to raise or lower volume.

The base of the left ear-cup also houses the power switch for the headphones’ noise cancelling circuitry. External microphones pick up outside noise which is cancelled out by the headphones, quietening down the whir of air-con or aircraft engines when you’re wearing the AH-NCW500s.

It’s important to note that there’s only a little evidence that either Bluetooth or noise cancelling is enabled, so it’s easy to forget that either one is turned on. We drained the headphones’ battery twice during our testing through forgetfulness.

The active noise cancelling from Denon’s ambient cancellation circuitry in the AH-NCW500 is effective, but generally unobtrusive. There’s definitely none of the introduced high-frequency hiss that cheaper noise cancelling headphones can introduce, but it’s actually quite difficult to notice when the noise cancelling is activated.

The noise cancelling seems to work across a broad range of frequencies, although it does a better job of blocking out the low hums of laser copiers and air-conditioning in our office than the sharper taps of fingers on keyboards. It doesn’t completely block out annoying ambient noise in the same way that the excellent Audio-Technica ATH-ANC9 can, though.

Bluetooth works well, connects without any hassle, and has an acceptably long range. We tested the Denon AH-NCW500 up to around eight metres from our test iPhone with success and no drop-outs, and up to around ten metres through a wall before we lost the connection.

The Denon AH-NCW500 headphones can operate with and without noise cancelling enabled. We did half of our testing over Bluetooth and half through the wired 2.5mm/3.5mm audio jack — both sound effectively the same as long as you’re within a suitable range for a consistent Bluetooth connection.

The headphones have an interesting aural character. The best way to describe it is to say that the Denon AH-NCW500 sounds quite ‘hollow’, with slightly less mid-range and mid-treble than we were expecting, with more bass and more high treble.

The overall sound from the AH-NCW500 is quite musical — strong bass and sharp treble, with a bit of a hole that leaves acoustic music and male vocals seeming a little drawn-back compared to bass hits and the crash of drum cymbals.

The Denon AH-NCW500 is a good-sounding pair of headphones, but we don’t think its particular aural signature will be for everybody, so we’d definitely recommend auditioning a pair before committing to the $549 purchase.

The Denon AH-NCW500 headphones are well-constructed, convenient (with seamless Bluetooth and effective but unobtrusive noise cancelling), and have good sound quality. We think the quiet mid-range might put off some listeners, so we’d recommend you try before you buy.