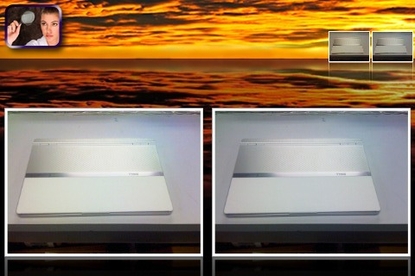 Digital Arts' iTake-5 makes your iPhone photos look better through a proprietary photo optimisation technique. It doesn't always work, but the small improvements it does provide can make a world of difference.

Joining the large array of photo manipulation iPhone apps like ColorSplash is Digital Arts' iTake-5, which tweaks the colours and brightness in photos. This iPhone app can enhance photos but it has an unattractive and confusing interface.

Digital Arts already provides a similar application for Windows and Mac OS, as well as plug-ins for a variety of video and photo editing applications. Both the iPhone app and the desktop application use the company's proprietary Xe847 photo processing technology, which analyses and enhances the colour, brightness and contrast of photos.

The app uses large and unwieldy buttons on its main menu, and the screen on which the optimised photos are shown features a distracting sunset background. Thankfully, tapping the top-left of the screen gets rid of the background in order to magnify the before and after photos. A simple black background would have sufficed.

Once a photo is chosen from the camera roll or photo album, iTake-5 processes the photo and provides you with a choice of five different optimised photos. You view each option side-by-side with the original photograph, and can choose which you prefer of the two. The magnification mode allows you to zoom in using a multi-touch gesture.

Photos are processed within five seconds, but the results can be hard to notice. We tested the app with several photos of different objects and subjects takin in a range of lighting situations. For the most part, the photos from the iPhone's camera were brighter and slightly more vivid once processed. However, some of the enhanced photos actually had more noise than the original image; this wasn't often the case.

We experienced some stability issues while using iTake-5. Though it doesn't appear to have memory issues (memory-heavy iPhone apps tend to slow down with use), it did crash at random intervals (often when we pressed a button or attempted to choose one optimised photo over another).

iTake-5 won't work miracles, but it can make up for some of the shortfalls of the iPhone's camera and spruce up your photos. The free version of this iPhone app limits the final resolution of a photo — it will only save at 480x320 pixels — but if you aren't planning on taking the photos off your iPhone, the free version is all you will need.