DrayTek Vigor 2952P review: Doesn't look pretty but does get the job done 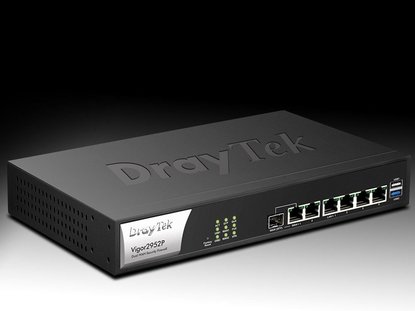 The DrayTek 2952P isn’t quite an all-in-one networking solution, nor is it necessarily the cheapest such solution. Fortunately, it is a reliable one.

DrayTek might not make networking products as “sexy” as the sleek, ultramodern lifestyle routers coming out of brands like Linksys and Netgear these days. However, if you’re a small or medium-sized business looking for a no-nonsense networking solution unlikely to fall over, they remain a brand and option well worth investigating. Sometimes, reliability is worth more than anything else.

While it doesn’t quite sit at the very top of the company’s stable, the DrayTek Vigor 2952P is far from a sloucher. It’s envisioned not quite as a simple but reliable option that appeals to businesses who need a strong network framework. Feature-wise, it’s got all the usual suspects and if you’re looking for something that can support a ton of VPN tunnels, there isn’t necessarily a whole lot out there that can match it tit for tat.

It’s a serious product that takes itself pretty seriously but, sometimes, that’s what you want.

The DrayTek Vigor 2952P is Dual-WAN security firewall router designed for small to medium businesses. It’s equipped with a matching pair of Gigabit Ethernet WAN interfaces (with WAN 1 usable as a SFP port for fibre module installation), 4 x Gigabit PoE LAN ports and a matching set of USB 2.0 and USB 3.0 ports. The Vigor 2952P has a rated throughput of 600Mbps and supports up to 100 concurrent VPN tunnels (including 50 SSL VPN tunnels).

These days, it sometimes feels like networking brands - especially the big ones - spend almost as much time designing and refining the exterior of their devices as they do the insides. By contrast, the DrayTek Vigor 2952P feels decidedly traditionalist. This is a business-grade router. It conforms to all the expectations that come along with that and never once does it suggest anything to the contrary.

Designed to be mounted in a server room (the unit comes with a set of mounting brackets designed for use with a standard 19-inch rack or cabinet), it’s packing plenty of ports - along with the usual status LEDs - up the front, and hides the power cable up the back. Compared to the regular Vigor 2952, the LAN ports on the Vigor 2952P are PoE (power over Ethernet), potentially making it a good fit for surveillance networks. All told, it’s a weighty, clunky metal box that feels tough enough to take a hit. Or, at least, hold up a particularly-demanding business network.

That said, the device doesn’t act doesn’t actually offer up any wireless connectivity in its own right. It’s designed to be used as a nexus for up to 20 different wireless access points. Depending on your circumstances, this may or may not be a dealbreaker.

There is a variant model, called the Vigor 2952Pn, which does come with 802.11n connectivity (courtesy of a set of antennas). Regardless, it’s definitely worth keeping this omission in mind if you are only looking at the baseline model.

On the software side of things, the interface for modifying the Vigor 2952P’s setting is embodies a similarly bare-bones approach. It’s simple enough to use, making it quick and unabashedly straightforward to check in on the overall status of your network.  It isn’t particularly intuitive but it does a good job of ticking all the right boxes. If you know what section of the 2952P’s settings you’re looking for, you can generally get there pretty fast.

In terms of performance, there’s not a particularly lengthy song to be sung about the DrayTek Vigor 2952P. It does what it says on the box. Once setup, we had no issues when it comes to reliability.

While we didn’t encounter the kind-of real-world situation where it is designed to come into play, the Vigor 2952P does come with the ability to seamlessly swap between the two WAN connections, using one as a fallback should the first drop out. At face value, this capability does seem like a smart - if simple - inclusion. That said, it’s definitely worthing considering whether you’ll actually make use it before you start thinking of it as a dealmaker for the router.

Obviously, if you want to get the most out of the box, you’ll want to use it alongside other DrayTek products. Specifically, the company’s VigorACS SI Central Management software - which the 2952P comes ready to cleanly integrate with. However, you will have to budget for it. DrayTek do bundle in a free 30-day trial version of VigorACS with every router. Beyond that, you’ll have buy a license from them. These are available in lots of 50 nodes.

In terms of how it rates against the competition, the biggest thing that the Vigor 2952P has going for it here is the SFP and PoE support, which isn’t found in an enormous of business routers. Compared to the Linksys LRT224 or TP-Link’s ER6120, it doesn’t have quite as much NAT throughput. It is also a little more expensive.

All told, the DrayTek Vigor 2952P is a dual WAN router that clearly favors function over form. It gives you every tool in the toolbox and makes it easy to leverage them towards creating a business network experience that’s easy to setup, easy to manage and reliable enough to give you peace of mind between the two.

It isn’t quite an all-in-one networking solution, nor is it necessarily the cheapest such solution. Fortunately, routers don’t have to be good looking to inspire confidence.

They just have to get the job done.