Bash Party has a lot of content to wade through with levels doled out between the single-player mode, multiplayer co-op and versus modes 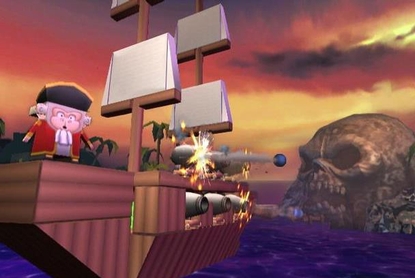 When someone boots up Boom Blox in the GP office, it's always a grand spectacle. With addictive, physics-based gameplay and brand new multiplayer modes, Boom Blox Bash Party is no exception.

The original Boom Blox was everything a Wii game should be. Like Wii Sports, it was original, fun and took full advantage of the Wii Remote's unique capabilities; the GamePro staff had a great time playing through it and our only complaint was that it led to a lot of sore arm muscles. Bash Party is a great follow-up that adds some interesting new mechanics but really, it's just more of the same, which is exactly what we wanted.

Boom Blox Bash Party builds successfully upon the foundation of the original by giving you more ways to knock stuff around. You still have access to various thrown objects like balls and bombs but you also get new toys like a slingshot that lets you flick objects around the hyper-color levels and virus blocks that 'infect' anything they touch. The developers have also expanded upon the puzzle-like nature of the stages; in some levels, one or two well-placed shots will send every block flying off the playing field in a Rube Goldbergian display. For example, in one level, I used paint balls to strategically 'paint' objects in a specific order; by doing so, I was able to initiate a chain reaction that cleared the board in one go.

The physics in Bash Party are particularly impressive, with blocks falling and shifting in a realistic fashion. I realize that it's not complex stuff compared to other next-gen games but in a game like Boom Blox, it's an important consideration. The accurate physics allows you to do things like bank shots and angle shots, though most players will probably take the "fastball down the middle" approach. On that note, the controls are still rock solid, though your timing has to be spot on or you can end up with pathetically weak throws.

Bash Party also has a lot of content to wade through with levels doled out between the single-player mode, multiplayer co-op and versus modes. There's also an option to download levels using the Wi-Fi (we weren't able to try it out so we can't vouch for the quality of the content, but it's a nice feature to have) and the level creator is sure to keep enterprising players busy for a while. The included levels are a mixed-bag: some feature terrific layouts that encourage replayability while others had me quitting in disgust after repeated failed attempts; thankfully, you can skip past difficult or annoying levels by spending some in-game currency.

As a multiplayer experience, Bash Party succeeds but it's less a party and more of a social gathering. Because every player will want to survey the board and line up the perfect shot or move, matches take on a slow and methodical pace. Still, it's a great title to break out when you have people over, especially if you're trying to keep children entertained; younger gamers will be enthralled by the visual style and the "it's okay to break stuff" gameplay-just be sure to firmly secure their wrist straps before letting them loose.