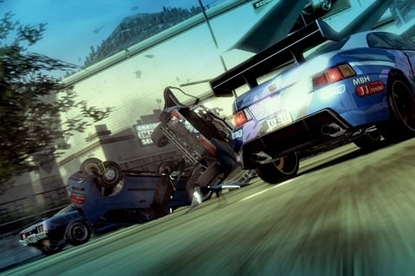 It won't wow you with a high degree of realism like Gran Turismo will but for pure racing action, it is one of the best titles ever produced. Give it a chance and you might find yourself having the most fun you've ever had in a virtual car.

Think the rush of triple-A titles is over? Think again: Burnout Paradise is a bona fide winner and it just might be the best action racing game ever created!

There is no denying the allure of the Burnout series. Like a souped up racing car, the Burnout games have always been about three things: speed, speed and more speed. Putting the virtual pedal to the metal in Burnout was as close as we were going to get to becoming a daredevil street racer, and it let us do it without the fear of reprisal from the authorities and the risk of ending our lives in a fiery automotive crash.

For pure racing action, there was no other franchise that delivered on all counts. From the slick engine to the awesome damage modelling and physics to the nose-bleed inducing sensation of virtual speed, Burnout had it all.

And just when we thought the bar couldn't be pushed any higher, along comes the best Burnout yet: the aptly named Paradise. With its open-ended world and its go anywhere/do anything philosophy, Paradise shines with a beautiful new-gen sheen. It's everything you would expect from lauded developer Criterion.

We were lucky enough to pull on our driving gloves and slip behind the wheel of this ultra slick racer so click through to the next page to read our impressions and see why Paradise is an action racing fan's dream come true.

We'll see you out on the open road.