It's easy to think back on how great Fight Night Round 3 looked for its time, but a lot has changed in the three years since its release. Luckily, Round 4 is no slouch. 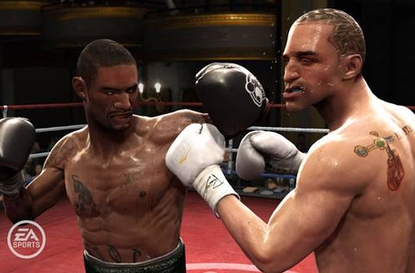 Fight Night Round 4 lacks some of the wow factor of its predecessor, but it builds upon the strengths of Round 3 and corrects most of its weaknesses. Three years is a long time to wait for a sports sequel, but Round 4 is an excellent and necessary upgrade for all Fight Night fans, and it reasserts the series as the (relatively) uncontested titleholder across all simulation-style boxing games.

It's hard to forget the first time I landed an orbital-crushing haymaker in Fight Night Round 3: my vicious blow sent ripples across the opponent's cheeks and bodily fluids flying towards the canvas. No other boxing sim since has come close to recreating that amazing combination of visual brutality and gameplay finesse until now — Fight Night Round 4 is finally here and while it may not have the same revolutionary impact of its predecessor, it's a major step up in nearly every imaginable way.

It's easy to think back on how great Round 3 looked for its time, but a lot has changed in the three years since its release. Luckily, Round 4 is no slouch: the fighters look better than ever, with increased detail and more lifelike animations, and the upgrade to 60 frames per second irons out the clunky movements and other hiccups from the last game. Fighters still show visual damage and fatigue over the course of a match, but unlike Round 3, the user interface (with health, stamina, and damage meters) is on by default, so you'll have to manually disable it if you're looking for a less intrusive on-screen experience. With or without the meters, the knockdown punches remain a highlight, with the action slowing down and the camera zooming in for that exact moment that your perfect punch reaches its destination.

Well worth noting is the increased emphasis on peripheral details outside the ring, which help create the sensation of fighting on the world stage. As you weave around the ring, you'll see photographers lining up their shots, judges keeping score, and even trainers shadowboxing near the corner. Also appreciated is the presence of Teddy Atlas who joins play-by-play man Joe Tessitore to offer compelling insight about the fighters and the current state of the sport. The dialogue gets recycled but it's worthwhile and interesting.

From its outset, the Fight Night franchise has always revolved around the Total Punch Control analog scheme, but it reaches a newfound level of speed and fluidity in Round 4. Launching basic jabs, hooks, and uppercuts requires simple movements of the right analog stick, and they're more easily chained than in Round 3. You'll link together combinations with just a little practice, and a freshly tweaked physics engine means even off base and glancing blows will have some impact on your opponent. Haymakers are now executed by holding a shoulder button in concert with analog movements, giving you a bit more control over when exactly to take a chance and throw a potentially round-changing punch.

And 'chance' is the key word here: should you miss, you may leave yourself wide open for a counterpunch, which can turn your powerful attempt into a quick trip to the mat. Should you find yourself on the floor, you'll need to regain vertical orientation using the analog sticks, which becomes increasingly difficult as the fight rages on. Assuming you make it through a round, you'll find a much different corner experience than in previous series entries. Rather than physically address swelling or cuts, you'll earn points from each round (for landing a high percentage of punches or stunning/knocking down your foe) that can be spent to recover your health or stamina, or reduce your accumulated damage.