G.I. Joe: The Rise of Cobra

G.I. Joe: The Rise of Cobra simply wouldn't exist if it wasn't releasing alongside a summer blockbuster of the same name 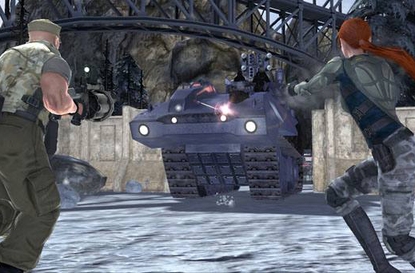 While I wasn't expecting too much from G.I. Joe as a whole, I walked away with the impression that, while it wasn't absolutely horrible, it really didn't leave much of a lasting impression either. I love mindless shoot-em-up gameplay as much as the next guy, but in this age of innovation (and certainly in this economy) you can't help but expect more bang for your buck.

Another summer movie, another video game tie-in. A simplistic action-packed escapade through and through, G.I. Joe never quite amounts to much more than "just another shooter."

G.I. Joe: The Rise of Cobra simply wouldn't exist if it wasn't releasing alongside a summer blockbuster of the same name. As much as I hate the "movie cash-in" argument, after spending some extensive time with EA's latest run-and-gun shooter, there's really no mistaking this simple fact of life. While many movie tie-ins try to separate themselves from their source material -- sometimes pretty successfully (Wolverine: Origins) and other times rather miserably (Terminator: Salvation) -- there's no denying that without the release of G.I. Joe the Movie the Game, the world of gaming would keep on turning and nobody really would have noticed a thing.

While it would be incredibly easy to simply dismiss G.I. Joe as another lacklustre summer tie-in (which, when all is said and done is pretty close to the truth) G.I. Joe doesn't resent its Hollywood roots or attempt to hide its movie-to-game nature. If anything, G.I. Joe revels in the tone of a big budget explosion extravaganza, with bullets flying and barrels exploding as regularly as a heart beat. While G.I. Joe: The Rise of Cobra isn't necessarily a good game (there are certainly much worse franchise tie-ins on the market) its trademark "shoot everything" appeal may just have leave you smiling in memories of quarter-crunching in the arcade.

While the "well, it isn't too bad" argument may not prompt anyone to rush out and pick up a copy of G.I. Joe, it's certainly worth mentioning that, while it falls short on numerous occasions, there is plenty of mindless fun to be had with the title. In the vein of arcade classics such as Contra, Metal Slug and Shock Troopers, G.I. Joe's main mission objective is expertly summed up in one of Sgt. Stalker's in-game orders: "If you can see it, blow it up." Selecting two members of the G.I. Joe squad at a time, players are slapped in the middle of the action and asked to blow everything in sight to kingdom come -- nothing more, nothing less. This arcade-style "eviscerate everything" simplicity may be unappealing to gamers expecting more of a challenge, G.I. Joe can only coast so far on its nostalgia factor alone. This repetitive gameplay only increases in challenge thanks to bigger waves of enemies and can become quite tiring after a while. While G.I. Joe attempts to mix it up a bit with a wide variety of Joes to choose from, each with their own special attacks, most players will spend the entire game simply holding down the "shoot" button and waiting for the next checkpoint to pop up.

G.I. Joe's presentation certainly isn't anything to write home about. Blocky characters that bear little resemblance to their film counterparts awkwardly trot across the screen as a fixed camera pushes players forward. Repetitive military music blares through your speakers, and armies of awkwardly generic Cobra minions constantly shout laughably horrible threats. Many of G.I. Joe's aesthetic flaws could have easily been overlooked if the overall experience amounted to a bit more than "shoot, kill, next area," but as the case may be... well, let's just hope you brought plenty of ammo.