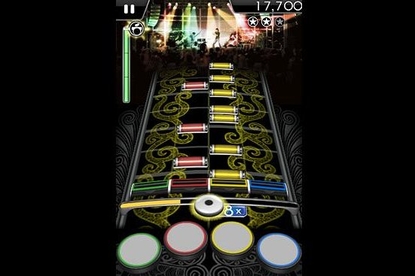 Rock Band for iPhone is fun and combines good graphics with excellent sound. The relatively inexpensive song packs are a bonus, but considering the price and the competition, it's missing a few key features that would really make it rock.

It was only a matter of time before the Rock Band phenomenon reached the iPhone after proving a success on consoles, including Nintendo's handheld DS. Rock Band for the iPhone provides fantastic visuals, a great list of songs and good multiplayer gaming. Unfortunately, it's expensive, you need to pay for extra song packs and the voice mode is severely limited.

EA's Rock Band for iPhone works in much the manner as the console games. Colour coded "notes" scroll towards the bottom of the screen and you have to tap the control with the matching colour at the right time. As there are no peripherals like guitars and drum sets, the game play remains the same across all "instruments" — guitar, bass guitar, drums and microphone.

Visually, Rock Band for iPhone looks superb. Graphics are intriguing and colourful and take advantage of the iPhone's large screen. The visuals are quite repetitive, but as you'll be concentrating on the scrolling notes, this isn't a huge deal. Sound is also excellent, as would be expected from a game that revolves around music.

Compared to console versions of the game, Rock Band for iPhone does take quite some time to adjust to. Though tapping your fingers on the screen sounds easy, the iPhone display is quite narrow when playing in medium or hard modes — the learning curve is steep and this will result in a lot of frustrated fans booing your performances as you mistime note after note. It’s a shame Rock Band doesn’t offer a landscape mode.

We enjoyed the solos offered in the guitar mode, but the lack of drum fills (seen in the console versions) is a bit disappointing. We also wish there was an alternative way to activate the overdrive function — though quickly tilting the iPhone towards you while playing sounds easy enough, we found it was a hit and miss affair. Often it would take two or three flicks to activate, and it meant we missed a couple of crucial notes.

The most disappointing aspect of Rock Band for iPhone is the voice mode. It doesn't actually use your voice at all. Instead it works exactly like the other modes — by tapping coloured icons, though this time they are situated on the left of the screen rather than the bottom. Considering the iPhone has a microphone (though the iPod Touch doesn't), we can't understand why EA has neglected this feature. It may as well not have offered it at all, because it's virtually identical to the other modes.

The main game mode is World Tour, which consists of four venues around the world that have five songs to play, though two of them need to be unlocked by achieving a three-star rating on the venue's other tracks. If you're in a hurry, you can also jump straight into a quick play mode — simply select the track and instrument and you're away.

Rock Band for iPhone comes with 20 songs (five of these are locked though). You can purchase more songs from within the app itself. These are priced at $1.19 for two songs including tracks from the Foo Fighters, Smashing Pumpkins, Lenny Kravitz and 30 Seconds to Mars.