When the first Skate debuted, it offered up a realistic simulation-based alternative to the unrealistic circus that the Tony Hawk franchise had become. 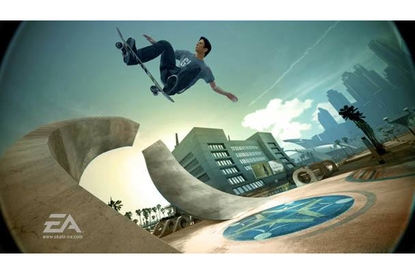 The first Skate was a refreshing take on virtual skateboarding, so expectations were high for this one. Maybe they were a little too high: Skate 2 doesn't quite deliver the revolutionary skating experience that we were all hoping it would be. It's still a lot of fun and has a lot to offer, especially with its awesome multiplayer modes, but the franchise is still a ways away from living up to its full potential.

When the first Skate debuted, it offered up a realistic simulation-based alternative to the unrealistic circus that the Tony Hawk franchise had become. Now, the sequel is here with some subtle improvements that push virtual skateboarding to new heights. Still, it's pretty obvious that this franchise has some work to do before it can fully knock the Birdman off his perch.

Taking place in New San Vanelona, Skate 2 follows in the skidmarks of the original. Unfortunately, prior experience with the first installment is necessary if you hope to start playing right away; Skate 2 isn't a game where you can pick up the controller and start flipping your board around. The innovative controls definitely take some getting use to. But that isn't necessarily a bad thing. Landing tricks can be more difficult than necessary but when you do pull off a sick trick it makes you feel unstoppable.

The game features a deep Career mode that adds a few new events such as the Hall of Meat and Tranny. The Hall of Meat events are by far one of the most addicting challenges where the aim is to bail off your board and eat as much concrete as you can. The Tranny contests are also exciting but suffer from the same problem as most other challenges-crowded level designs which makes it hard to execute tricks to rack up points.

Put On The Red Light

Skate 2 also has some iffy design problems that definitely cut into the fun. A good example is the addition of Big Black, the lovable bodyguard from the MTV show Rob & Big. For a fee of five hundred dollars, he'll take out the pesky security guards and give you five minutes of freedom to skate around in a restricted area. Unfortunately, there are skate stops-those little metal guards that they use to discourage skaters-planted everywhere, which seriously hinders your ability to line up tricks. You can deal with the stops by phoning your pal to come remove them for a hundred dollars but it seemed like an unnecessary barrier to overcome.

Thankfully, the refined multiplayer component makes up for the poor design choices found in the single-player mode. You can freeskate with friends and choose from over a hundred different events. The transition from online freeskate to multiplayer challenges is seamless as well. The events can go one of two ways, either a competition where you are pitted against eachother or a co-op event where you must work towards a common goal. Winning events that you suggest are the ultimate grounds for smack talking and the volume of various events is seemingly never ending so hours upon hours of fun is to be had.

Skate 2 does have a lot to offer but it falls short in a lot of ways. Its realism feel is great when it comes to technical aspects like tricks and controsl but it's taken one step too far. If I wanted to get harassed by security and constantly get intimate with the asphalt, I would go hop on a skateboard in real life. Still, the solid multiplayer and incremental improvements make this a compelling choice for virtual skaters. And hopefully, they'll get it right with Skate 3.