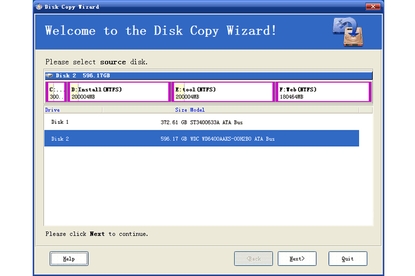 While Partition Master Professional 3.5 does offer the same tools as other partition managers, we feel it's a bit too unpolished to be a competitive alternative. We wouldn't throw away the free Home Edition of the software — which lacks 64-bit support and a few minor features — but the Professional version just doesn't make the grade.

Easeus employs the same basic user interface you've probably seen in Windows for years. It uses linear graphical representations of the partitioned drive(s), showing their relative sizes and their free and used space, with text details below.

But the font Easeus has chosen to use for the interface of Easeus Partition Master 3.5 Professional Edition, a dated serif courier type, is oddly proportioned for the screen. It's certainly readable — with a little squinting — but something better could have been used.

In addition, the interface of Easeus Partition Master 3.5 Professional Edition is a bit limited. Resizing a partition can be done by either entering hard numbers into a text area for the values you want or by dragging the right side of the drive's graphical representation in or out to shrink or expand its size. However, only three drives appear in the upper-graphical section. You can view all your drives in the text listing below — the text portion occupies at least five-sixths of the screen — but if you have more than three drives (we had six), it's a hassle.

Task icons can be found at the top of Easeus Partition Master 3.5 Professional Edition's application window, and the equivalent text descriptions of those tasks are shown along the left side of the screen. If you right-click on a partition or disk, you'll see a repetition of those same options.

Easeus Partition Master 3.5 Professional Edition offers the usual tools; you can create and delete partitions as well as resize them. Easeus doesn't support partition-editing functions that allow you to change a partition from, say, NTFS to Linux, but you can change a FAT partition to NTFS.

Easeus Partition Master 3.5 Professional Edition has also added disk and partition copy functions, but things can get odd. For example, copying a partition requires that unallocated space already exists. You can't just tell the application to use an existing partition and erase the data it might find there. This can make the task awkward and increases the number of steps needed to complete it.

The new version of Easeus Partition Master 3.5 Professional Edition has removed the previous need to restart the computer before beginning a copy of a non-system partition. That's a boon to people who dislike unnecessary reboots.

Easeus borrows Windows CHKDSK, if needed, when doing a surface analysis. If you want to defragment your disk, you'll need to resort to Windows' defragmenting tools.