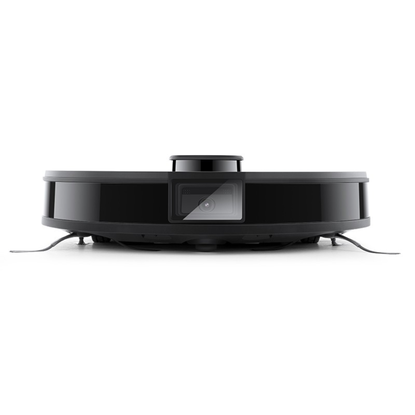 The Deebot T8 AIVI acquits itself well as a smarter kind of robot vacuum cleaner but it doesn’t make a tremendously compelling argument for why that’s better.

While Deebots aren’t quite as synonymous with robot vacuum cleaning as iRobot’s Roombas are, they’ve continued to operate as one the best alternatives in the meantime. And as time marches on and robot vacuum cleaners continue to get more and more advanced with each successive generation, Ecovacs are looking to build not just a better robot but a smarter one.

First introduced at IFA 2018, the AIVI tech found in the new Deebot T8 AIVI promises to be the catalyst for this shift in what everyday users should expect from their next robo-cleaner.

In reality, the new Deebot T8 AIVI might surprise you in little ways but otherwise performs to expectations. It succeeds at shifting expectations but stops short of redefining them. It’s cool to see tech utilised in this way but it doesn’t prove to be much of a game-changer.

The Deebot T8 AIVI is a smidge more minimalist than some of the other Ecovacs models but it doesn’t stray too far from the usual template. It’s a disc-shaped vacuum cleaner with a bunch of sensors hidden beneath a plastic visor running around the sides.

The Deebot T8 charges via a set of connectors squidged underneath the thing and there’s a detachable mopping accessory that comes bundled with the unit if you want to give your floors a quick once over.

Honestly, there’s not too much to say about the aesthetics of this thing. Like most of the Ecovacs roster, it looks pretty much how you expect. It crams a lot of user-facing and underlying tech into a fairly compact form-factor but the sum results of that effort don’t really look all that different to what’s come before.

When full, the top-most layer of the Deebot can be flipped open to access the dustbin inside. Likewise, the water reservoir located in the back half of the Deebot’s chassis can be accessed by popping it out of place. Thankfully, refilling this doesn’t involve too much mess or splash damage.

The charger accessory for the Deebot T8 AIVI is similarly barebones. You just plug it into a nearby power socket and leave it be.

It’s been something like two years since I last properly messed with one of Ecovacs’ Deebots but, for better and worse, the Deebot T8 AIVI made it feel like barely a day has passed.

A lot has happened since now and then but the fundamentals of what an Ecovacs robot vacuum cleaner is haven’t changed all that much. You take the Deebot out of its cardboard packaging. If desired, you stick the mop attachment on it. You stick on the wall charger for a bit and you’re more or less ready to go.

Even if you’re coming at it from something other than a tech & gadgets background, it feels straightforward and intuitive enough to be a treat.

While the hardware side of the process hasn’t changed all that much, the software side of things feels significantly smoother than I remember. When I reviewed the Deebot 900 Ozmo, I encountered some confusion here since some Ecovacs products used the Ecovacs app while others use the similarly-named Ecovacs Home app. This time around, no such issues occurred.

Once you’ve created and logged in using your Ecovacs account, you’re never more than two taps away from starting your next clean. As with previous models, you can also bypass the app by hitting the big glowing button on the top of the Deebot 8T.

At the time of writing, there are two in-app modes to choose from: you can either trigger a Smart Clean or you can take direct control of the Deebot using Video Manager.

The former sets the Deebot to full auto. It’ll map out the space around it and clean appropriately. As with previous models, a low battery will send the Deebot back to base to charge for a bit before finishing the job.

The other mode here allows you to take direct control of the deebot and see things through its eyes. In addition to chasing your pets around the house remotely, you can also use a speaker inside the unit to transmit your voice through the unit an

Overall, this feature is bogged down by latency but still possessed of more than just novelty. There’s a patrol mode you can enable if you want to set your robot vacuum as something of a sentry.

If you open the app mid-Smart Clean, you’ll get a real-time update of where the Deebot has been and what it sees. Aside from rooms where the doorsill couldn't be overcome or mirrors - which often left phantom rooms on the map - these floorplans were most accurate and generally pretty useful for keeping tabs on the Deebot while it’s on the clock.

At the conclusion of a clean, you’ll also reap the benefits of the new AI-based image recognition tech inside the Deebot T8 AIVI. Clutter like stray shoes, power cords and like will be marked on the floorplan of your house. The Ecovacs app will then prompt you to move those items before sending the Deebot on a second run specifically to deal with those problem areas.

Most of the time, I found this feature surprisingly accurate. However, equally as often, being able to detect an obstacle didn’t really help much. Sometimes, the Deebot would detect a power cable stopping its progress and then end up tangled in it anyway.

I noticed this happened more often in darker spaces. For example, underneath a bed. This suggests to me that while the image recognition here is decent in well-lit spaces, it’s harder to rely on when it comes to the nooks and crannies that you’ll often use to hide cables and the like.

Even if it’s better about identifying areas where it might struggle, the Deebot T8 AIVI doesn’t necessarily use that knowledge to its fullest potential. I would like to see some more nuanced controls around this in the future. It would be cool to imagine a version of this product where you give it the go-ahead to try and clean around stuff like shoes while also having it keep its distance from any and all things cabling-related.

In addition to the Deebot T8 itself being a little smarter this time around, the app is better about leveraging that data. The downside is that you’re getting a lot of notifications from this thing but the upshot is that they tend to be helpfully specific. There’s a little less “Hey, there’s been a problem. Go check on your robot” and a little more “Hey, the dust filter is nearly full. Might be a good idea to clean it”. These are small touches but they help make using a robot vacuum like this one feel a bit more engaging, involved and personal.

Switching on ‘Advanced Mode’ lets you get a little more nuanced like setting virtual boundaries for the unit and requesting specific areas be cleaned. If those are features you’re keen to make use of, you’re gonna want to enable it at the get-go.

Otherwise, you’ll have to waste a perfectly good clean on mapping out your residence. By default, the Deebot forgets your space’s layout after each clean.

While I was impressed by the degree to which the overall smart experience of relying on the Debbot 8T has advanced over the past few years, it didn’t feel like that much of a change and certainly not enough of a change to justify the jump upwards in price.

Being able to identify and avoid clutter doesn’t change the fact that Deebot T8 still can’t always deal with those obstacles. Still, by the metrics that count most, the Deebot T8 is a solid choice for robot vacuum cleaning. Reliable fundamentals are uplifted by a strong software experience.

The Deebot T8 AIVI doesn’t stumble but it doesn’t soar with the kind of augmentative grace that the name might lead you to expect. It’s a smarter kind of robot vacuum cleaner but it doesn’t make a tremendously compelling argument for why that’s better.