Epson's Stylus Photo 1410 is one of the cheapest A3+ capable photo printers available, but it still produces great photos. It uses dye-based inks, making it a suitable for glossy photos and presentation documents.

Epson's Stylus Photo 1410 A3+ photo printer won't feed roll paper like the Stylus Photo R2880, but it's cheaper and sits at a tempting price point for amateur photographers. Direct CD/DVD printing, brilliant output and dye-based consumables make this a viable choice for glossy photos and in-house production of marketing materials.

The Epson Stylus Photo 1410 takes up a considerable amount of desk space with input and output trays fully extended, but they can be retracted into the printer's body. The rear paper tray accepts a maximum paper thickness of 255gsm which is suitable for most conventional media, but not particularly heavy stock.

Offering USB 2.0 and PictBridge connections, the printer will connect to local PCs as well as compatible digital cameras and mobile phones. We would have liked a card reader as well, but most modern digital cameras support PictBridge anyway.

As with similarly equipped Epson and Canon models, the Stylus Photo 1410 allows you to print directly to CDs and DVDs through a pull-down feed slot and bundled pallet. The feed slot can only be lowered by first lifting the ink cartridge cover. Some printers have an annoying habit of recalibrating the print head every time this occurs, but that's not the case here.

Like Canon's entry-level A3 photo printer, the Pro9000 Mark II, the Epson Stylus Photo 1410 uses dye-based inks; the same you would expect to find in most sub-$1000 inkjet printers and multifunctions. While the pigment-based consumables used in more expensive printers like the Stylus Photo R2880 provide greater vibrancy, they don't tend to last as long or work as well with glossy media. Dye-based inks are typically cheaper, too; expect a running cost of 22.4c per A4 page.

We are usually willing to make concessions for photo printers when it comes to speed. However, for the Stylus Photo 1410 it seems none are necessary: the photo printer manages to keep up with A3+ inkjet printers designed for the office in both A4 and A3 speed tests. It even offers a scaling option within the print driver, which makes it easier to blow A4 documents up to A3 without sacrificing quality. 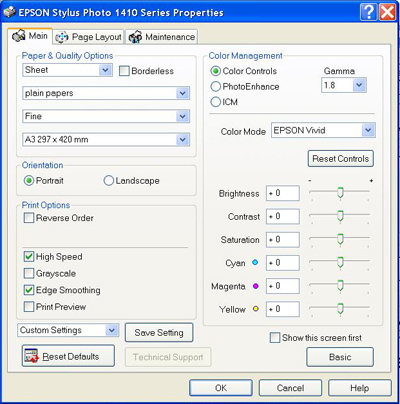 Documents are of an acceptable quality at both A4 and A3 sizes, though colours in graphical documents tend to look a little oversaturated. Though colours aren't neutral when printing photos, the slight oversaturation makes for spectacularly vibrant results in both full colour and monochrome prints. Those with a discerning eye may complain that blacks are in fact too dark in black and white photos, which has an impact on detail within photos. For glossy photos and marketing materials, the vibrancy and ability to manually alter colour through software.

For A3+ photos and in-house marketing materials, the Epson Stylus Photo 1410 does a good job considering its price tag. Amateur photographers will find plenty to like about this printer, though professionals best look elsewhere.