How to keep a tent, office space, living room or bedroom cool 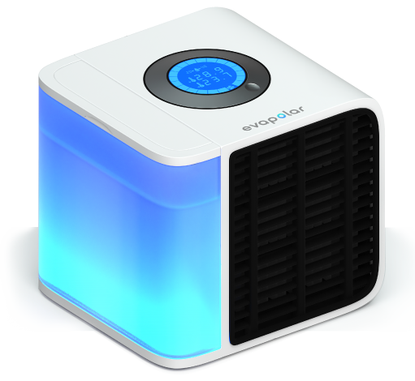 An ingenious little device which efficiently keeps you cool at home, in the office or in the bedroom. But in extremely hot and humid weather, effectiveness is limited.

Australians have a relationship with hot summers and air conditioning that few developed countries can appreciate. And yet it looks like it’s the Russians who have come up with an innovative solution to hot homes and offices and even tents when camping.

The Evapolar personal air conditioner is funky-looking 17cm cube which sits on your desk, coffee table or bed-side table pumping out cool, purified, humidified air. It comes with a regular USB cable and plug and we quickly had it up and running on an iPhone charger.

A cool-looking round, blue LCD on the top gives you an at-a-glance readout of fan speed, temperature and output temperature. A control ring around this easily lets you up the power or reduce it.

How do you keep a tent cool when camping?

It’s an evaporative cooler meaning that the coolness comes from evaporating water which is then blown at you with a small fan. While evaporative coolers are regularly referred to as air-coolers due to their weak performance and struggles with humidity, Evapolar states, "The common opinion is that small air coolers are absolutely inefficient in general and almost useless when humidity is more than 55%-60%. Actually, this is true for all of them except Evapolar. In Evapolar we utilize the most advanced cooling technology taking literally 100% of what laws of physics allows us." We can't test the percentages but it certainly performs better than much-larger evaporative coolers that we've used in the past. And you can't place those right by your head (when needed) easily.

Apparently, the technology it’s based upon uses, “Special evaporative nanomaterial, developed from a part of Russian Military tech.”

We reckon that makes it part MiG.

The official blurb says, “Within 2-3 minutes Evapolar cartridge absorbs a huge amount of water. The water then spreads evenly on the surface of the cooling pads. When the air goes through the pads, the water evaporates, which makes the air cool down while getting saturated with water.”

The cartridge needs replacing every 8-12 months but that’s only if you use it constantly in that time. A new one costs US$25.

Evapolar says it will affect an area of 3-4 metres2 around it and can cool things down by up to 150C. However, this will depend on humidity and environmental temperature and Evapolar has provided us with a chart showing what to expect:-

The whole project came about via an Indiegogo campaign and, as such, there’s an extensive story surrounding its development and that can be read here.

The noise of the fan isn’t particularly intrusive: it’s not high-pitched and whiny and more of a low drone. It’s quieter and less intrusive than Dysons and regular desk fans. It could be a wonder-fix for those who suffer in bed on hot summer nights.

Using our iPhone 7 with the Decibel 10th app we determined that our quiet office background noise was around 65 decibels (regular conversation loudness). At low power, we could feel the coolness but it was quieter than the quiet background drone of our office. It became a little more audible at mid-power with a 68-70dB reading but this resembled a quiet swoosh. At full power this would climb to around 72-75db which is noticeable but not intrusive.

The Quick Start guide is simple enough – take out the reservoir, fill it up, plug it in. The reservoir is also backlit and blue making the whole unit feel like a calming device.

Evapolar may also have answered the question, "How to keep a tent cool when camping?" Many campers who have struggled to sleep at night in hot tents or caravans will love the idea of having a highly-portable, low-powered air con unit that can be powered by power packs used for recharging phones. This could be a major market.

Of course, offices and homes with humidity issues won’t appreciate more humid air within them. Residents in the hotter and more-humid parts of Queensland, Northern Territory and WA won't be able to get much use out of it when they need it most.

But if a deskfan is blowing hot air at you and your office aircon isn’t helping much after getting out of the sun, this is potentially a great little device that just plain works (if there's not sauna levels of humidity) and costs a reasonable US$179. Shipping to Australia is $18.50.

We absolutely love it and it’s already one of our products of the year.