The Eye-Fi Pro X2 is designed with demanding users in mind. It's an 8GB, Class 6 card that can transfer RAW files in addition to JPEGs wirelessly from your camera. It even allows files to be shared online easily, or to be sent directly to mobile devices. It's definitely worth considering if you're an avid photographer.

Eye-Fi SD cards are memory cards that feature a tiny built-in wireless adapter, but you would never know this just by glancing at them. They look just like a standard SD card, but they make it possible for you to transfer your photos to a computer, or upload them to a photo sharing site, without having to remove the card from your camera. Eye-Fi SD cards have been available overseas for a while and have only recently become available in Australian stores. There are various flavours, but the one we've looked at is the professional model: the Eye-Fi Pro X2.

The Eye-Fi Pro X2 is a Class 6 SD card with an 8GB capacity and it houses the software that you need to configure its Wi-Fi settings and manage where your photos will be sent. You must plug it in to a computer to set it up before it can be used to wirelessly transfer images from your camera. You can use either the supplied SD card reader to plug it in to a desktop PC that doesn't have a built-in SD card reader, or you can use the built-in SD card reader on a laptop. If you have anti-virus software installed, it may pick up the autorun file on the SD card as being suspicious, mainly because autorun files generally aren't found on this type of medium. We had to manually launch the setup program from the SD card because the autorun never automatically ran on our systems.

Setting it up manually is easy though. There is a folder called 'start here', which is definitely where you should start. It contains the setup file for both Windows and Mac systems. This setup file downloads the latest version of the required software, which is called Eye-Fi Centre, and which was up to version 3.4 when we tested the card. For the software to work properly, it will need to be able to access the Internet, which means telling your firewall (if you have one running) that it's allowed to do so. 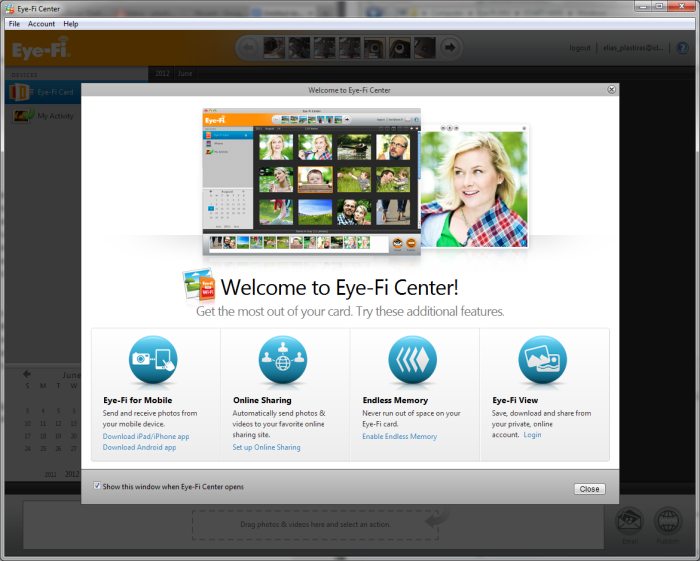 After Eye-Fi Centre is up and running, it will find your Eye-Fi SD card and you'll be able to create an Eye-Fi account (necessary for using the cloud storage feature) and then configure it with the details of your wireless network. Go to File-Settings-Eye-Fi card to find your wireless network and add it to the card. You can add multiple networks to the card if you want to use Eye-Fi to transfer images from multiple locations (while at home and in the office, for example) — up to 32 networks are supported. God help you if you need more!

The SD card's wireless signal strength was about a good as a typical notebook wireless adapter when it came to finding access points in our area. A direct connection mode is also available, which can be used when there is no wireless network to automatically transfer image files from the SD card to a mobile device, either an iOS or Android device (there are apps available). 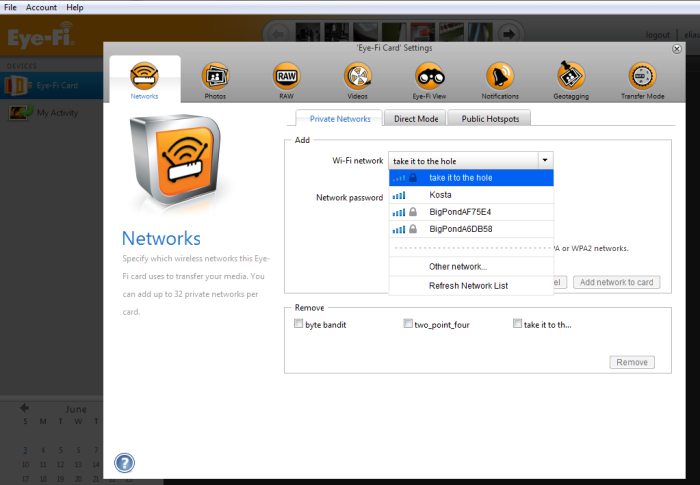 The settings of your wireless networks need to be saved to the card.

Once the network settings have been added to the card, it's then time to tell the card what to do with the photos that it will capture. You can tell it to upload photos to the computer on which you set up the Eye-Fi Centre software (you can only set one computer as the recipient), and you can make it so that photos are automatically uploaded to the Internet through Facebook, Flickr, Picasa and a bunch of other sites. Furthermore, you can have photos uploaded to the Eye-Fi View service, which holds them for seven days unless you end up buying a premium account (it costs $US49.99 per year). We used both Flickr and Eye-Fi View to upload photos and both sites received uploads almost at the same time. 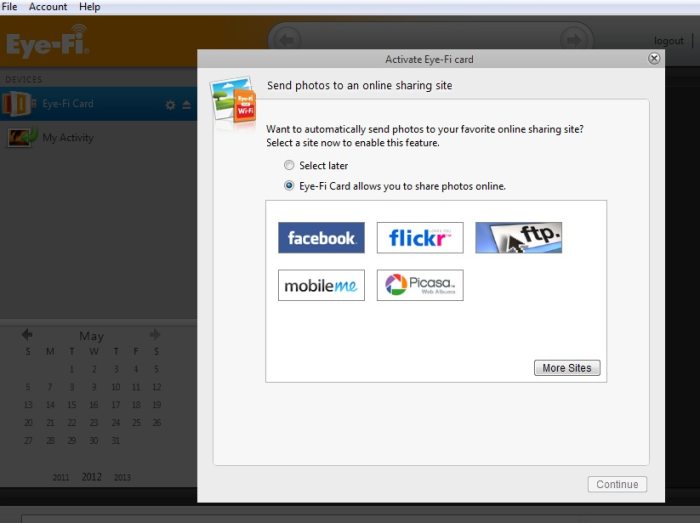 Photos can be shared online automatically.

By default, all photos and videos will be transferred as you take them, and email alerts will notify you when transfers have been completed. Videos can take a long time to transfer, so it's probably best to disable these from automatically uploading, unless they are only going to a computer on your local network.

In order for photos to be transferred, the SD card has to be accessible. This means that the camera in which the card sits has to be powered on and active, not in power saving mode. If photos aren't transferred in one hit, then the transfer will continue the next time the camera is active. The card works with compact cameras, interchangeable lens cameras and digital SLRs, but you'll want to consult the Eye-Fi Web site's [[xref:http://support.eye.fi/cameras|compatibility list to make sure your camera is supported before going out and buying one.

We used it on the Samsung NX200 without any issues (although we had to increase the time it took for the camera to go into power saving mode), and we also used it on a Nikon D80 digital SLR and a Canon EOS 60D digital SLR. For the 60D, we had to enter the menu settings and enable support for Eye-Fi.

The Canon EOS 60D has an Eye-Fi setting in its menu that must be enabled in order for the wireless SD card to work.

It even shows you the network settings

Transfers can take a very long time though, especially if you are uploading to multiple places at once. Furthermore, they'll be even longer if you shoot with a high megapixel camera, and shoot lots to boot! If you find that it takes too long to transfer your photos, then be a little more conservative in how many places you upload to — we found the going slow when we enabled uploads to Flickr, Eye-Fi View and our computer, but transfers were much faster when we just transferred to our computer and shunned the online services. When within 2m of our 802.11n router, it took about 4sec before a transfer was initiated to the computer, and less than 18sec for a 5MB file to be copied over.

You can enable the selective share and selective transfer features in the card's settings so that only the photos you select using your camera's 'protect' function will transfer, and this is great in situations where you have to take many photos in order to capture only a few keepers.

The Endless Memory feature can free up space on the SD card by deleting photos that have already been safely transferred to your computer or online service — you can configure when this should take place, from 10-90 per cent of the card's capacity.

In addition to automatically (and selectively) transferring photos, the Eye-Fi Pro X2 will also automatically geo-tag them for you. It was accurate down to about 200m in our tests. It also has the ability to transfer RAW files.

If you're the type of person who hates removing the SD card from your camera to transfer images, then the Eye-Fi is for you. It's also of benefit to those of you who want to upload photos from a digital SLR or other dedicated camera with a minimum of fuss, either through a wireless network or through your mobile device. It's definitely a great little product and we're glad that it can finally be purchased in Australian stores. It's distributed by CR Kennedy and available from many retailers across the country.