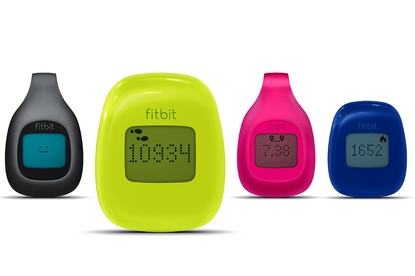 The FitBit Zip's tiny design, long-lasting battery and wireless synchronising capabilities make it a great "clip and forget" device that should keep you motivated. However, the non-backlit screen and the lack of an altimeter to count stairs climbed are downsides.

Earlier this year we reviewed the Fitbit Ultra, a wireless activity tracker or digital pedometer that counts your daily steps and logs the data in an easily presentable manner. Fitbit is now back with a smaller device that essentially does the same thing, with a few exceptions. The tiny Fitbit Zip remains a great motivational tool for a competitive price, though the lack of stair counting is a downside.

If you thought the Fitbit Ultra was small, you're in for a bit of a shock. The FitBit Zip is absolutely tiny. It's not much larger than a 20 cent piece and looks rather like a miniature Tamagotchi from the 90s (surely you remember those things?). The Zip itself is a smooth, gloss plastic shell, but it comes with a rubber holder with a clip on the back. Simply place the Zip in the rubber shell and clip it to your clothing. Our review unit was a black model, but the Zip is also available in white, pink, lime and royal blue colours.

The Fitbit Zip's tiny size means it's very easy to conceal under your clothing. It's so small and light that once we clipped it on every morning we forgot it was even there. The disadvantage to this is that its easily losable. While the belt clip itself seemed sturdy and never fell off our clothing, the tiny size of the unit means its very easy to misplace or lose when you do take it off. We lost two Fitbit Ultra units in the past, so had to be even more careful with the Zip.

The Fitbit Zip may be a cheaper unit than the Ultra but it does have a few significant design advantages. Firstly, it runs on a lithium watch battery so it doesn't need to be recharged. Fitbit says the battery should last between four and six months before needing replacing, and replacement watches are cheap and easily available. After more than three weeks of use everyday, the battery indicator on our review unit still showed full.

Secondly, the Zip has built-in Bluetooth connectivity so it can wirelessly sync to your computer with the included Bluetooth dongle or to an an iPhone 4S or iPhone 5 through the Fitbit app. Fitbit says the ability to sync with Android smartphones through the Android app is "coming soon", though the company has not specified when this will be available. We tested the Fitbit Zip with an iPhone 5 for a number of weeks and the ability to never have to plug the Fitbit into a computer to charge or sync is a fantastic feature.

The biggest disadvantage of the Fitbit Zip's design is its monochrome screen. Unlike the Fitbit Ultra, the screen doesn't have a backlight, so its impossible to see in the dark. We also found the screen hard to quickly glance at when we were walking.

The Fitbit Zip also lacks a few other features. It can't monitor your sleep, nor does it count stairs climbed. We didn't really miss the sleep monitor feature as we found it wasn't overly reliable on the Ultra model, but the lack of step counting is a downside.

The FitBit Zip is very simple to operate. There's no buttons on the unit so you simply tap the resistive display to cycle through the modes. Tapping the screen will display how many steps you've taken, how many kilometers you've walked, how many calories you've burned and the current time. As it's a resistive display, you need to tap rather hard on the screen and we often found that our taps weren't always responsive.

The Zip also shows a "recent activity level" in the form of a digital smiley face. If the face isn't smiling, you've been inactive recently. We found this rather useless and often couldn't tell the difference between the faces, though you can turn it off in the settings menu if you wish.

Like the Fitbit Ultra, the Zip really comes into its own when its synchronised with the FitBit.com Web site. Wireless syncronising to our computer worked relatively well during our testing and the device can be used with either a PC or a Mac.

If you have an iPhone 4S or iPhone 5, you can also set the Zip to sync periodically in the background using the Fitbit app. However, we found this a hit and miss affair. Sometimes our Zip would sync in the background and other times we needed to open the app and hit sync for the results to be logged.

Once you've registered for a free account the FitBit.com service tracks your data, calculates your daily results and displays them on multiple graphs and tables. You'll need to enter a fair bit of manual information when you first set up the FitBit: log your age, sex, height and weight and you're ready to go. Armed with your daily FitBit data, the service allows you to set personal goals, for example how many steps you want to strive for each day, or how many calories you want to burn. You earn badges for achieving these goals and can set them using the iOS and Android apps, too.

The FitBit service calculates and displays your daily activity breakdown, showing how long you've been sedentary, lightly active, fairly active or very active. Checking your results and setting new goals quickly becomes an addiction, helped along by a simple and straightforward user interface.

In addition to its step and calorie counting features, the FitBit Zip once again allows you to log your food intake and any physical activities you do, such as running or playing sport. Both the food log and the activity log are good ideas in theory but require a great deal of manual input to get the most out of. Despite a recent Australian launch, most of the foods in the FitBit database are American brands. You can add your own food entries but it's not really worth the time or effort.

The Fitbit Zip is available through Harvey Norman and other selected retail stores across Australia for $69.95.