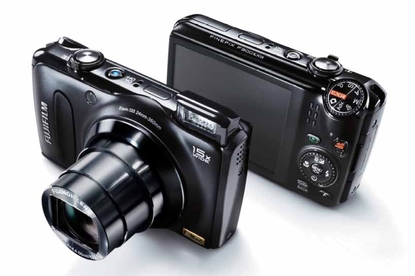 The Fujifilm FinePix F300EXR is certainly one of the most versatile fixed-lens cameras on the market today, thanks to a 15X optical zoom lens (24mm to 360mm), some unique shooting modes that make the most of the unit's 12-megapixel Super CCD EXR sensor, and a one-touch panorama mode that lets you sweep the camera to create an instant 360-degree image.

But despite all that versatility, the F300EXR has a few performance issues that hold it back from claiming one of the top spots in our top-rated pocket megazoom chart: subpar video quality, disappointing low-light shots, shutter lag, and sometimes-delayed autofocus.

Let's start with a list of things the FinePix F300EXR does right, because it definitely brings a lot to the table for prospective buyers. In addition to full manual controls, aperture- and shutter-priority modes, two Auto modes, and a range of scene modes, you get some unique controls. The camera's EXR options let you tweak the camera's sensor optimisation with three specialised shooting modes: resolution priority, high-ISO/low-noise, and dynamic-range priority.

Of the three, the dynamic-range priority mode is the most exciting: The camera lets you adjust the dynamic range parameters of a shot from 100 percent to 800 percent, though the results at the highest dynamic range setting lack sharpness. Test images shot at a dynamic range level of 100 percent showed sharper edges and higher contrast between objects in shadowy areas than did test shots taken at 800 percent.

Unfortunately, the high-ISO/low-noise EXR mode doesn't work as well as advertised, as pictures look just as noisy as high-ISO shots taken with other cameras. The mode combines pixels on the camera's sensor when shooting at higher ISO levels in an attempt to reduce the image noise that smaller-sensored point-and-shoot cameras often produce. However, test shots taken in very dark conditions with this mode showed quite a bit of noise at ISO 800 and ISO 1600, and the higher ISO levels didn't brighten up the scene much, either.

Another dedicated low-light mode in the mix is one of three special modes tucked in the camera's Advanced mode menu. Pro Low-Light mode uses four-shot exposure bracketing to stack low-light images and bring out detail. Unfortunately, the results looked dark and murky. The bottom line: Despite the camera's otherwise-versatile Super CCD sensor, using the camera in low-light settings was a testament to the superiority of backside-illuminated CMOS sensors for shooting in dark environments. The FinePix F300EXR isn't a great camera for low-light shots unless you use its flash.

On a brighter note, the other two Advanced modes performed much better than the camera's Pro Low-Light setting. The F300EXR's Motion Panorama 360 feature is similar to Sony's Sweep Panorama mode: it lets you hit the shutter button once, pan across a scene, and get the photographic equivalent of surround sound. It worked well in my tests, though I did notice a bit more distortion in the resulting image than I saw in test panoramas snapped with Sony's similar mode.

Pro Focus mode, the third mode found in the Advanced menu, stacks two rapid-fire images to mimic the shallow depth-of-field and sharp foreground/blurred background effect you get when shooting with a wide-open aperture. That mode also lets you adjust the "softness" of the background on a three-step scale. Pro Focus worked well, as long as I stayed at least a foot or so away from the subject--when I got too close, a warning message appeared on the screen.

The camera's macro mode lets you move in much closer to your subject. It's accessible by pressing the left side of the directional pad. In response, the camera locks its focus on extremely close subjects and creates a shallow depth of field, but the images aren't the sharpest when viewed at full size.

Another positive feature of the FinePix F300EXR is its above-average burst mode, which snaps up to 4.5 shots per second at a reduced 3-megapixel resolution (and 1.5 shots per second at full 12-megapixel resolution). Unfortunately, the camera has an annoying shutter lag outside of that continuous shooting mode, both at startup and when you're waiting for the camera to autofocus.

The camera's 15X optical zoom lens is practically rocket-powered, zooming from its wide-angle limit to its telephoto extreme in about a second. In fact, the zoom lens is so fast that the camera's autofocus has a hard time keeping up, searching for the better part of a second before finally locking focus. The laggy autofocus was especially evident when I shot video with the FinePix F300EXR; I found that I could use the full extent of the camera's 15X optical zoom lens while filming, but the autofocus struggled at certain points as I zoomed.

A few frustrating limitations in manual mode cause the F300EXR to fall short of being a pocketable weapon for experienced photographers. Aperture settings range from F3.5 to F10 on the wide-angle end of the zoom and from F5.3 to F16 on the telephoto end, but you get only three F-stops per focal length. Also, the camera doesn't shoot RAW-format images--something to think about if you're a heavy-duty photo editor.

On the Auto mode side of things, options abound. You have your choice of two Auto modes: a standard Auto mode that optimises in-camera settings like most other camera on the market, and an EXR Auto mode that chooses between the resolution priority, high-ISO/low-noise, and dynamic-range priority modes.

That's a lot of options, even though some of the modes (the low-light modes, the full manual options, and the lack of a dramatic difference between the dynamic-range settings, in particular) are less effective than the corresponding modes on competing cameras. Despite the many options, the button layout is well spaced, the mode-dial selections are clear, and the camera's menus are well-organised.

Using this camera on a tripod in well-lit situations delivers good results.

In PCWorld Labs' subjective testing for image and video quality, the Fujifilm FinePix F300EXR collected marks of Very Good for both color accuracy and lack of distortion; the lack of barrel distortion is especially impressive for a camera with a very wide-angle lens, as the F300EXR even outscored advanced cameras such as the Canon PowerShot S95 and the Panasonic Lumix DMC-LX5 in that scoring category.

Exposure quality earned a rating of Good, but sharpness is a weak spot for the FinePix F300EXR; the camera received a sharpness rating of Fair, trailing nearly every point-and-shoot camera we've tested this year in that category.

Battery life is decent but hardly superb, according to the camera's official CIPA rating. The FinePix F300EXR snaps an average of 250 shots per charge of its lithium ion battery, enough for a battery life score of Good.

In the realm of video, the FinePix F300EXR turned in particularly disappointing results. Test clips shot in bright light and in low light were rated as Poor, though audio pickup from its on-board mono microphone earned a rating of Good.

Below are the sample clips from the PCWorld Labs' subjective video-quality tests, shot at 720p in AVI format at 24 frames per second in bright light and in low light. Select 720p from the drop-down menu in the lower-right corner of each video player for the highest-quality footage.

At just 1.3 inches deep, the FinePix F300EXR is impressively compact for a 15X optical zoom camera, but it's still a bit bulkier than a typical point-and-shoot camera. It has a very crisp and sharp 3-inch-diagonal LCD screen, which is about as easy to view in direct sunlight as any I've ever used on a point-and-shoot camera. The excellent LCD screen is your only viewfinder, however, because the camera lacks an optical viewfinder. A nice raised, textured grip favours right-handers, and the mode dial seems a bit more accessible than the usual setup, thanks to a 45-degree slant that lets you adjust the dial from any angle. The mode dial offers eight options: manual mode, aperture priority, shutter priority, program auto mode, auto mode, scene selection, Advanced mode selection, and EXR mode selection. Though everything is easy to find, Fujifilm might have done better to combine the Advanced mode selections with the scene mode selections on the dial, just to reduce the amount of dial-twisting necessary to access some of the modes.

Due to the slanted mode dial mounted on the top edge, the top of the camera is clean, with just a power switch and the shutter button/zoom control ring. The back of the camera is easy to navigate, with just a navigation pad/scroll wheel and four buttons: the playback button, a dedicated video button, a display button, and an F-mode button for quick access to ISO settings, image-size settings, and film-like image filters. The four-way directional pad doubles as a means of one-touch access to macro mode, the self-timer, flash controls, and exposure compensation.

One annoyance (but not a dealbreaker) is the camera's pop-up flash, which stays up as long as the camera is powered on. You can't click it closed with your finger, and powering it off via the camera's controls doesn't make it retract into the camera body.

The Fujifilm FinePix F300EXR is a glass-half-empty/glass-half-full pocket megazoom. There's a lot to like, especially for people who love to tinker with settings, as it has more shooting modes than the average camera. That helps make it versatile beyond its 15X optical zoom lens.

But a few key shortcomings prevent it from reaching its full potential, and some of the camera's more enticing modes don't work as well as I had hoped. You can find better cameras for full manual controls, for overall image quality, or for video quality if one of those criteria is especially important to you. The FinePix F300EXR ultimately falls into the realm of "jack of all trades, master of none."