A 10-megapixel Fujifilm digital camera with some serious design flaws 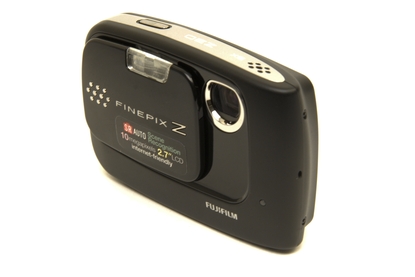 The Fujifilm Finepix Z30 is a cute compact camera let down by its inflated price tag and terrible user interface. There are plenty of better options on the market, some of which are decidedly cheaper.

The Fujifilm Finepix Z30 is an entry-level compact camera equipped with a 3x optical zoom lens and 10-megapixel CCD sensor. Its primary selling point is probably its affordable price tag – which is unfortunate, as there are plenty of cheaper, better options on the market. It is trumped in most areas by the Pentax Optio Z10 (RRP: $249): a rival compact camera with a 7x optical zoom lens. In fact, even the budget-level Samsung ES15 manages to give it a run for its money, despite costing half the price.

Instead of beating around the bush, we’ll just come out and say it: the Fujifilm Finepix Z30 isn’t a great camera. Picture quality was average and its feature set is basic, with the exception of a few unusual gimmicks. But by far its biggest blunder is the shoddy user interface – it’s absolutely awful. On the plus side, the Z30 is a supremely portable unit with a unique and eye-catching design. It also comes with some interesting shooting modes and produces vibrant colours. Despite these saving graces, we find it difficult to recommend the Fujifilm Finepix Z30. Compared to other $300 cameras, it remains a mediocre offering.

In place of a traditional power button, the Fujifilm Finepix Z30 uses a protective lens slider that switches the camera on when opened. We’ve seen similar mechanisms on cameras like the Sony Cybershot T700, and it’s a trend we wish more vendors would embrace. Sliding the camera open feels a lot more intuitive than searching for a power button and it also keeps the lens better protected.

The Fujifilm Finepix Z30 is an unusual looking camera – and we mean that in a good way. With its tiny 90.5x59x25.7mm dimensions and curvy metallic body, it looks like nothing else on the market. With the exception of its wonky rubberised buttons (which we’ll get to in a moment), the Z30’s build quality is pretty top-notch. Unlike many sub-$300 cameras, it has a good, solid feel to it.

The Finepix Z30 comes in a range of five colours: pink, purple, silver, gold and black. We tested the black version which we found to be pleasantly attractive. That said, the front slider and 2.7in display are notorious fingerprint magnets, so you may need to keep a handkerchief handy. All up, we were very pleased with the Finepix Z30’s appearance. Anyone who likes cute cameras will instantly want to adopt it. …And yet, as Scooby Doo’s bratty nephew has shown, a cute exterior often hides something ugly beneath.

Without a shadow of a doubt, the Fujifilm Finepix Z30 has one of the worst user interfaces we’ve ever encountered. From the cluttered menu layout to the tiny, unresponsive buttons, every facet of the control scheme feels broken. You don’t even get a directional pad, but instead have to use the macro, delete, flash, and self-timer buttons. As you can imagine, this makes navigation a nightmare; with the complicated menu adding insult to injury. It’s almost as if the designers went through a checklist of ‘Don’ts’ and then accidentally added them all to the camera. Hell, even the menu background is ugly.

The Fujifilm Finepix Z30 comes with the typical range of entry-level features, including face detection, scene recognition, adjustable white balance, continuous shot and 20 scene modes. Samsung has made some interesting additions to the usual scene selections, including a useful Internet Auction Mode. This lets you combine up to four VGA-sized photos in a montage arrangement for bite-sized eBay uploads (the front, back and sides of a camcorder, for instance). Otherwise, the modes on offer are pretty meagre, especially when it comes to manual features: all you get is adjustable exposure and ISO sensitivity to 1600.

When it came to taking pictures, the Fujifilm Finepix Z30 gave a pretty average performance. Images were a little on the soft side, especially at the edges of the frame. Noise was also an issue, with noticeable detail loss at ISO 400 and above. Thankfully, the Z30 acquitted itself well when it came to colour reproduction. When used in optimum conditions, our photos had a nice ‘pop’ to them which is sure to go down well on Facebook. Of course, the same thing can be said of any number of compact cameras, many of which are cheaper.