Fujifilm's JZ500 is pocket-friendly but doesn't have the features or the performance to match higher-priced competitors. 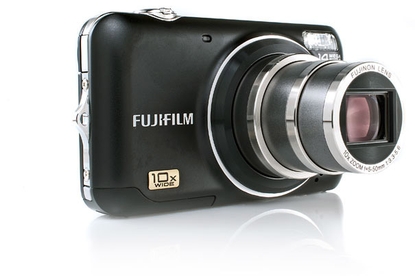 More pocket-friendly than other compact megazooms, Fujifilm's FinePix JZ500 doesn't have the features or the performance to match higher-priced competitors.

The Fujifilm FinePix JZ500 is an extremely pocketable pocket megazoom digital camera, thanks to a curvy 1-inch-deep body that's significantly slimmer than any of the other cameras we reviewed.

In PCWorld Labs subjective evaluations for image and video quality, the JZ500 turned in a disappointing score of Fair. Our jury noted that sample images taken with the FinePix JZ500 were murky and soft, posting well-below-average scores for both exposure quality and sharpness.

The JZ500 doesn't make up for its imaging shortcomings with battery life, either. The camera has a rating of 230 shots for each charge of its lithium ion battery, which is well short of some of the more feature-loaded cameras in our latest test group.

Video performance was at the bottom of the pack, especially in our low-light tests--and that tells only half the story when it comes to shooting video with this camera. Due to the JZ500's noisy zoom-lens motors and laggy autofocus, taking 720p clips with this camera is often a study in frustration.

Here are sample clips that we shot in bright indoor lighting and in low light with the FinePix JZ500. For the highest-quality clips, select 720p from the drop-down menu in the lower-right corner of each player.

The JZ500 lacks manual shutter and aperture controls; you're limited to the camera's scene modes, program mode (which lets you adjust ISO, white balance, autofocus, and other basic settings), auto mode, and automated scene-selecting mode. It's certainly easy to use, but it lacks the polish and image quality of the similarly robot-like Nikon Coolpix S8000.

The most interesting aspect of the FinePix JZ500 is its pet-detection scene mode, which is a face-detection mode for dogs and cats. You can set the camera to snap a photo automatically as soon as your pet turns toward the camera, although our hands-on tests revealed that the shutter isn't quick enough to capture particularly fast-moving dogs or cats. If you opt to snap the shutter button manually, it does take a fine pet photo.

The JZ500 is an also-ran among the big players in the pocket megazoom class, but it has a bigger, more-powerful sibling. For Fujifilm fans pining for a pocket megazoom, we suggest holding out for the FinePix F80EXR, which boasts the company's higher-end EXR sensor along with a 10X-optical-zoom lens.