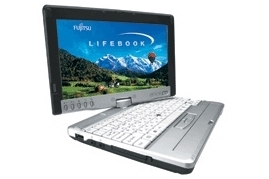 An ultralight tablet PC that is a little weak on character recognition, and too high on price.

The Fujitsu Pinion is a lightweight tablet weighing a slight 1kg. With a footprint of 21x15x3cm, it is extremely portable, although it does look a little bit chunky. The screen can swivel 180 degrees and be used as a tablet in a vertical or horizontal configuration. However, when it is being used in tablet mode, you are relying on Fujitsu's own tablet software rather than Microsoft's Windows tablet software, which unfortunately is not integrated as well as it could be.

The optical character recognition (OCR) could be better. The software as mentioned above is Fujitsu's although it does allow you to scribble comments on Word documents that are viewable on other computers. Even though the handwriting recognition was weak, there is an onscreen keyboard and a real keyboard that takes up the full width of the notebook.

In case of theft or loss - the security of your data is paramount - Fujitsu has embedded a finger scanner in the side of the monitor. This allows for a single sign on, even when in tablet mode, and it can also be used to access encrypted files.

It is an average performer for its size, posting 4242 in 3DMark 2005SE, and 78 in PC WorldBench 5. The battery life was mediocre, running for 110 minutes in the worst-case scenario. The major drawback is that it has no optical drive; essentially, this cripples the Pinion, meaning you are relying on USB 2.0, or the CompactFlash slot