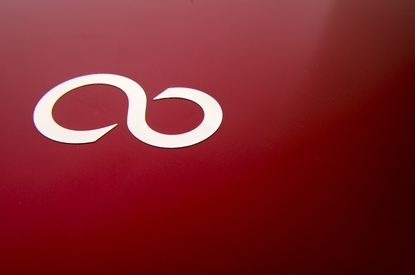 The Fujitsu LifeBook SH530 is a good 13in, Intel Core i5-based notebook overall -- but a less glossy design, a better keyboard layout and 4GB of RAM would make it a great notebook. We like the portability of the SH530, as well as the way it looks, and it has enough CPU power for tough multimedia tasks in addition to everyday office tasks.

The Fujitsu LifeBook SH530 is a flashy looking notebook that's perfect for users who want to stand out from the crowd. It's a 13.3in laptop that weighs a shade over 2kg and it ships with plenty of features around its edges and lots of grunt under its hood. Indeed, it has ample power for video encoding, editing music and manipulating photos. However, it's not perfect. In particular, its keyboard layout could be better and it wouldn't hurt for the keys to offer less resistance, the glossiness of the screen and palm rest sometimes gets on your nerves, and it ships with less RAM than the competition.

Check out our round-up of the best 2010 Fujitsu notebooks, including the great LifeBook TH700 tablet PC.

While it looks good, the glossy screen of the LifeBook SH530 can be distracting when you use the notebook outdoors or in a well-lit room; even with the brightness all the way up and while using it in a shaded area, you won't escape seeing your reflection in the screen. Overall though, the 13.3in screen is quite bright, has good contrast and its viewing angles are decent. It has a native resolution of 1366x768.

The palm rest is smooth and shiny rather than textured and dull, and it can become a little sweaty and sticky if you use the notebook for long periods of typing. The touchpad is responsive, but it only supports a single two-finger gesture — pinch zooming. You can rotate photos with a chiralmotion gesture — moving your finger from one corner of the pad to another in an anti-clockwise direction — and you can scroll through a page by sliding your finger along the right side of the touchpad.

The keyboard is spill-resistant (a tray under the keyboard captures spilt liquid) and has full-sized keys (except for the function keys and a cluster of keys on the right side of the keyboard), but they offer a little too much resistance; if you don't hit them hard enough you'll end up giving the spell checker a great workout. We don't like the position of the Home, End, Pause and Page Up and Down keys, which are to the right of the Delete, Backspace and Enter keys. It takes a while to get used to these and the first few times we used the LifeBook SH530, we frequently ended up hitting the Home button instead of Backspace and the Page Down button instead of Enter.

Along the sides of the LifeBook SH530 you'll find a built-in DVD burner, three USB 2.0 ports, eSATA (shared with a USB 2.0 port), HDMI, VGA, Gigabit Ethernet, headphone and microphone ports, an SD card slot and even an ExpressCard/34 slot. You also get 802.11n Wi-Fi, Bluetooth and a webcam. All up, it's a very well-stocked 13.3in notebook and the addition of the ExpressCard slot means it's also upgradeable — you could install a digital TV tuner or a 3G data card without having a dongle sticking out of a USB port.

The SH530 ships with an Intel Core i5-460M CPU, which runs at 2.53GHz but performed a little sluggishly in most of our tests. In the Blender 3D rendering and iTunes MP3 encoding tests, it took 55sec and 1min 15sec, respectively. Compared to a notebook with a 2.4GHz Core i5-450M CPU (such as the Samsung R590-JS02AU or the MSI FX600), the Fujitsu ended up being 1sec slower in the Blender test and 14sec slower in the iTunes test. In our Xvid video encoding test, in which we use AutoGordianKnot to turn a DVD file into a 1.5GB Xvid file, the Fujitsu took 1hr 17min, which is 11min slower than the Samsung and MSI notebooks.

The Fujitsu only ships with 2GB of DDR3 RAM, which is 2GB less than we expected for a notebook in this class, and its 5400rpm, 500GB hard drive (a Hitachi Travelstar 5K500.B HTS545050B9A300) was slow in our transfer tests. This drive averaged only 20 megabytes per second in our file transfer tests, which is a speed we're more accustomed to seeing in a netbook, rather than a bona fide notebook. 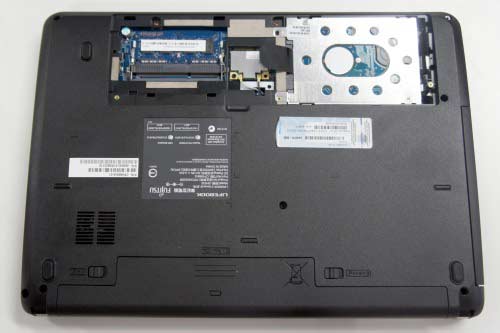 Nevertheless, the relatively slow performance did not hamper the notebook's responsiveness in everyday tasks and we enjoyed using it. You'll even be able to do some video encoding and other tough tasks — unless you're used to using a super-high-end notebook, the extra few minutes it takes to finish a task shouldn't be a worry.

The graphics card in the Fujitsu LifeBook SH530 is also quite good for a little laptop. It ships with an ATI Mobility Radeon HD 5430, which recorded a score of 3455 in 3DMark06. It's a little less powerful than other 13.3in notebooks such as Samsung's Q330-JS03AU and Toshiba's Satellite Pro U500, but it's adequate for running a variety of recent games at low-to-mid level graphics detail; it shouldn't be considered a gaming notebook, however.

In our battery test, in which we disable power management, enable Wi-Fi, maximise the screen brightness and loop an Xvid-encoded video, the SH530's 48 Watt-hour battery lasted 2hr 25min. It's a shorter time than we were expecting — the Samsung Q330 recorded 2hr 51min, for example — but it will last close to three hours if you just use it for Web browsing and writing documents. Furthermore, you can prolong the life away from an outlet by employing a power management plan and enabling Eco mode. Eco mode dulls the screen and switches off components that aren't needed by the notebook when it's running on battery power, such as the Ethernet port, and it also mutes the volume.

Despite sluggish performance, an overly glossy finish and some annoying key placements, the LifeBook SH530 is still a nice little 13.3in laptop that will please most users. It has plenty of built-in features, it is very portable and it's solidly built. We just wish it shipped with 4GB of RAM for the price, had less gloss and a better keyboard layout.