A highly mobile 13.3in Fujitsu notebook with a Core i7 CPU and USB 3.0 A lot of power lies within the small chassis of the Fujitsu LifeBook SH760, making it the perfect notebook for anyone who wants a highly mobile laptop with good speed and plenty of features.

Fujitsu's LifeBook SH760 may not look like a powerhouse notebook, but inside its tiny frame are a high-end Intel Core i7 CPU, a USB 3.0 controller chip, a decent NVIDIA GeForce 310M graphics card and 4GB of DDR3 RAM. Despite the formidable specs, it has a 13.3in screen and it weighs a slight 1.6kg.

Its light weight makes the Fujitsu LifeBook SH760 a very portable machine that's absolutely perfect if you want notebook with desktop replacement–like performance and features that can comfortably be taken on the road with you. A DVD burner is installed, but this can be replaced with an optional space saver to give the notebook a sub-1.6kg weight.

The Fujitsu LifeBook SH760 has a bright 13.3in screen with a native resolution of 1366x768. It's a glossy display and reflections from lights can be a problem if you are not viewing it from an optimal angle. While we like the contrast and brightness of the screen, it has a grid pattern that becomes noticeable when there's a lot of white on the screen. This can be distracting when you are trying to edit a photo, for example.

The screen's lid is also glossy and has a latch that secures it to the base of the notebook when it's closed. It's very light and it gives the notebook good balance; you can open with screen with one hand without the base lifting off the table. The screen's lid flexes quite a bit, but the LCD panel itself doesn't puddle as much as one would expect. 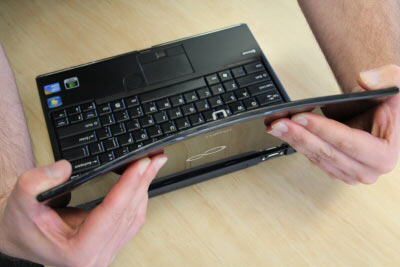 As you can see, the lid flexes a fair bit, but the screen is protected well and only slight puddling was noticeable. Oh, and don't try that at home.

The base of the Fujitsu LifeBook SH760 is made from magnesium alloy and it feels very light, yet solid. It has a DVD burner installed, as well as an ExpressCard/54 expansion slot, an SD slot and plenty of connectivity. The notebook has two USB 2.0 ports and one USB 3.0 port, HDMI, VGA, Gigabit Ethernet and even a 56Kbps modem. On the inside it has Bluetooth and 802.11n Wi-Fi (dual-band). You also get a webcam, a fingerprint reader, headphone and microphone jacks, and stereo speakers.

This is a packed notebook that's aimed primarily at users who need to be productive and not just surf the Web all day. Content creators will especially like the fast Core i7-620M CPU, which is a quad-core processor that runs at 2.67GHz. It recorded 50sec in the Blender 3D rendering test and 52sec in the iTunes MP3 encoding test, which is about 14sec and 10sec slower than what a Core i5-based desktop can achieve in the same tests. In WorldBench 6, which tests the system's overall ability to run everyday office applications as well as image and video editing applications, it registered a tame score of 103. This isn't a flashy score when compared to the Core i5-based ASUS N61J notebook, for example, but don't let that fool you: the SH760 beat the N61J in the Blender and iTunes tests by 9sec and 11sec, respectively. 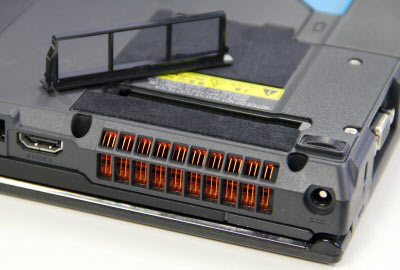 A fast CPU and a dedicated graphics card requires a good cooling solution. The SH760 has a large vent on the left side, along with a lint catcher that allows you to remove any accumulated airborne particles.

When using the notebook for everyday tasks it feels very responsive and quick to launch tasks. It handles multitasking with ease — and so it should, as it has four cores — and it will also perform well when running demanding tasks like video encoding. We were able to encode a ripped DVD to the Xvid format in 1hr 5min, reducing its size from 4GB to 1GB. The CPU features Intel's Turbo Boost function, which means it can run faster than 2.67GHz when a high workload is detected. During our tests the CPU reached a maximum speed of 3.325GHz.

We found the hard drive a little slow considering the fast CPU; it recorded a transfer rate of 26.83 megabytes per second, which is identical to the Samsung R580, but slightly slower than the ASUS N61J. The hard drive has plenty of space (500GB), but it's a 5400rpm model. We'd like a 7200rpm disk in a high-end notebook such as this one.

The NVIDIA GeForce 310M graphics adapter returned a relatively low score of 3799 in 3DMark06, which means it won't be able to run many games at all unless they are old titles or board games. However, the SH760 isn't designed for gaming, and the discrete graphics chip helps the overall system performance by offloading some tasks from the CPU and system memory.

One of the best features of the SH760 is its USB 3.0 port. You might not have an external hard drive that can take advantage of its extra speed just yet, but it's worth investing in one if you rely heavily on USB storage. The difference between USB 2.0 transfer and USB 3.0 transfers was about 44 megabytes per second in our tests. We were able to copy 4GB of data to a Western Digital My Book 3.0 at a rate of 66MBps while it was attached to the USB 3.0 port, but the same transfer recorded a rate of 20MBps when attached to the boring old USB 2.0 port. 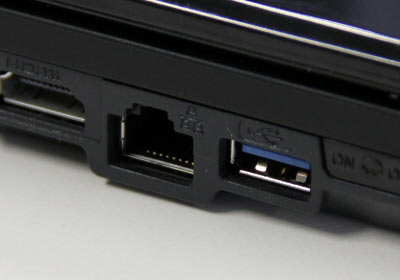 You can differentiate the USB 3.0 port from the others as it is blue.

Another cool feature is Anytime USB Charge, which is like Toshiba's Sleep-and-Charge USB ports (except it won't charge an iPhone). When you enable this feature, you will be able to charge USB devices even when the notebook is powered down and unplugged. Unlike Toshiba's implementation, there are no modes or settings to mess around with, you just tell the program how it should work — when the AC adapter is plugged in only, or when it's running strictly on the battery as well. It detected our Creative Zen MP3 player and was able to charge it even when the notebook was not plugged in to an outlet. 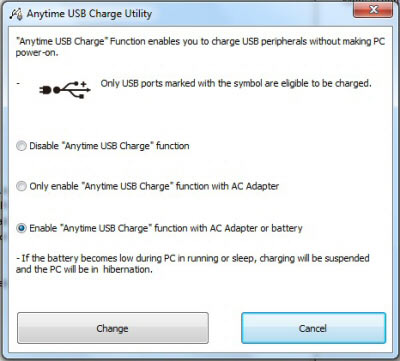 You can enable Anytime USB Charge from the BIOS or within Windows.

In our battery rundown test — in which we disable power management, enable Wi-Fi, maximise brightness and loop an Xvid-encoded video — the SH760 lasted 2hr 25min. This is a decent time, especially for a notebook with a CPU as powerful as the Core i7. More life can be extracted by using the notebook's 'eco' mode in conjunction with the power saving power profile. Eco mode lowers the screen brightness, disables the optical drive and LAN port, and mutes the volume. How much more life you can get when using these power-saving facilities will depend on the type of work you are doing.

This mode can be enabled by pressing the ECO button that resides on the panel just above the keyboard. There are four other shortcut keys that can be used to launch the Fujitsu Support Centre, your Web browser, an e-mail client and the webcam application (CyberLink's YouCam). They are useful buttons, and you can customise them so that other programs open up instead of the default ones.

Using the LifeBook SH760 is a joy thanks due to the implementation of a dual touchpad system. Instead of using the main touchpad for scrolling functions, you can use the circular scrollpad. You can alter its sensitivity in the Control Panel, and once it's set up to your liking you can move your finger in a circular motion to scroll long documents and also to zoom in or out of photos. On rare occasions it can get in the way while you type, and you might find yourself scrolling when you didn't intend to. Nevertheless, we like the idea of a dedicated scrolling device and used it a lot during our evaluation. 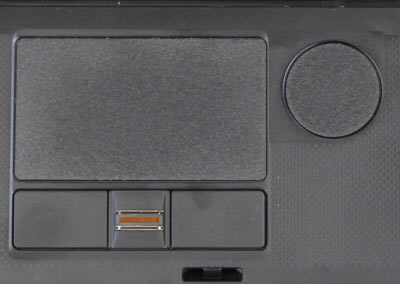 The SH760 features a dedicated circular touchpad for scrolling.

The touchpad also supports multitouch gestures, so you can enable pinching and flicking among, for example. It is a fairly small touchpad (6.6x3.8cm), but it works very well. There is a fingerprint reader in between the left and right-click buttons that you can use in conjunction with OmniPass software to manage logins to the system, programs and Web sites, as well as encrypt files and folders. There is no TPM installed.

We also love the palm rest and the keyboard of the notebook. The palm rest is not glossy (and therefore slippery) but instead has a matte, textured design that feels good to the touch. The spill-resistant keyboard has full sized keys (18.5mm) and only the delete key is in an awkward position one spot in from the corner. The keys possess good travel and none of them are undersized.

There's plenty to like about the Fujitsu LifeBook SH760: from its fast CPU and large hard drive to its USB 3.0 port and dual touchpad device. It's light, strong, looks good and has a great array of features. We recommend it to anyone who wants plenty of power in a small and highly mobile package. The only drawbacks are the lack of integrated 3G, and the inclusion of a 5400rpm hard drive rather than 7200rpm model.