A 13.3in laptop that's thin and light, yet equipped with a DVD burner and a full-voltage Intel Core i5 CPU The SH771 is worth checking out if you're looking for something with more features than an Ultrabook, but with a similar form factor. It's well built and looks good and it doesn't make many compromises when it comes to connectivity and specifications. However, it could use a better touchpad, a matte screen and a keyboard backlight.

Fujitsu's LifeBook SH771 is a 13.3in laptop that's designed for professionals who want something attractive, fully featured and powerful. It's almost as thin and light as an Ultrabook, but it contains a full-voltage Intel Core processor, as well as a built-in optical drive and many other connectivity features. It's a unit that's comfortable to use and its design is refined and very good looking. As with all things that are created with lots of attention to detail though, it's a little expensive for the average user.

The SH771 is a laptop that weighs only 1.45kg, but it feels well balanced and is very easy to handle with one hand. That weight includes the built-in DVD burner, which is one of the no-compromise features that Fujitsu has packed in to this little unit. You can make the notebook even lighter by using the plastic weight saver that's supplied. The DVD bay is modular and can also be used to house a second battery and other accessories. One of the other accessories is a projector unit, which we think is one of the more interesting and innovative accessories to be offered for a laptop, although we have only heard about it and not seen it in action.

The matte texture of the LifeBook SH771 is very soft and it feels brilliant to touch. In a way, it's a finish that is an immediate indicator as to the quality of this laptop. But it's not all good news. After prolonged use, the lid and the chassis will show off more fingerprint marks than a dusted crime scene. You'll need to use a micro fibre cloth to keep the unit looking clean and fantastic. You should also keep the laptop in a protective case or sleeve when transporting it, otherwise scratches may tarnish the finish and expose the magnesium alloy beneath.

A tapered design increases the notebook's thickness from around 20mm at the front to 25mm at the rear (with the lid closed). The build quality of the laptop's base feels strong and it has a graphite texture that sparkles in a subtle way. The hinges that hold the screen are stiff and perfectly keep the angle you desire. As a trade-off, you can't open the latch-less lid using just one hand.

Once you lift the lid on this unit, you'll notice both a regular touchpad and a little circular pad to its right. This extra pad can be used for either vertical scrolling or controlling the volume (you can tap to change the pad's function). It's a design that definitely takes a lot of time to get used to, especially if you're used to scrolling with a two-finger gesture, which the main touchpad does not support. It's an 80x40mm Synaptics pad with great accuracy and smooth movement, but the limited multi-finger gesture support and the small size is a sore point for us. Nestled between the left- and right-click buttons is a second generation biometrics device that uses a radio frequency rather than optical scanning to process fingerprints. It works in conjunction with OmniPass, which runs in the background. 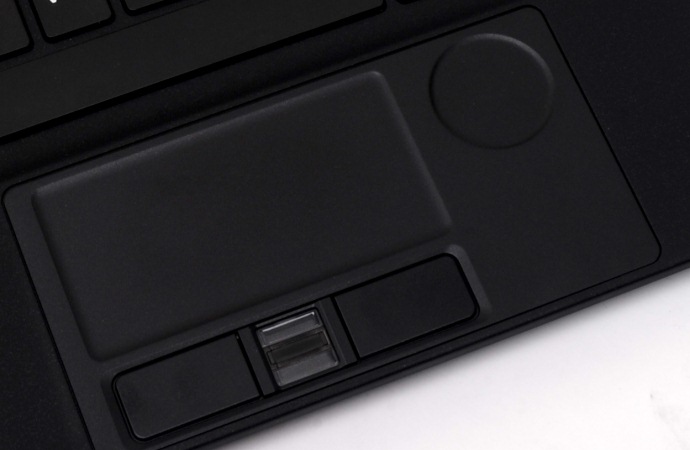 The touchpad is small and has a separate, circular scrollpad.

We found the LifeBook's keyboard to be excellent during our tests. It has soft keys that feel good to hit and they bounce right back up like a champ. They are in a chiclet layout and they are spill resistant. There are some things you need to get used to though, such as the page up and page down keys being directly above the left and right arrow keys, and the delete key being one spot in from the top-right corner of the board.

The keys themselves have a matte texture with blue (dichromatic) highlights at their base and they are attractive to look at. The keyboard is not backlit though and Fujitsu says this is to ensure battery life is not compromised. We're not fond of this argument because you could always disable the keyboard backlight when using the laptop while out during the day, and then use the backlight at night when you're at home and near a wall outlet. 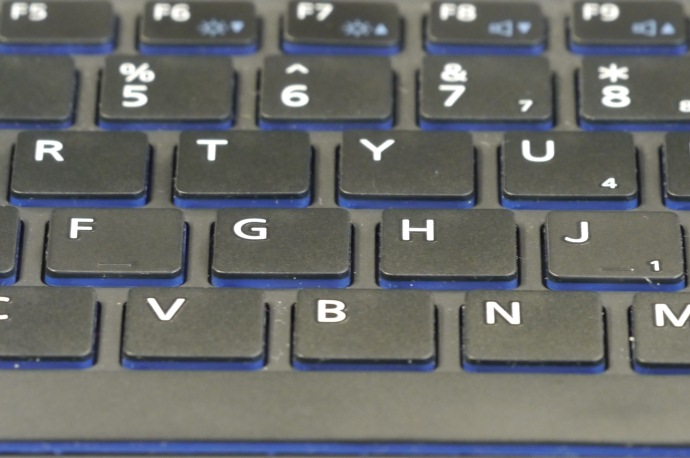 The keyboard isn't backlit, but it sure looks good and feels great to type on.

In our Battery rundown test, in which we disable power management, enable Wi-Fi, maximise screen brightness and loop an Xvid-encoded video, the laptop lasted 3hr 36min. Considering the CPU in this laptop is a full-voltage model, rather than a more efficient (and slower) low-voltage model, this is a decent, although not spectacular, result. When using the laptop for Web browsing and word processing, and with medium screen brightness, we got almost five hours worth of usage.

How much life you get away from an outlet will depend on the tasks you undertake and the settings you use. You could also implement 'Eco' mode to get the absolute most out of the battery — it disables all communications devices, mutes volume, dims brightness, changes the screen's refresh rate and lowers the CPU frequency, so it's only for dire situations. If you want more life away from an outlet, a better option is to just purchase a second battery (which has a 27 Watt-hour rating; the main battery has a 67Wh rating). Fujitsu claims that its power adapter has a 0-watt feature, which means it won't draw any power when it's plugged in and idle. In our tests, it actually showed consumption of 0.1W, but this is still better than other laptop power supplies, which can consume 0.3-0.6W when in the same state. 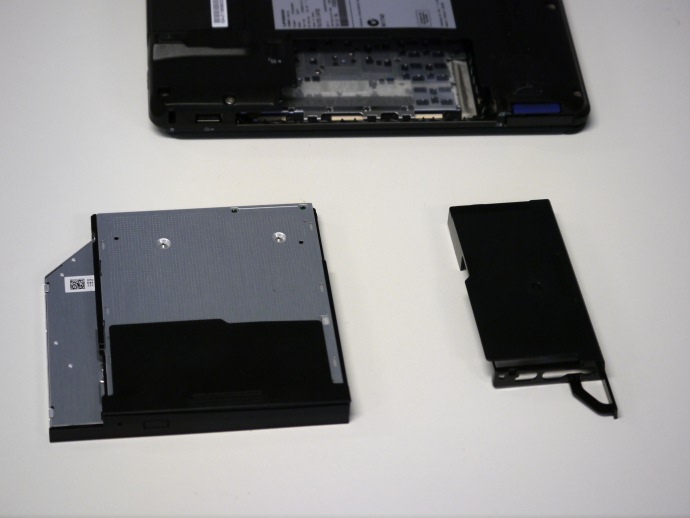 The configuration of the LifeBook SH771 includes an Intel Core i5-2520M CPU with a 2.5GHz frequency, two cores and Hyper-Threading. It has integrated Intel HD 3000 graphics, 4GB of DDR3 SDRAM and a 640GB hard drive (a 7200rpm Toshiba MK6461GSYN model). It recorded times of 44sec and 50sec in the Blender 3D rendering and iTunes MP3 encoding tests, respectively, while taking 1hr 5min to complete the AutoGordianKnot DVD-to-Xvid conversion test. Its Blender 3D rendering and DVD conversion times are a little slower than we expected when compared to other machines that use the same CPU, such as the Dell Latitude E6420, which means you'll probably want to tweak the unit's configuration to get the most out of it — it comes with plenty of pre-loaded software that runs in the background.

Its hard drive performance was good, recording 36.55 megabytes per second (MBps) in our file transfer test, in which we duplicate 2.12GB worth of data, and it also put up a good showing in CrystalDiskMark, recording a read rate of 114.9MBps and a write rate of 113.6MBps. A sensor is provided, which can detect excessive movement and bumps and stop the drive to help prevent damage and data loss. Its sensitivity can be tweaked if you find that it kicks in with even the slightest notebook movement.

The LifeBook SH771 is fine for office work and multimedia tasks, and it's also a good multi-tasker. However, it's not good for tasks such as photo and video editing, primarily because the screen has narrow vertical viewing angles and is prone to reflecting light sources. This can make it hard to view fine details and colours accurately. It has a native resolution of 1366x768. Graphics are handled by the integrated Intel HD 3000 adapter, which recorded 3137 in 3DMark06. It's not designed for gaming.

You can plug in an external monitor using HDMI or VGA if you wish. Other ports include USB (one USB 3.0 and two USB 2.0), Gigabit Ethernet, and separate headphone and microphone ports. You also get an SD card slot, an ExpressCard/34 slot, a built-in DVD burner, a webcam with built-in mic, a Kensington lock and an easy-to-find physical wireless toggle. One of the USB ports can be used to charge USB devices, even when the laptop is switched off, which is handy.

The build quality of the unit is solid, and we're fans of the notebook's design, which we think looks elegant. The only thing we'd change is the LEDs, which look a little harsh. Another interesting feature of the SH771 is the 'filter' that is located on the base, which is really more of a scraper that can be used to remove any caught dust near the heat sink, and also to provide some room to blast the fins with compressed air if needed. While it's a comfortable notebook to use, its underside can get quite warm when the CPU is working hard and you need to be careful not to block the air vent while using it on your lap.

The dust filter can be removed to make it easier to clear dust from the heat sink's fins.

All up, the LifeBook SH771 is a good notebook and we enjoyed using it. We do wish it had a better screen, a more conventional touchpad (the separate scroll pad was just too hard to get used to) and that the lid and chassis didn't pick up so many fingerprints. The lack of a keyboard backlight saddens us, but the keyboard itself is great. For business users looking for something a little more serious than an Ultrabook, but in a similar form factor, it's a decent pick.

A high-end model is available, which comes with an Intel Core i7 CPU, a 128GB solid state drive and 8GB of RAM.