Fujitsu's LIfeBook TH700 is a 12.1in convertible tablet PC that's a lot of fun to use. Its touchscreen works very well and you can write or draw on it using the pen, or you can use your fingers to select things and rotate and zoom pictures for example. It's also great to use as a regular laptop, although it's a little heavy and its screen isn't all that bright.

If you absolutely must own a decent tablet PC, then you should consider Fujitsu's LifeBook TH700. It's a notebook with a tablet-convertible 12.1in screen that uses Wacom dual digitiser technology so that you can interact with it either by using your fingers or a pen. Best of all, you can write and draw on the screen very comfortably so it’s a good solution if you’re a graphic artist who wants to use a notebook and a graphics tablet while on the road.

Want something smaller? Check out our review of the 10.1in Fujitsu LifeBook TH550.

We may be a little baffled by the use of touchscreens on desktop PCs, but we’ve liked the idea of tablet-convertible laptops for a while — especially Fujitsu tablets, which seem to be a cut above the rest. With the LifeBook TH700, you get a 12.1in laptop that’s comfortable to use as a regular laptop, but a lot more fun to use as a tablet. The screen’s hinge swings both ways, folds back over the keyboard and latches into place, giving you a solid platform on which to write notes, draw pictures or just browse the Web. You can use flick gestures to navigate within a Web browser and scrolling can be undertaken easily by dragging one finger — similar to how you would scroll on an iPad.

The screen is accurate to write on and it does a good job of recognising most cursive writing. But it’s not always 100 per cent accurate, and if you write fast enough, you might confuse it.

This part of the review was handwritten: Using the pen.it Was a little awkward as our hand)lkept moving the cursor, and just after 'hand is when me accidentally hit the rotates Green button.

In the above paragraph, we noticed that sometimes our hand would move the cursor if we put too much pressure on the tablet, and depending on the way we held the tablet (for example, if we were writing in portrait mode toward the screen’s buttons) then we would sometimes accidentally hit the button that rotates the screen. But these are things you learn to avoid doing after a while. We did notice that the screen sometimes switched orientation on its own for no reason a little while after we’d already switched to tablet mode, and we couldn’t figure out why. For example, when we ran the tablet calibration program in landscape mode, it would switch automatically to portrait mode before we could finish the calibration.

Handwriting recognition is very accurate, unless you happen to write very fast and very messily. 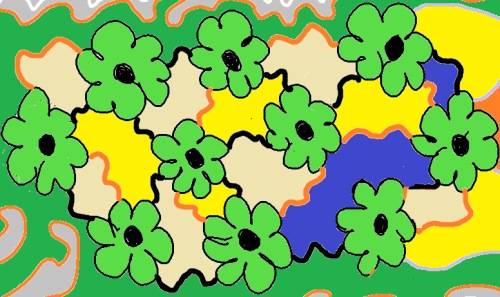 The LifeBook TH700 is actually a lot of fun to draw on — even if you have no talent!

While you’re in tablet mode, you can use the Fujitsu Menu application to access the Control Panel and change the screen brightness among other things. The screen itself is slightly reflective and not always easy to see depending on which orientation you have it set to. For example, if you look at it upside-down or in portrait mode, then the narrow viewing angles can make it a little hard to read. But overall, it’s easy to view in an office and even outdoors — unless it's a bright day. 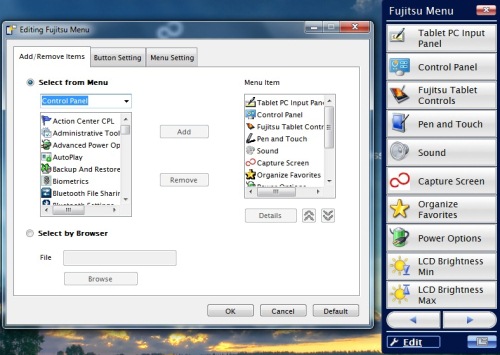 You can use Fujitsu's Menu application to quickly access tablet controls and other device settings. The menu items can be customised.

As a regular notebook, the LifeBook TH700 feels good to use. Its keys have good travel and, despite the laptop's small size, the spill-resistant keyboard isn't uncomfortable to type on. We did find the touchpad to be a tad uncomfortable because it's small (67x37mm) and also because the cursor sometimes didn't track across the screen properly.

Powering the LifeBook TH700 is a relatively modest configuration for a $2099 laptop. It has a 2.13GHz Intel Core i3-330M CPU, 2GB of DDR SDRAM, a 500GB hard drive and integrated Intel GMA HD graphics. It's a configuration that won't set the world on fire, but it's powerful enough to comfortably run office applications and, most importantly, the touchscreen interface and the handwriting recognition programs. You won't notice much lag while you're writing with the pen. In our Blender 3D rendering and iTunes MP3 encoding tests, the TH700 recorded 1min 06sec and 1min 13sec, respectively.

These results are pretty good going when you compared to the 2.26GHz Core i3-350 CPU in Medion's Akoya E7214 for example, which recorded 1min 5sec and 1min 10sec. In our video encoding test, our DVD file took 1hr 31min to be turned into a 1.5GB Xvid file, which is actually one minute faster than the Medion. That's not bad for a little laptop, but if speed is of primary importance to you then you can always opt for faster Core i5–based model.

The build quality of the LifeBook TH700 is good, although it is a little rattly. That's because its battery is located in the front-right quadrant of the chassis instead of along the spine, so when you pick up the notebook with one hand from this corner, it always feels like something is loose. The notebook is very sturdy though. The battery has six cells and it lasted 2hr 46min in our rundown test, in which we disable power management, enable Wi-Fi, maximise brightness and loop an Xvid-encoded video.

Although the notebook is small, the touchscreen adds some extra weight and the TH700 tips the scales at just over two kilograms. However, its rich configuration also contributes to the overall weight. It includes a DVD burner, three USB 3.0 ports, FireWire, HDMI, Gigabit Ethernet, VGA (D-Sub), an SD card slot, an ExpressCard/54 slot and headphone and microphone ports. Furthermore, you get a high quality, 2-megapixel webcam, Bluetooth and 802.11n Wi-Fi. You can remove the DVD burner and replace it with a weight saver if you wish — but it won't save you more than a few grams.

The LifeBook TH700 borrows facets from consumer and corporate notebooks and its target market is business users who want something a little more interesting to look at than a drab, boxy PC. The lid and palm rest are glossy with hints of sparkles, while the screen's bezel is matte black and also houses a fingerprint reader, which allows you to access Windows and your favourite Web sites by swiping your finger instead of typing passwords. This is convenient when you're in tablet mode.

Overall, we think the LifeBook TH700 is a great little tablet PC that's well worth considering if you want plenty of features, including handwriting recognition. We love the fact that you can use both your fingers and a pen to navigate the screen. The only annoying aspect of the tablet was its tendency to switch orientation on its own. It runs Windows 7 Professional, and doesn't have any touch-enabled applications installed apart from Windows 7's Touch Pack and Fujitsu Menu. We’d like Fujitsu to supply more touch-centric applications — and perhaps develop a touch-enabled front-end to load your favourite applications, rather than having to browse the Windows 7 menu interface.

You can read all about Fujitsu's environmental policy on its Web site: http://www.fujitsu.com/global/about/environment/approach/policy. One of the 'green' features of the LifeBook TH700 is its Power Saving Utility, which allows you to get more life out of its battery by disabling features. For example, when you enable this feature, it mutes the audio, disables the optical drive and stops supplying power to the slots, Ethernet and FireWire ports. It also reduces the screen brightness to a level of three out of 12.