A versatile 12.1in notebook that can be converted into a tablet The TH701 is a fully-featured notebook that can easily be converted into a tablet. Its touchscreen is accurate for handwriting and drawing but it's a device feels a little too bulky to hold comfortably in that form factor. That said, it's not to be used like an iPad; it supplements notebook functions by providing touch input, and you can rest it on a table to write or draw on it.

The Fujitsu LifeBook TH701 is a tablet convertible laptop with lots of features and a more-than-decent configuration considering its size. It can be used as a regular notebook for long typing sessions and regular work, or as a tablet for when you need to use a touch interface, draw or take down notes. It uses dual digitiser technology so that you can use your finger or the supplied pen to navigate the screen and the overall user experience is a good one. However, we're not fans of the notebook's design and finish, which is a little bulky and way too glossy for our liking.

It's the type of product that will have more appeal for professionals rather than home users, yet the finish of the TH701 is very "consumer". Not only is it glossy and slippery to touch, it also has sparkles, although they are subtle. It's a very reflective finish that can be annoying when used in an area with lots of light sources and the smooth and slippery palm rest can feel uncomfortable while typing. Furthermore, the finish can be relatively easily scratched and if the scratch is deep enough if it will expose the metal underneath. We'd much prefer a tougher matte finish for this laptop's lid and palm rest. In contrast, we like the finish of the Fujitsu LifeBook SH771 a lot better, even though it isn't fingerprint resistant.

The TH701's screen measures only 12.1in, so the footprint of the notebook is compact. It's also a bulky notebook, but it does have a lot of features. You get a built-in DVD burner in addition to a comprehensive set of connections: three USB ports (including one USB 3.0 port), HDMI, VGA, Gigabit Ethernet, headphone and microphone jacks, an SD card slot and a mini-Firewire port. There is also an ExpressCard/54 slot for expansion, a slot for the stylus (and a facility to tie it in place) and you also get a convenient, front-mounted physical Wi-Fi toggle.

The notebook weighs 2.1kg, which is a little heavy for such a small unit, with some of the extra weight coming from the touchscreen. When the screen is folded over to make a tablet form factor, the thickness of the unit is approximately 40mm and it can be tiring to hold for a long period of time. You can reduce the weight a little by replacing the DVD burner with a plastic weight saver module.

The screen rests on a single hinge that provides both tilting and swivelling actions. It's a bi-directional hinge, which means you can turn it left or right, but it's a somewhat loose hinge. When using the TH701 in its laptop form factor, simple actions such as tilting the screen can cause it to swivel slightly out of place. This is because the hinge doesn't really lock, and there also aren't any locks at the sides to hold the screen securely in place, only a couple of flat resting spots. When you turn the screen around to make the tablet form factor, you can use the latch to lock it into place. 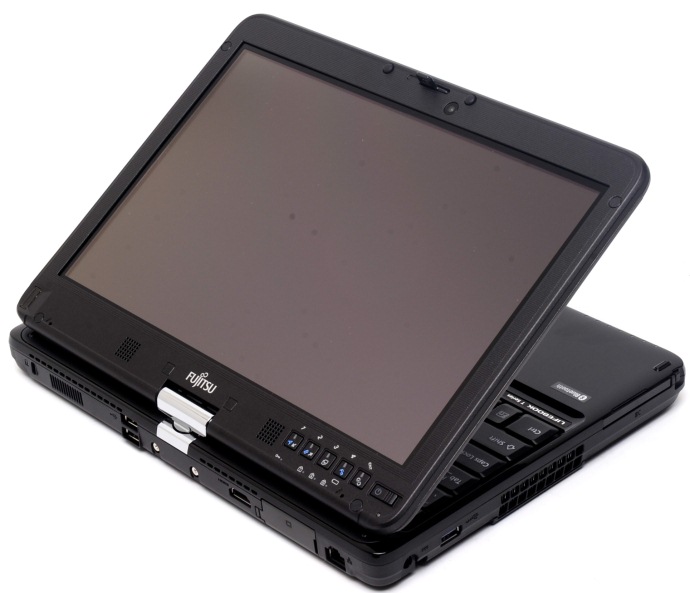 The dual digitiser touchscreen is capacitive, supports multi-touch and it also works with the supplied stylus.

On the bezel of the screen you can find the sliding power button, speakers, a webcam, a fingerprint reader and five buttons. One is a function button that brings up the "Fujitsu Menu", which allows you to control the screen brightness, sound and power saving settings conveniently when in tablet mode. Another button is for quickly accessing the Windows lock screen, two are shortcut buttons, and another is for rotating the screen manually. If you'd prefer the computer to detect the screen orientation automatically, then you can enable the "Auto Rotation Utility" from Windows' All Programs menu.

The shortcus buttons that can be used when in tablet mode.

Once you calibrate the screen, writing, drawing or just pointing on the screen to navigate Windows will be a pleasure. The accuracy of the pen position on the screen was high and it worked even when we used the pen very close at the edges of the screen. That said, we couldn't produce marks at the very bottom edge of the screen as it was off by around 3mm. You can use the pen to write on the screen and you can rest your hand on the screen while you write or draw, mostly without marking the screen if you're in a drawing program.

The TH701 uses Windows 7's built-in tablet features, so it's adept at recognising handwriting and correcting spelling mistakes. Running writing can be handled by the tablet fairly well, and most times it will understand even the messiest excuses for writing. You'll have to get used to the limited space of the writing interface and make sure you insert your writing into your target application regularly.

On the inside, the Fujitsu has plenty of power for processing the handwriting, facilitating multitasking and being generally quick when running office applications and media encoding. It uses an Intel Core i5-2430M CPU, which runs at 2.4GHz, has two cores plus Hyper-Threading, and takes care of the graphics (Intel HD 3000). It's joined by 4GB of DDR3 SDRAM and a 7200rpm, 500GB hard drive. In our Blender 3D rendering and iTunes MP3 encoding tests, the TH701 recorded times of 43sec and 51sec, respectively, which shows that it's no slouch. This was also shown in the AutoGordianKnot DVD-to-Xvid file conversion test, which took a respectable 53min to complete. Compared to the similar LifeBook TH700 tablet that we reviewed in 2010, which used a first generation Intel Core i3 CPU, this model is significantly faster.

In 3DMark, a score of 3568 was reached, which means that there is plenty of graphics processing power for high-resolution photos (although the 1280x800 screen resolution and visual quality of the screen aren't conducive to photo editing). Its hard drive recorded read and write times of 95 megabytes per second (MBps) in CrystalDiskMark, and a more modest 31MBps in our own test, in which we duplicate 2.1GB worth of files from one location on the disk to another. During regular Web browsing, document creation, and other everyday tasks, the laptop felt responsive and we never noticed a slow-down in performance, despite the huge amount of software that Fujitsu has pre-loaded and which runs in the background.

The laptop didn't get too warm while being used for Web browsing and office tasks. It has a heat sink and fan on its right side and it isn't all that noisy either. There is a removable compartment next to the heat sink, which allows you to easily clean lint and dust that can accumulate over time.

Unlike most laptops, the battery on the LifeBook TH701 is not on the spine. Instead, it sits in a compartment in the base under the right palm rest and it can be removed by manipulating two little clips. It has a 67 Watt-hour rating, but it didn't last as long as we'd hoped it would. In our tests, in which we disable power management, enable Wi-Fi, maximise screen brightness and loop an Xvid-encoded video, the notebook ran for only 3hr 15min. For comparison, the Samsung Chronos, which is a 15.6in notebook that we tested with the same CPU, lasted over four hours in this test. That notebook also has a sealed battery design. Compared against the last generation LifeBook tablet, the standard battery life is about 30min better on this model.

Fujitsu allows you to increase battery life by adding a second battery to its modular bay, in place of the DVD burner or weight saver. Furthermore, there is a power utility that allows you to switch off many of the system's devices (such as the network features, FireWire port, DVD burner and ExpressCard slot) in a bid to get as much life out of the battery as possible. You can also set the battery charging utility to only charge the battery up to 80 per cent of its capacity in order to prolong its life (in terms of the number of charging cycles it can handle).

The keyboard on this laptop is not backlit, but it feels very comfortable to type on -- the keys are soft and possess good travel and bounce. There are a couple of keys in positions that need some getting used to, such as the delete key being one in from the top-right corner and the page up and page down keys being right above the left and right arrow keys, although these are convenient.

The touchpad is way too small though and it doesn't support gestures such as two-finger scrolling or three-finger flicking like many other Synaptics-based laptops that come through our Test Centre. However, the fact that it doesn't support two finger scrolling or three-finger flicking probably doesn't matter too much because of its small size. It would be very hard to perform these functions on a pad this size.

A mobile broadband module is installed in the unit, there is an antenna that can pop up of the screen, and a SIM card can be inserted in the battery compartment. It worked perfectly with our iiNet SIM card and we were able to use either Windows' networking or the supplied mobile broadband software interface to get online without using our phone as a hotspot.

The Fujitsu LifeBook TH701 is a good laptop in terms of what you can do with it. However, the design and finish on this unit could stand to be better. The hinge, in particular, was very loose on our test model, the touchpad is way too small and the finish is too glossy and feels slippery. Its performance is very good for a small laptop though and it supports plenty of connectivity features that can be very useful -- even integrated 3G. Check it out if you want a well-featured laptop that can also supply a versatile touch interface.