The Fujitsu Lifebook U772 offers plenty of features and good style, but user comfort is not one of its strong points Fujitsu's U772 Ultrabook looks good and has plenty of features, but it offers a poor overall user experience that's inexcusable for a premium notebook with such a high price tag. It needs a better screen, keyboard and touchpad, pronto, and a quieter cooling system would also be of benefit.

The look of Fujitsu's Lifebook U772 14in Ultrabook is one that will immediately catch anyone's attention. Not just because it is bathed in a striking red colour, but also because it has clean lines and a very thin profile. It's an Ultrabook that's designed for business, which means it ships with features such as a vPro chipset, TPM, biometrics, Gigabit Ethernet (via dongle), mobile broadband (optional), a matte screen and a docking station connector — all the stuff that should get IT managers interested. However, despite its good looks and promising feature-set, the U772 is ultimately a let-down. Its keyboard is not good enough for any serious typing, its touchpad isn't among the most comfortable we've used, it's loud, and its screen needs better vertical viewing angles.

With a thin base that houses a third generation (Ivy Bridge) Intel Core i5-3427U CPU, 4GB of DDR3 SDRAM, a 500GB hard drive and a 32GB solid state cache drive, the Lifebook U772 supplies plenty of performance, whether you want to run typical office programs, or perform media and transcoding tasks. It was fast during our tests, where it returned times of 45sec and 53sec in our Blender 3D rendering and iTunes MP3 encoding tests, respectively, and it took 54min to convert a DVD file into an Xvid-encoded file using AutoGordianKnot.

The CPU is an ultra-low-voltage model with a TDP (thermal design power) rating of 17W. It has a standard frequency of 1.8GHz, two cores and Hyper-Threading. It needs to be an ultra-low-voltage model because the base of the unit is so thin and there isn't much room for cooling. Compared to the other Ultrabook we've seen that uses a ULV Ivy Bridge-based Core i5 processor, Samsung's Series 9 (which runs a 1.7GHz model), the Fujistu's performance was expectedly better in the Blender 3D rendering and iTunes MP3 encoding tests, recording 45sec and 53sec, respectively. However, it was 1min slower in the AutoGordianKnot test (54min).

We noticed that the harder the U772 ran, the more noise it made. It has one fan that's located in the left side of the base and it makes a very audible whirring sound when it quickly pushes air through the left exhaust vent. We think that if used in the context of a quiet boardroom, while giving a graphics-heavy presentation, for example, or even when simply working on the notebook at night, it could get annoying. The fan picks up clean air from the base of the chassis and it's too easy to block the air intake when you use the notebook on your lap.

While using the U772 Ultrabook for basic tasks — Web browsing, emails and YouTube viewing, for example — the base got a little warm, but not warm enough to be uncomfortable. When running processor-intensive tasks, that's when the base can get uncomfortably warm, but the notebook should be used on a flat surface in those instances so that it can be properly ventilated. 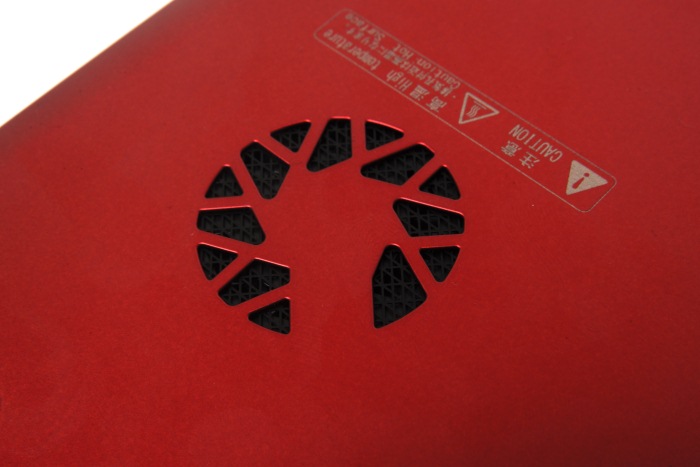 The fan intake on the base of the notebook.

A conventional WD Scorpio (WD5000LPVT) hard drive is installed in the Fujitsu U772, supplying a capacity of 500GB and a spin speed of 5400rpm in a 7mm form factor. In CrystalDiskMark, it recorded read and write rates of 118 megabytes per second (MBps), which is a good showing, especially for the write speed. In our own file duplication tests, the drive put up 40MBps, which is also very good, and faster than the storage we've seen in other recent Ultrabooks, such as Dell's XPS 14, which also has a 5400rpm, 500GB drive. Along with the hard drive, Fujitsu has implemented a 32GB SanDisk solid state drive, which is used as a cache drive to speed up boot times and the loading of applications.

We have no issues with the overall performance of the Fujitsu Lifebook U772. We found it to be zippy for everyday work. It also supplies very decent graphics performance for a thin laptop — its integrated Intel HD 4000 graphics recorded a score of 4309 in 3DMark06. A cold boot took 33sec, while waking from sleep mode took 3sec.

The Fujitsu U772's chassis houses a 4-cell battery with a 45 Watt-hour rating. In our rundown test, in which we disable power management, enable Wi-Fi, maximise screen brightness and loop an Xvid-encoded video, the laptop lasted 3hr 49min. This is a time that is on par with other third generation Core-based laptops that we've seen, including the Samsung Series 9. In fact, it lasted 10min longer than the Series 9 because it doesn't have as bright a screen as that Ultrabook (and a slightly more powerful battery). When using the Fujitsu for basic Web browsing, document creation and for watching the odd YouTube clip or listening to some songs now and then, it lasted over five hours. That was with medium screen brightness.

The power pack that ships with the Lifebook U772 is the smallest we've seen for an Ultrabook. It's a slim rectangle that's 13mm long, but only 29mm wide and 29mm thick. It makes the U772 a very space efficient Ultrabook and doesn't add much at all to the overall weight (the laptop itself is 1.4kg, and the power adapter and cables takes the weight to only 1.7kg). 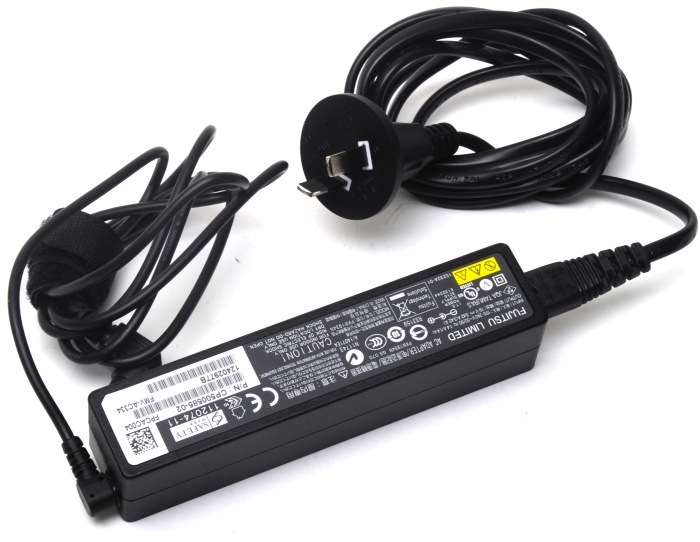 We like the look of the Fujitsu Lifebook U772 very much. It's only 18mm thick, has a lovely design (although we'd do something about those blue status LEDs), and it includes useful connectivity options around the edges. You get three USB ports (two of which are USB 3.0), full-sized HDMI, a combination headphone and microphone port, and an SD memory card slot. There is also a custom port that is used to plug in the required dongle for Gigabit Ethernet access. Importantly, it also includes a docking connector on its base, which can supply up to four more USB 3.0 ports, a VGA port, a DVI port, a Gigabit Ethernet port and power. This feature, along with the TPM, fingerprint reader and vPro features, make the U772 a prime Ultrabook for the business market.

The array of ports on the left side.

The array of ports on the right side. 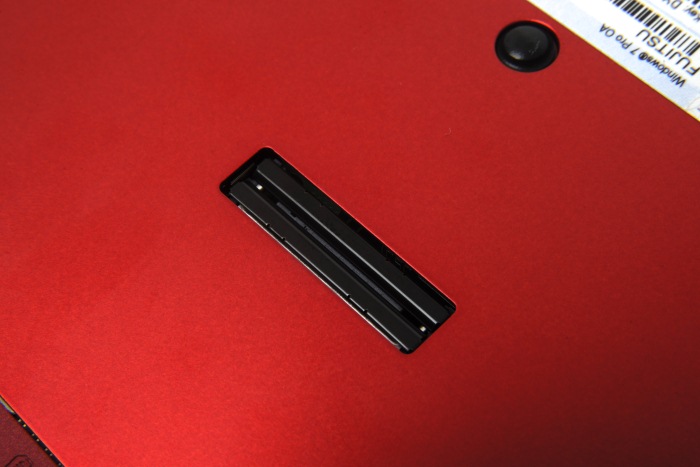 You also get Bluetooth and there is a dual-band, 802.11n Wi-Fi adapter that's Wi-Di-ready (using Intel's Centrino Advanced-N 6205 wireless module). The rear of the notebook has a slot for a SIM card, and this can work in conjunction with an optional mobile broadband module. We like the inclusion of the slot in this area; it makes it very easy to insert and remove SIM cards, without having to remove the battery pack first. That said, the battery pack can't be removed easily anyway. It sits inside the chassis and can only be accessed if you remove the bottom panel, which is held by 10 covered screws.

The construction of the laptop's chassis feels good and all the ports are well laid out. However, the location of the Kensington cable lock right next to the USB port on the left side could be inconvenient in limited scenarios. The hinges that hold the screen in place are strong, but they don't do enough to stop the screen from shaking a little when it's moved.

The 14in screen itself has a native resolution of 1366x768 and a matte finish. It's not susceptible to reflecting room lights, but you do need to use it at high brightness to get the best out of it. As is the case with many laptop screens, its vertical viewing angles aren't great and we found ourselves often having to adjust the tilt angle when looking at photos and videos — they looked too pale or too dark unless the angle was perfect.

We're not fans of the keyboard on this laptop. We thought we could get used to it, but after more than a week of use, we feel that it's a major let-down. The keys feel too shallow and they require a fair bit of force to hit, which can make long typing sessions tiring. Furthermore, the space bar required the hardest hit and was the biggest cause of spelling errors for us. The keyboard bounces a lot when it's hit and just doesn't feel as sturdy as the Series 9's keyboard, for example — and that laptop is even thinner than this one. It's not backlit either, although Fujitsu says a new version with a backlight will be available as soon as its development is complete. In a nutshell, typing on this laptop is not enjoyable, even when only responding to emails or doing other basic tasks. 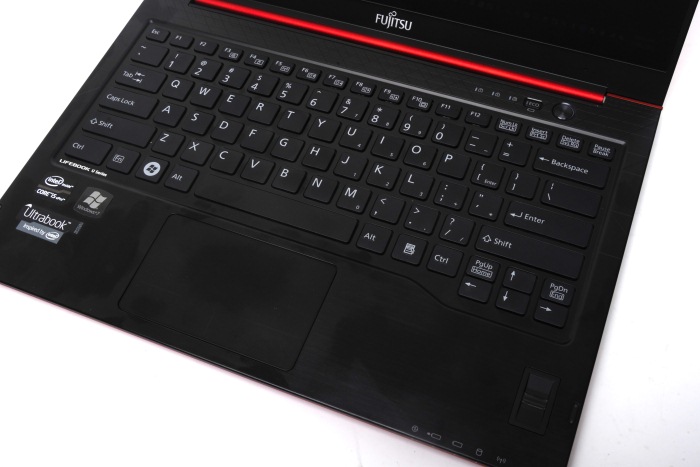 The keyboard, which is no fun to use.

The touchpad is 98x61mm and it performed adequately in our test period. It's big enough to be useful for three- and four-finger gestures and it recognised three-finger and four-finger swipes correctly when we attempted them. The left- and right-click buttons underneath the pad aren't good though; they require a little too much force to operate correctly, ultimately making the touchpad uncomfortable to use. We like the fact that the fingerprint reader on the right side of the palm rest can be used for scrolling. We found ourselves using this frequently instead of the two-finger scrolling gesture we usually employ to browse long documents. 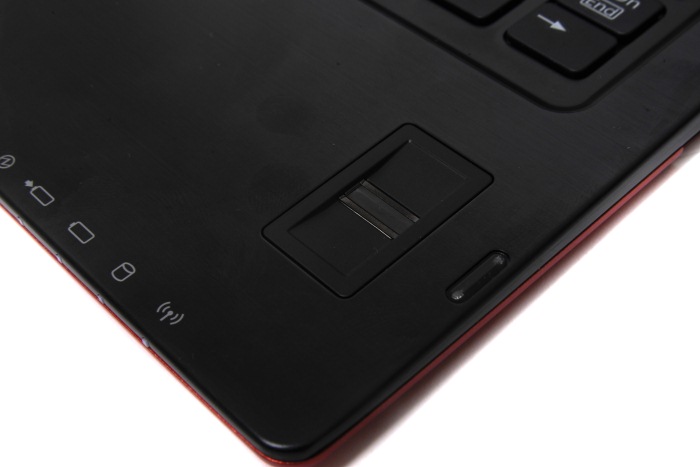 The fingerprint reader, which can also be used for scrolling.

The ingredients are there for the Fujitsu Lifebook U772 to be a class-leading Ultrabook. It has all the right features, an impressively slim and light design, as well as good looks. Unfortunately, it doesn't provide a good overall user experience. Its keyboard is simply too hard to type on, its touchpad could be better, its screen's vertical viewing angles are too narrow for a premium Ultrabook, and it can be a noisy Ultrabook when its CPU is put to work. If these aspects of the U772 are improved, it could very well become a killer product.