Overall, G-Data InternetSecurity 2010 conforms to our idea of a traditional security suite by offering protection that is solid on the basics 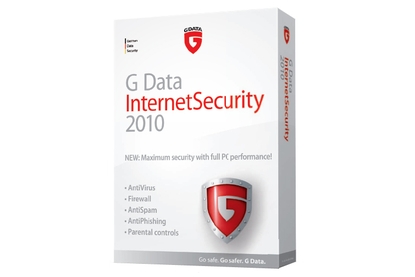 In our comparative reviews, G-Data InternetSecurity 2010 was the best all-around suite, offering both protection — it can to detect and block traditional malware while deploying superior heuristics to stop newer threats — and several additional security features for one low price.

It may not be the first internet security suite that springs to mind, but G-Data InternetSecurity 2010 (one-year, one-user licence: US$29; one-year, three-user licence: $39) is among the best we've seen at malware detection and removal.

In a number of categories G-Data InternetSecurity 2010 scored the best test results and offered more protection features than many other suites. And it's a good value for its price.

G-Data InternetSecurity 2010 uses a combination of Avast and BitDefender antivirus engines, and in AV-Test.org's extensive malware-detection tests that combination worked.

G-Data had the highest detection rate of all the products tested, identifying on average 99 percent of the 722,372 collected samples of Trojan horses, worms, password-stealers, and other nasties.

G-Data InternetSecurity 2010 identified and removed 100 percent of the files and Registry changes that malware had put in place, but it failed to scrub the Registry for any remaining traces of the test infections.

It did detect 100 percent of the inactive rootkits - stealth malware used to hide infections from PC users and security software alike - but G-Data InternetSecurity 2010 removed only 77 percent of rootkits, a result that was the second lowest of the products tested.

G-Data does get credit for having the fewest false positives in heuristics; it misidentified only 1 file out of 5,000 test files.

G-Data achieved its best scores with behaviour-based detection of malware. In overall behavioral detection G-Data InternetSecurity 2010 produced a warning 80 percent of the time; detected and blocked 47 percent of malware samples; and removed 13 percent.

The suite scored particularly well when it came to proactively identifying unknown malware for which it lacked a signature. Here, G-Data InternetSecurity 2010 scored well above average.

According to AV-Test, G-Data responds the quickest to new widespread malware attacks, typically in less than 2 hours. As a result G-Data produced the second highest signature updates per month (551 in January 2009, 506 in February 2009, and 642 in March 2009), averaging 18 per day, bested only by Norton with over 200 per day.

AV-Test detected short on-demand scan times of 17 seconds for a 741 MB file, and on-access scans of 73 seconds compared with only 41 seconds to copy the same file on a system without antivirus installed.

G-Data does scan incoming email and IM messages, and provides its own antispam tool. For antiphishing, G-Data InternetSecurity 2010 does not use a browser toolbar, but nonetheless relies upon the information from Netcraft to identify and block phishing sites.

G-Data is perhaps too cautious on the web, though. It falsely warned that one program installed on our desktop was a potential security threat: the xb-Browser, which allows you to browse the web anonymously.

Overall, G-Data InternetSecurity 2010 conforms more to our idea of a traditional security suite by offering protection that is solid on the basics. Its interface is the most advanced we've seen, allowing sophisticated users to drill down to fine-tune each setting, but at the same time, it won't alienate casual users. And parental controls come within the interface.

The file data shredder exists as a separate icon on the desktop, which makes sense, since that way, you don't have to open G-Data to securely delete a file. One nitpick: the signature file updates, announced with a pop-up, need to happen in the background in a future release, or, like CheckPoint ZoneAlarm Extreme Security 8.0, with a change in the task tray icon.