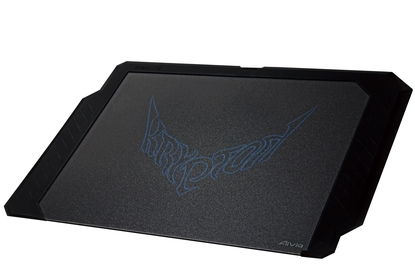 The Aivia Krypton mouse is a solid effort from Gigabyte that should appeal to casual to core gamers. We like its customisation, both physically and through software, but we think its overall feel could be a little better.

The mouse is one of the most important tools when it comes to PC gaming, so it is surprising when people spend thousands of dollars upgrading their rig only to use a generic mouse. Unless one uses a USB gamepad, the entire PC gaming experience is reliant on the keyboard and mouse combination. For that reason alone, anyone who is serious about playing games on the PC platform should look into getting a high quality mouse. Until now, Gigabyte had released some low-to-mid-range mice that were typically aimed at mainstream users. The Aivia Krypton is the company's first real entry in the upper end of the market, targeting serious gamers.

Unboxing and plugging in the mouse was a painless process, but the device requires a bit of tinkering to get it to look and feel just right. Customisation is a term often bandied about in the hardcore PC gaming space, and the Aivia Krypton has this in spades. The mouse comes with a hot-swappable chassis design that enables the user to adjust the feel and weight of the device to get the exact movement and dynamics they need for an application. The swappable part of the chassis is limited to the base of the Aivia Krypton, so the upper part of the device remains unchanged.

There are two chassis designs: 'speed' and 'control'. The 'speed' chassis comes with an abrasion-free ceramic foundation, which is targeted at players that need quick mouse movements and speed. The 'control' chassis has a smooth Teflon foundation which ensures precision movements for added control. The mouse's centre of gravity is also customisable, with empty slots located at the base for weights to be put into. Numerous pellets, such as 1.8g aluminum and 5.4g iron, can be placed at the base of the mouse in any combination. Whether the player wants to make the mouse right or left leaning, heavy or light, the Aivia Krypton is able to accommodate this.

A mouse is the only way to play real-time strategy games, and we tested the Aivia Krypton with the recently released StarCraft II: Heart of the Swarm. The mouse performed well during gameplay, even when the battles became frantic and required quick movements and clicks. This accuracy is aided by a built-in 8200 DPI sensor, which can also be adjusted using the included GHOST macro software from Gigabyte. The GHOST macro engine makes use of the mouse's 32KB memory to store macros, which helps to make the device as customisable on a software level as it is on a hardware one.

The first person shooter genre is another area where a mouse gets a workout, and we used the Aivia Krypton with Far Cry 3: Blood Dragon, another new release. Looking and aiming during gameplay was swift and accurate, even when it came to sections where the sniper rifle was required for precision shooting. To see how the Aivia Krypton works with older games, Crysis Warhead from 2008 was put to the test. This game in particular makes heavy use of the scroll wheel, as the main character's suit abilities are controlled with the middle button. The modern mouse performed well despite the age of the game, and switching abilities with the scroll wheel was fine even in the heat of a fire fight.

The mouse can be used with the Krypton two-sided gaming mousepad from Gigabyte. Just like the mouse, the mouspad has a dual-sided design. One side of the mousepad is composed of a low friction hard PVC side, which works well with ceramic casters, and the other is covered in a precise fabric side, which is appropriate for Teflon casters. The mousepad also features a non-slip rubber frame to keep the accessory in place on a desktop, ensuring that it does not move around during gameplay. Measuring at 425 x 287 x 6mm, the Krypton mousepad is surprisingly generous in real estate, though the size may make it difficult to use on smaller, more compact desks.

All up, a very good mouse, but we think that it could use more of a premium feel in its construction. This is something that it lacks against competing high-end products.