An Australian-only laptop offering for gamers on a budget 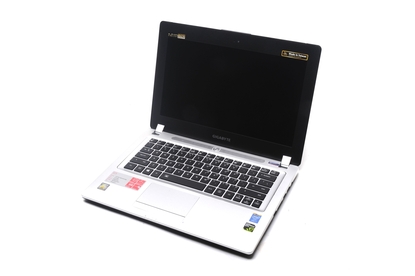 If you happen to be in the market for an inexpensive gaming laptop, look out for Gigabyte’s G3 at MSY stores. It’s a 13.3in model with a configuration that includes an NVIDIA GeForce GTX 850M graphics adapter, an Intel Core i7-4710HQ CPU and 16GB of RAM, and it should handle many modern titles well at medium image detail.

You shouldn’t expect the G3 (specific model G3-850-4703) to be refined and pretty. It’s a basic looking laptop that’s built to emphasise function over form, and it has a certain appeal because of this. The sides are full of useful stuff such as full-sized HDMI and SD card facilities, and there are four USB ports (two of them of the USB 3.0 variety), in addition to a Gigabit Ethernet port, a VGA port, and a headset jack. You get average speakers and a webcam, and there is an ambient light sensor as well.

We like the overall comfort level of the laptop, as it has a keyboard that is surprisingly easy to type on, regardless of the fact that it bounces around a little. The tray is held to the chassis with screws and a bit of adhesive, and for some reason our review model arrived with one screw missing, which exacerbated the movement of the keyboard. We shifted a screw from the middle to the missing area, which improved things a little.

Importantly, though, the keys feel soft, they have a decent amount of travel, and their layout is standard. Only the u and down arrow keys are half sized. It’s a backlit keyboard, and we like the Fn-Space bar combination that Gigabyte has employed to be the trigger for the backlight. On some other laptops you have to hunt for the key combination to switch the light on and off.

A touchpad of 100x55mm is installed just under the Space bar, and it has dedicated buttons for left- and right-click operation. That’s something that’s rarely seen these days as clickpad-style touchpads do the rounds, but we got used to it. It was accurate during our tests, and it performed all the functions that we’re accustomed to, such as two-finger scrolling and three-finger flicks. The scrolling direction was normal, which we approve of.

The other thing that makes this laptop comfortable to use is the screen. It has a Full HD resolution on its 13.3in viewable area, but the thing that stands out most is how vibrant it is. Colours are rich, brightness is high, and images just look like they pop off the screen. Our only quibble is that flickering was sometimes noticeable when solid colours were displayed on the screen.

The border around the 13.3in screen is noticeably thick. It’s 22mm at the sides and 31mm across the top. It was a shock to the system to use this laptop after freshly reviewing the Dell XPS 13, which has a barely noticeable 5mm thick frame at the top and sides. One of the reasons for the thick frame is that a G3 Plus model is available, which has a slightly larger 13.8in, Full HD screen installed.

It’s a design that makes the Gigabyte G3 a little large for a 13.3in unit, but it’s still not too hard to handle. The laptop is 340mm wide, 24mm thick (with the lid closed and including the rubber feet), and it weighs 1.76kg. If you plan on commuting with it, you also have to keep in mind that the power adapter is hefty (80x167mm), and you will need it regularly as the 61.2 Watt-hour battery might not leave you with too much juice, depending on how you use the laptop.

In our rundown test, in which we disable power management, enable Wi-Fi, maximise screen brightness, and loop a Full HD, MP4 video, the laptop lasted 3hr 15min. This was using the integrated Intel graphics, which the system auto-selects unless you make changes to the settings in the NVIDIA control panel. You will get more life out of it when you dim the screen and implement a power saving power profile, but again it’s related to your personal usage and how much your tasks tax the CPU.

The Core i7-4710HQ CPU combines with 16GB of RAM and a 128GB solid state drive with Windows 8.1 installed to provide good speed for everyday tasks. This was shown in our Blender 3D rendering test, in which the laptop stopped the clock at 18sec. This is the same as other notebooks we’ve seen with the i7-4710HQ and 16GB of RAM, such as the HP Omen.

The graphics performance may not be up to the level of the HP Omen or Alienware 13, which have the GeForce 860M adapter, but you are paying a lot less money for this laptop, and you can lower the graphics detail in order to speed up the performance so that it gives you playable frame rates.

Storage performance from the 128GB solid state drive drive (SSD) was decent. It recorded 517.8 megabytes per second (MBps) in CrystalDiskMark’s sequential read test, and 321.6MBps in the write test. It has a formatted capacity of 107GB and we found ourselves running out of space quickly -- when attempting to install our third game. Luckily, there is a 1TB hard drive installed as well, which allowed us to move our installation directories for Steam and Origin to that drive. The hard drive has a 5400rpm spin speed and recorded 114.6MBps and 112.5MBps in CrystalDiskMark’s read and write tests, respectively.

There is an access panel at the bottom so that you can get to the two RAM slots, but you need to remove all the screws and the bottom panel to get to the hard drive and SSD slots. A couple of fans keep the CPU and GPU cool, and there is some noise to be heard from these fans when they start spinning. We didn't find the noise to be annoying, and if you're gaming with a headset on, only those in your immediate vicinity will hear them.

Put this laptop under consideration if you've been on the lookout for a mobile gaming system that isn't bulky and which doesn't cost too much money. At $1499, it's a capable system that can run many modern titles, but not all at high detail settings.