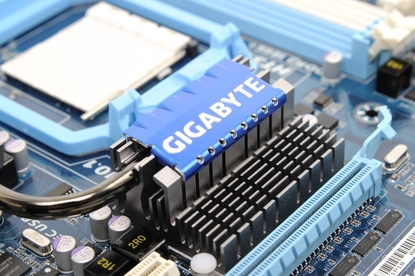 If you want to build a powerful system without spending too much money, AMD is the way to go and Gigabyte's GA-890GPA-UD3H is one of the best bang-for-buck motherboards on the market. It has support for the latest AMD Phenom II X6 CPUs, it's equipped with a USB 3.0 controller, and its integrated graphics are good enough for Full HD video processing. We recommend it.

The Gigabyte GA-890GPA-UD3H sure is a hard model name to remember when your friends ask you which motherboard you just bought. Instead, just tell them you've bought one of the best value for money AMD-based motherboards on the market.

The GA-890GPA-UD3H has an AM3 CPU socket, four DDR3 memory slots and it runs AMD's 890GX chipset. This northbridge chipset is one step below the flagship AMD 890FX chipset, and it will run the latest AMD Phenom II quad-core and six-core CPUs. We tested it with an AMD Phenom II X6 1055T CPU, and the processor was recognised immediately; we used rev 2.0 of the motherboard and didn't have to flash the BIOS in order to get the CPU to work. We ran it with 8GB of RAM and a 1TB hard drive and didn't experience any stability issues at all.

The 890GX chipset differs from the FX chipset in that it has a built-in graphics adapter and fewer PCI Express lanes. This adapter makes the GA-890GPA-UD3H a great choice for anyone who wants to a build a powerful computer on a budget, as money can be saved by not buying a separate graphics card.

The built-in graphics adapter is an ATI Radeon HD 4290 that supports DirectX 10.1. It has its own 128MB of memory, plus the ability to use HyperMemory — that is, it also uses a portion of your system RAM as its storage buffer. It has a clock speed of 700MHz and it isn't designed to run the latest games, but it's powerful enough to display HD video and the Windows 7 Aero interface. In fact, unless you're into gaming, then you won't need to buy a graphics card — the motherboard graphics will do a commendable job, and will make your system more power efficient, cooler and quieter.

Because of these traits, you could use this board for a media centre PC. It has an HDMI port on its rear port cluster, so you can easily get it to run with a big-screen TV. It also has DVI and VGA ports. You can't use both the HDMI and the DVI ports simultaneously as they share the same resources. However, you could use the VGA port and either the HDMI or DVI port to connect up to two displays.

The internal graphics can be supplemented by an external graphics card and the board's Hybrid CrossFireX mode. Hybrid CrossFireX mode will run both the integrated and separate graphics cards simultaneously in CrossFire mode and this is a decent solution if you want to get a bit more graphics performance out of your system without wasting the onboard graphics capability. It will work with an ATI Radeon HD 5450 graphics adapter. We first saw this technology over two years ago in the Gigabyte GA-MA78GM-S2H motherboard.

For upgrading, the board has one PCIe x16 slot and one PCIe x8 slot (which shares the bandwidth with the x16 slot). You also get three PCIe x1 slots and two PCI slots, so there is plenty of scope for upgrading and also for using older add-in cards you may have lying around.

External expansion is facilitated by up to 12 USB 2.0 ports (including eight via internal pin headers) and Gigabyte has added an NEC USB 3.0 chip to control two of the ports on the rear panel. There aren't many USB 3.0 devices on the market yet, but Western Digital's will run at least 40 megabytes per second faster on NEC's USB 3.0 controller than on a typical USB 2.0 controller, for example.

The SATA port design is perhaps the only blemish on the GA-890GPA-UD3H. Overall, we've found it to be a very well built and reliable board that's perfect for running a brand new AMD Phenom II CPU. We like the inclusion of USB 3.0, and the integrated graphics chip is good enough at displaying HD video and high resolution images to negate the need for an external graphics card.