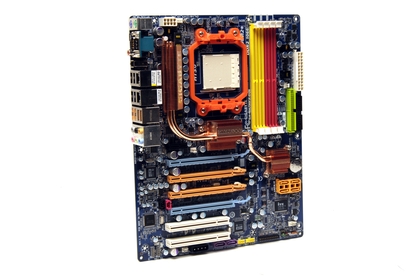 Feature-packed and with 'Spider' capability (you can run up to four graphics cards in CrossFire X mode), this board will suit hardcore enthusiasts, but may be a little too much for conservative users. Either way, it performed reliably in our tests and has an exceptional build quality.

While AMD's latest CPUs aren't likely to win back many enthusiast users on their own, the motherboard vendors are doing everything in their power to entice power users back to the AMD platform, which was once a performance champion. In fact, Gigabyte's GA-MA790FX-DQ6 motherboard harnesses AMD's 'Spider' design, which is tailor-made for gamers, yet it should also appeal to users who want to build an affordable workstation PC for rendering video or other taxing tasks.

The 'Spider' platform is based on AMD's 790FX chipset and pairs two PCIe x16 slots with two PCIe x8 slots, which allow for up to four ATI-based cards to be used in a CrossFire X configuration. As the slots are all right next to each other, 'Spider' can only be implemented when single-thickness graphics cards are used, such as ones based on the Radeon HD 3850 GPU. Double-thickness cards, such as ones based on the HD Radeon 3870, can be setup in a regular CrossFire configuration using the two outer PCIe x16 slots. However, we're yet to notice any benefits from this type of CrossFire when running games under Windows Vista.

The DQ6 is a motherboard that's built to the highest of standards and is chock-a-block full of ports and slots (in fact, it's pretty much identical to the GA-MA790FX-DS5, except it provides two extra PCIe x8 slots and an extra LAN port). Its AM2+ CPU socket will accept any of AMD's latest Phenom chips, as well as Athlon 64 X2 and Sempron CPUs. We used an AMD Athlon 64 X2 5000+ CPU (2.3GHz), as well as an AMD Phenom 9600 CPU (2.6GHz) for our tests, which we paired with 2GB of DDR2 memory, a 750GB Seagate Barracuda hard drive and an ATI Radeon HD 3870-based graphics card. Using the default speed of the Athlon 64 CPU, this configuration scored 84 in our WorldBench 6 benchmark, which is two points off what we expected. When we used the Phenom 9600, the board scored 90 in WorldBench 6, which is a marked improvement, and the two extra cores will help when running more than two applications simultaneously.

We were also able to overclock this motherboard easily by manipulating the bus speed to make our 5000+ CPU run at 2.86GHz. It ran reliably at this speed and posted a score of 89 in WorldBench 6. Those of you who want to use older AMD CPUs with this board will definitely get good purchase out of it, and will be able to move up to a Phenom in future without updating the BIOS.

As for connectivity, the DQ6 is as versatile as they come. The rear panel has USB 2.0, FireWire, 8-channel analogue and digital audio ports, two gigabit Ethernet ports and eSATA. However, the board could use a couple more internal SATA ports. Currently, it has four which are controlled by the AMD chipset, and two more, which are controlled by a Gigabyte chip. The AMD-controlled ports support RAID 0, 1 and 0+1 modes for speed and redundancy, respectively.

We love the build quality of this board, which is the same as the GA-MA790FX-DS5, and thanks to its silent heat-pipe cooling system and dynamic fan control, it'll run almost silently (not taking into consideration the graphics card and hard drive configuration of a PC).

If you're in the market for an AMD board that'll let you run a new quad-core CPU and up to four graphics cards, there's no better option. If you don't need the extra graphics slots, then the DS5 is a better proposition.