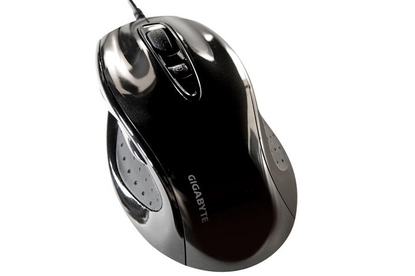 Gaming peripherals usually restrict themselves to enthusiasts on account of their price. However, Gigabyte has attempted to break this trend with its GM series of gaming mice that do not cost the earth. The Gigabyte GM-M6880 is a laser mouse that falls into this category.

The Gigabyte GM-M6880 is a pretty big mouse and it should fill up most of your hand. It also weighs 100 grams and as a result feels quite balanced and solid. The body is mainly made up of glossy plastic and rubberised grips. The build quality is good except for the mouse wheel which shakes around a bit. Also, the mouse wheel is difficult to click and requires some extra effort. The mouse is also designed ergonomically so that it fits well within the hand. There are also rubber grips placed on the body to help you keep a firm grip on the mouse, including one where your thumb rests and one for your ring finger. The left and right mouse buttons also are grooved for your index and middle fingers to fit in.

Apart from the left, right and middle mouse buttons, the Gigabyte GM-M6880 mouse has three more buttons. One is placed just below the middle mouse button and is used for changing the mouse's sensitivity from 800 to 1600 dpi on the fly. On the left side there are two additional buttons which you can program according to your needs. By default they are set to act as the forward and backward navigation buttons when browsing the web.

The Gigabyte GM-M6880 mouse's performance was frankly disappointing especially when it came to regular usage. For one, it is a little too sensitive and we spent a considerable amount of time tweaking the pointer speed. Plus, sometimes even when the mouse wasn't in contact with the table, moving it still caused the pointer to move.

In gaming, the Gigabyte GM-M6880's sensitivity comes into play quite well. Especially when playing FPS games with sniper modes, the DPI button was handy. We played a couple of such games including S.T.A.L.K.E.R- Shadow of Chernobyl, Call of Duty: Modern Warfare 2 and Medal of Honor: Airborne. The mouse's weight also helped bring an extra degree precision in these games.

However, in games that don't require all that much precision including GTA IV and Saint's Row 2, the Gigabyte GM-M6880's extra sensitivity served as an actual detriment. It was a similar case in RTS titles such as Dawn of War and Starcraft.