Gigabyte has launched its extreme Ultrabook in Australia, catering to users who want power as well as mobility 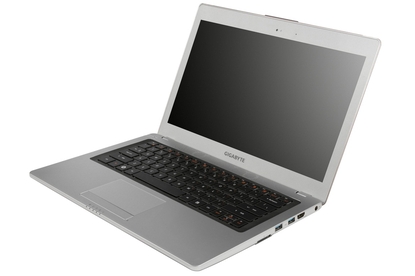 Gigabyte's extreme Ultrabook is tailored towards users who want plenty of speed in a small chassis. It has a powerful graphics chip, a full-voltage CPU, and it can be configured with up to 8GB of RAM and hybrid storage.

Gigabyte today unleashed what it calls an extreme Ultrabook on the Australian market. The slender, 14in U2442N Ultrabook will be distributed through Altech and, in typical Gigabyte style, it has been designed for users who want a little more power from an Ultrabook than most typical models on the market can supply.

A third generation Intel Core i5-3210M CPU is installed, which is more powerful (and power hungry) than the Core i5-3317U ultra-low voltage CPU that's common in Core i5-based Ultrabooks and it can accept a maximum of 8GB of DDR3 SDRAM through two So-DIMM slots. Not only that though, the Gigabyte U2442N features NVIDIA GeForce GT 640M graphics, which give it more grunt when it comes to hardware-accelerated video processing and, of course, gaming. Optimus technology allows the Ultrabook to switch back to integrated Intel graphics when on the go and battery life is a priority.

Storage is handled by a 120GB mSATA solid state drive, but a 5400rpm hard drive up to 1TB in capacity is also available. If a second SSD is installed in the notebook, then the mSATA drive and the regular SSD can be used in a RAID 0 configuration, greatly boosting the overall responsiveness of the Ultrabook.

Physically, the Ultrabook is made out of metal and it's about 21mm at its thickest point. It feels sturdy and looks good, and it comes with a backlit keyboard as well as a large touchpad. The touchpad has a rough texture on it and a single mould covering the left- and right-click buttons. Two fans and vents on the rear of the chassis keep the unit from overheating when it's under a full processing load. Depending on the configuration you choose, the weight of the U2442N can be up to 1.7kg, about 400g grams more than a typical 13.3in Ultrabook.

The ports around the U2442N Ultrabook are full-sized and include two each USB 2.0 and USB 3.0 ports, Gigabit Ethernet, HDMI, VGA, headphone and microphone ports. There is also an SD card slot. Bluetooth is installed and you also get a 1.3-megapixel webcam and 802.11n Wi-Fi. Unfortunately, it's not dual-band Wi-Fi, but it does support WiDi (Intel's Wireless Display), which can be used to view your notebook's content on a TV that has a WiDi adapter installed (such as the Belkin ScreenCast TV).

The screen has a native resolution of 1600x900, which is larger than the 1366x768 offered by many Ultrabooks. The battery has a rating of 44 Watt-hours.

Pricing for Gigabyte's Ultrabook will vary depending on the configuration, but a quick search online showed that you can expect to pay around $1400. For a mobile laptop with such a potent configuration, that's a pretty good deal.