Google make home networking as effortless as everything else 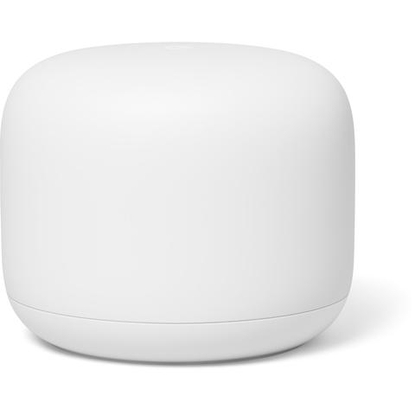 Google make home networking as effortless as everything else.

Should you buy the Google Nest Wi-Fi?

The technical improvements that Google have made here over the original Google Wi-Fi mesh system play second fiddle to the slick software experience that ultimately sets it apart from the other options.

If you’re already or even a little embedded in the wider Google ecosystem and aren’t waiting for Wi-Fi 6, the Google Nest Wi-Fi system is the mesh option that makes managing your home network close to effortless in its simplicity. There are other options out there with more nuanced features but Google’s latest offering is an excellent - if a little basic - way to go.

In Australia, pricing for the Nest Wi-Fi starts at AU$399 for the standard two-pack.

In Australia, pricing for the Nest Wi-Fi starts at AU$399 for the standard two-pack. There's also a larger three-pack that includes the router and two nodes available for AU$549.

This pricing puts it more or less in line with fare like the Netgear Arlo, D-Link Covr and Linksys Velop. However, some of these alternatives are more technically accomplished and include more nodes in their starter packs.

The Google Nest Wi-Fi is available for preorder now through the Google Store, JB Hi-Fi, Harvey Norman and the Good Guys.

The newly-announced Nest Wi-Fi system consists of two units: a Wi-Fi router that's intended to be wired into your modem/gateway or NBN connection plus a satellite node that boosts coverage into areas where the primary router has trouble reaching.

Each unit involved in the Nest Wi-Fi system touts a pretty similar look. The router is the slightly larger of the two but both feel like a more-rounded, bulbous evolution of the Google Home. There are no pointy antennas and, overall, it's a far cry from the stealth bomber-inspired form-factors that used to dominate the home networking category.

Read more Which Mesh Wi-Fi System Should I Buy?

The primary router unit has a pair of gigabit ethernet ports on it. The satellite doesn’t. Depending on your needs, this might not be a dealbreaker. However, for me, it was definitely a limitation I had to learn to live with. The townhouse I currently live in has not been wired up correctly and the ethernet ports on my mesh system has made getting stable-ish internet upstairs much easier.

As someone who plays a lot of games using my PC, the loss of those ethernet ports on the satellite units was a definite downside to using the Nest Wi-Fi over my existing TP-Link setup. It meant a less stable connection, which in turn caused other issues.

The original Google Wi-Fi router was able to cover about 85 square meters on its own. A second node then boosted that to 170 square meters. By comparison, Google say the Nest Wi-Fi is able to muscle in and deliver up to two times the speed and up to 25% better coverage.

Still, I often found that the appeal of these improvements was often a little stifled by a few conspicuous omissions.

For all the ways in which the Nest Wi-Fi builds on the capabilities of the original Google Wi-Fi, it’s genuinely frustrating to see it arrive without support for Wi-Fi 6. It’s also annoying that it relies on a dual-band configuration rather the tri-band setup that’s become common among the best mesh Wi-Fi systems.

Two years might not seem like a huge amount of time but I can’t help but wish that Google were as interested updating their Wi-Fi system to keep up with the advances in the mesh networking category as they are keeping it aesthetically in line with their smart speaker products.

The Nest Wi-Fi points also feature an integrated set of microphones and on-board Google Assistant capabilities. Essentially, each node doubles as a Google Home or Nest Mini.  It won’t sound as good. Of course, neither the regular Home or the Nest Mini could really be considered audiophile plays.

Still, on principle, I’m always a fan of having one thing instead of two things - so the Nest Wi-Fi kit definitely appeals to me on that level.

On the other hand, there is the microphone thing. There are physical off switches you can use but, on principle, sticking a bunch of extra microphones in your home just to get internet access feels like it might be a stretch for some users.

Regardless, the setup experience for the Nest Wi-Fi system is tightly tied into the newly redesigned Google Home app. In addition to letting you manage your smart speakers and other smart gadgets, this app now lets you easily manage your home network, share a guest password and even remotely control other Nest Wi-Fi networks remotely - so long as things are all neatly tied to your Google account.

All told, this software experience is easily the best part of the Nest Wi-Fi experience.

The math here isn’t hard to understand. Even if the end experience isn’t massively difference and the Google Home app doesn’t allow for the same level of granularity and tinkering as its Netgear or TP-Link counterparts, choosing the Nest Wi-Fi over those established options means having one less app on your phone - which arguably makes it more convenient for those already embedded within the wider Google ecosystem.

In terms of testing out the Nest Wi-Fi, our main metric is connection strength. After all, your actual internet speed is more-often-than-not based on your ISP and connection - not the theoretical max-speed of the router you use to get it inside your house.

Our testing setup involved three devices spread across a three-floor home. The results we got here weren’t too far off what we got from comparable mesh systems like the TP-Link Deco and Linksys Velop.

That being said, we did have some strange connectivity issues regarding one particular room in our home. We’d sometimes have devices in Bedroom 2 drop off our Nest Wi-Fi network entirely for no clear reason. The room in question was a few meters (and walls) away from the nearest node but I set the Nest Wi-Fi up in more-or-less the same layout I’ve used for testing other mesh systems and didn't really encounter this issue with them.

Read more Deal: Nab a Nest Wifi System for $100 less than you should

Over time and with some troubleshooting, this specific issue seems to have become less common - which is good. However, dropouts during online gaming sessions have also become more frequent for my PC - which is bad, since it's about a meter from the satellite. I’ll be the first to admit that I’m not 100% convinced that these dropouts are tied to the Nest Wi-Fi. Wi-Fi networks are fickle and complicated beasts.

Nevertheless, anecdotally, it does feel like the above became a more persistent issue after setting up and connecting to this network versus the time beforehand. Your mileage may vary.

Still, despite the occasional bit of anomalous conduct, the sheer simplicity of setting up and using the Nest Wi-Fi didn’t take all that long to win me over - and I suspect it’ll do the same for many others.

If you’re got a household with way too many Wi-Fi enabled devices, Google’s latest foray into home networking is likely a natural fit that’ll make smart and easy Wi-Fi seem effortless. Whether it performs at a high enough level to sate the needs of gamers is another question entirely.

Regardless of whether you’ve got a Google Home or not, the Nest Wi-Fi system excels at delivering a clean and painless mesh networking experience.

Looking for an alternative to the Google Nest Wi-Fi, check out our guide to mesh networking here.