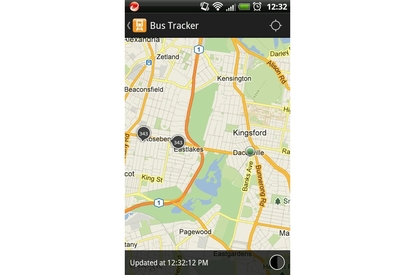 TripView has added a real-time Sydney Buses feed to its timetable data so that you can now see if a bus is running late or if you've already missed it. There is even a map view so that you can see where buses currently are on the route. The updating of the data seemed a little slow for us, but nevertheless, we found this update of the TripView app to be extremely useful. It's a must-buy for Sydney public transport users.

Every Sydneysider's favourite transport app just got updated to include the real-time running of the bus network. No longer do you have to rely solely on the timetable to plan your trip. You can quickly glance at the running schedule to see if your desired bus has already been and gone, (or most likely running late), and you can even bring up a map to see where all related services on that route are currently located.

TripView makes use of data in a GTFS-realtime feed that is available to developers. It's this data that allows TripView to show you what's going on with Sydney's buses. To view real-time running, this must be enabled in the app's Settings. It's a simple checkbox and once it's enabled it will allow you to toggle between real-time data and timetable data, as well as a real-time map, once you've selected your trip.

At its simplest, the summary view (the view that shows the bus routes leaving your stop) informs you if the particular route from the stop you've selected is running on time, with little green squares indicating on-time running and red squares indicating a late-running service. If you click on a route, then you can follow the progress of the bus as it passes each stop. Stops that have been passed are shown in a dark blue, while upcoming stops are light blue. In this view, you can easily make comparisons between the scheduled times and the real-time running — just click on the headings at the top of the screen.

Our initial tests of this new feature show it to be very useful for the most part, but the real-time reporting was a little bit off. While the bus was on time, the real-time tracking was accurate, but as the bus started to get a little ahead of schedule (which we thought would be rare, but it happened to us twice in two days), the app didn't update the stops it had passed until about one or two minutes after it had gone past a stop. This means that if you rock up to a stop thinking that the bus is still on the way, you might get disappointed. This is most probably due to the bus taking a little bit of time to send out its position data.

If you're a graphical person and would prefer to see a map with the bus locations on it, you can easily bring one up while in summary view for a particular trip — just press the icon in the bottom-right corner of the screen. This view can be a little confusing if there are services running the other way or services that have terminated, so you'll have to pay attention to the direction of the little icons. In our tests, it took about one minute for the map to update after the bus had gone past our stop.

The map data and the real-time updates are said to consume a few kilobytes of data per minute. However, we had a lot of trouble actually getting maps to load on our data connection. The route and the buses on it, as well as the stops and our location showed up, but the roads around it didn't.

Some slight delays in the reporting of the data aren't enough to put us off this app. In fact, we like it more than ever. It's an app that will tell eventually you if your bus has come and gone and you can decide whether to wait for the next one or make alternate arrangements. That is the key with this app: it helps you plan ahead and possibly change your plans rather than having to wait around for a bus that maybe came past a little too early, or which is running very late.

Basically, if you're a bus-catching Sydneysider with a smartphone and you don't already own TripView, then you should definitely pick it up just for the real-time tracking feature. Of course, you can still use it for trains and ferries, and you can save all your trips for easy repeated access when you buy the full version — it only costs $3.29. That's not bad at all for an app that you'll end up using every day and perhaps multiple times per day. If you're a Windows Phone 8 user, TripView will be available for that platform sometime in the future (according to the developer's Twitter feed).