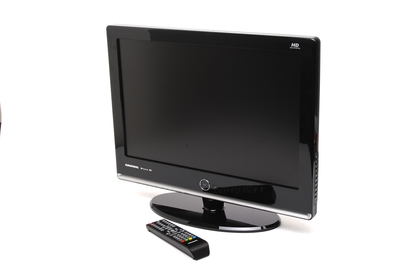 The Grundig Misuro GLCD2208HDV is an all-in-one LCD TV -- it's got an integrated DVD player and can play plenty of different files over USB. If picture quality and power consumption are more important to you than this versatility, we suggest you take a look at the Grundig Vanto GLED2407HDC instead.

The Grundig Misuro GLCD2208HDV is a 22in LCD TV with a built-in DVD player. It's versatile and would make a good addition to a child's room or a cramped home office, but if you don't explicitly need the built-in DVD player we'd go for the Grundig Vanto GLED2407HDC instead for its superior picture quality, better power efficiency and nicer design.

The Grundig Misuro GLCD2208HDV is pretty stock-standard as LCD TVs go — it has a piano black bezel that's a bit too thick to look good, especially along the lower edge where the speakers are hidden. Being a traditional CCFL-backlit LCD TV, it's not especially thin. The Grundig Misuro GLCD2208HDV's slot-loading DVD player is on the left side, hidden slightly out of the way. It's quick to operate once you've put a DVD in, and we couldn't hear it over the TV's inbuilt speakers even at low volume levels.

If you don't want to watch a DVD, the Grundig Misuro GLCD2208HDV can also play a wide range of media files back through its side-mounted USB port. As well as AAC and MP3 music files and JPEG photos, you can also play DivX and MPG4 movies — the two most common formats for downloaded movies and TV shows.

Despite the Grundig Misuro GLCD2208HDV's CCFL backlight, it consumes a relatively small amount of power for its screen size and has a six star energy rating. We ran it for an hour and took an average power reading of 39W — not as low as the Grundig Vanto GLED2407HDC, which also has a larger screen, but impressive nonetheless.

The Grundig Misuro GLCD2208HDV has acceptable picture quality, but it's nothing special. Its 1680x1050pixel resolution means it's not able to display the full amount of detail from a Blu-ray movie or HD digital TV broadcast, but there's no unwanted blurriness or excessive loss of quality when watching these formats. We watched The Dark Knight and Speed Racer, and found picture quality to be generally good. The screen may not have the same pop as the Vanto GLED2407HDC but most viewers will be happy with it. We did notice a small amount of detail lost in bright and dark areas of the screen.

Grundig's Misuro GLCD2208HDV is a good product for an all-in-one TV — its DVD player works perfectly and the USB input is a boon for watching downloaded videos. Picture quality is a step behind the LED-backlit [artnid:382632|Grundig Vanto GLED2407HDC]] though, so if you want a small TV and it's got to look good, look there first.