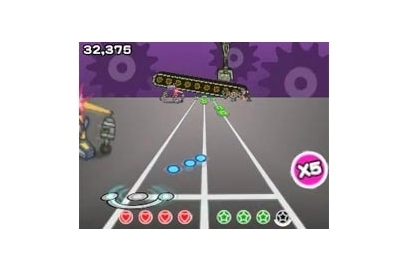 The price of $US4.99 for Phase seems just right considering it's more of a music interaction experience than a complete game within itself. There are a few setup annoyances that suck, such as a necessary upgrade to iTunes 7.5 and syncing with the aforementioned playlist in iTunes. But everyone we handed the game off to really enjoyed their experience with it, so if you're looking for a little time killer on public transport and don't want to turn down the tunes, Phase is the perfect app. for you.

Harmonix, the original developer of Guitar Hero and most recently known for its upcoming Rock Band, snuck out a tasty little treat for iPod owners this week. Available exclusively from the iTunes Music Store, phase is essentially a miniature Guitar Hero.

Phase: what is it?

Phase is an interactive music game that challenges you to tap out the beat of a song. The premise is simple and very similar to the "scrolling circles" gameplay made popular by Guitar Hero. As tracks on the iPod play, circles and sweeps/phrases -- swirl-y lines to follow with the iPod's touch wheel -- scroll toward you. Hit them correctly with the wheel and centre button and you'll earn increase your streak and earn more points.

Unlike Guitar Hero, each song is divided by checkpoints that function as phrases. You're judged on the fly by the familiar "star" rating -- more stars means a better performance -- at each checkpoint. Each phrase in a song has a specific star requirement that you'll need to reach to complete that phrase. Mess up and you lose one of four "life" hearts -- lose all your hearts and its game over.

Phase runs on 5th-generation and newer iPods (including the new Nano and iPod Classic), but is incompatible with the iPod Touch because it lacks the essential click wheel for controls. We played Phase on a 5th-gen iPod with video, and overall, the controls work well. Because the left, centre and right buttons physically click, you get decent response while hitting each of the scrolling circles.

Of course, the click wheel was built for navigation, not games, so you don't get the precision of the Guitar Hero controller. But it does the job well enough, and it doesn't frustrate.

Phase has two game modes: Quick Spin and Marathon. The former is a one-song challenge and the latter increases difficulty through five songs. Three difficulty levels -- easy, medium and hard -- give the game a good range of play. Easy mode is your "laid back" style of play while hard mode offers enough challenge to piss you off from time to time.

For an iPod game, Phase is rather cool-looking with creative art design and rockin'/cutesy dancing characters and objects in the background. There are also multiple background themes to choose from. But what Phase doesn't have is that wonderful level of polish that music games like Guitar Hero do. There's not much tactile feedback or on-screen indication when you miss notes. The music does soften a bit when you miss a note, but at first we thought we somehow lowered the volume by accident.

Phase comes with its own soundtrack of seven songs (mostly indie bands), none of which are incredibly mind-blowing. But the beauty of the game is that it allows you to play along with any track in your iTunes music collection. And with that, Phase manages to do something that even Guitar Hero can't. It's an interesting, if small, first step to interaction with custom music and one that everyone universally wants in music simulation games.

To play along with your own music, you drag the songs you want to play to the automatically created Phase Music playlist in iTunes, sync with your iPod and you're ready to go.