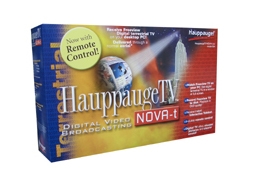 The Nova-t PCI is a great card and its software is very reliable. Its recording and playback performance was excellent in our tests and the WinTV Nova-t software package was easy to use.

Hauppauge's Nova-t PCI card has been around for a while now, and so has its software player, WinTV Nova-t. This software is very stable and more than capable of decent recording, scheduling and timeshifting. Its interface is simple, with the list of channels and control functions on the left of the screen and the main TV window (with "now" and "next" program information) to the right.

Its recording performance is among the best we have seen, as it allows you to pause and resume a recording, which is perfect for cutting out commercial breaks while watching what you are recording. Think back to the days when you patiently sat through recording a program on your VCR with your finger on the pause button in anticipation of the ad break. Another neat feature is that you can record in the background with the video and sound functions off.

One quirk we did find with the software relates to its volume control. If you change the volume within WinTV Nova-t and then exit the program, your WAVE volume will be set to the level of the WinTV Nova-t's volume, affecting the rest of your programs that rely on audio.

For couch-dwellers, the Nova-t PCI ships with a nifty little remote that works very well with WinTV Nova-t. In terms of picture quality, SD and HD programming looked magnificent during testing and the tuner's ability to find all available channels on the first scan was impressive.