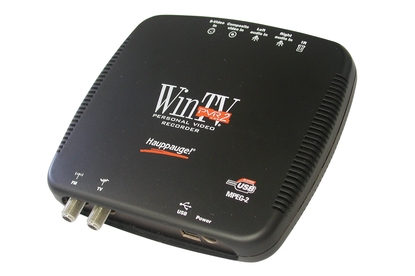 The WinTV-PVR-USB2 is a capable device, but if you have an available PCI slot and don't need the FM tuner, Hauppauge's WinTV-PVR-150 is a better deal.

The analog Hauppauge WinTV-PVR-USB2 is one of the largest USB tuners we've seen. But big size does have some advantages: there's enough room to clearly label each connector, further simplifying an already simple setup. The inputs you're most likely to fiddle with--composite and S-Video--are on the front of the box. Using a coaxial input, the FM radio tuner can receive radio transmissions over the included antenna.

Configuring the WinTV software is straightforward, and you can fine-tune a channel's frequency after setup, in case the automatic scan doesn't quite lock onto the channel properly.

The WinTV tuner software is fairly compact on screen, and as a result some of the buttons are very small. Its recording controls remain hidden until activated.

Curiously, the remote control isn't particularly user-friendly. Five of the buttons on the remote control are unlabelled, and two of them seem to do nothing. It would have made sense to assign one of them to manage the software's Surf feature, which displays thumbnails of current programming on all available channels, but this function isn't accessible from the remote. Adding to the confusion (which the abbreviated documentation didn't help resolve), some buttons operate differently depending on whether you're watching live or timeshifted TV.

When timeshifting video at high-quality settings, the WinTV-PVR-USB2's image quality did not degrade.