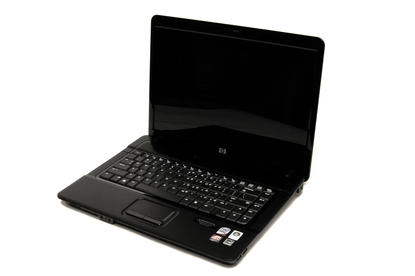 The Compaq 6730s (FV305PA) is the Dunlop of business notebooks. Like the famous shoe, it's plain, workmanlike and reliable, yet also incredibly dull. If you're on the lookout for a basic business laptop with some gaming capabilities, it will get the job done.

The HP Compaq 6730s (FV305PA) is an entry-level business notebook geared towards unpicky professionals. Characterised by a workmanlike performance, moderate price tag and fearsomely dull design, it’s not the sort of notebook that jumps out at prospective buyers. With that being said, most users in need of a basic business laptop should find it sufficient (provided they don’t want to make a fashion statement while using it on the bus).

In recent months, we have seen several notebooks from Hewlett-Packard that run on Intel’s new Centrino 2 platform, codenamed Montevina. The benefits of Centrino 2 include faster and more energy-efficient processors, increased front-side bus frequencies, enhanced network connections, switchable graphics (integrated/dedicated), and built-in support for high-definition video playback. Sounds pretty nifty, doesn’t it? Well, unfortunately, you don’t get any of that here. The 6730s (FV305PA) is one of the few new Compaq models to stick with the previous Santa Rosa platform. Aside from this one caveat, the onboard components are quite decent for a notebook in this price range.

The version we tested was equipped with a 1.8GHz Intel Core 2 Duo T5670 CPU with 1GB of DDR2 RAM, alongside a 160GB hard drive (5400rpm). For graphics, an ATI Radeon HD 3430 is installed, sporting 256MB of dedicated memory. This is pretty good for an entry-level business notebook, which typically stick to integrated graphics chips. Curiously, the model that HP sent us came with Windows XP Professional, rather than its emotionally troubled offspring. Some users may consider this to be a bonus, but if your business has already upgraded its operating system, you may want to opt for the Vista version to save yourself some trouble.

In the past, we’ve occasionally slated HP notebooks for their garishly ‘hip’ designs, many of which were presumably styled after MC Hammer’s happy-pants. Thankfully, this is not the case with the 6730s (FV305PA). Black, basic and bereft of bling, it will look right at home in a soulless boardroom meeting. Even the almost mandatory ‘glossy finish’ is absent, with the outer lid and keyboard remaining plain and unpolished (which makes it less of a fingerprint-magnet). However, we can’t really say we like the minimalist aesthetic: surely a happy medium exists between loud and dull? If so, HP has yet to find it.

Measuring 58x267x32mm and weighing 2.7kg, the 6730s (FV305PA) isn’t the most portable business notebook on the block. Tellingly, HP recommends it for ‘occasional travel’, which sound like marketing-speak for ‘unwieldy brick’. On the plus side, the spacious keyboard and 15.4in widescreen LCD make for a suitably luxurious experience. While the display exhibited good viewing angles and excellent contrast, it suffered from reflectivity issues under bright lighting (to be fair though, this is a charge that could be laid against nearly any notebook.)

In our benchmarks, the Compaq 6730s (FV305PA) gave an adequate if uninspired performance. In WorldBench 6, it scored a less-than-impressive 63: one the lowest results we have seen from a notebook in quite a while. It took us several attempts to run certain tests, including Microsoft Windows Media Encoder and — bizarrely — Microsoft Office 2003. However, it’s worth noting that the XP operating system may have skewed the results. (All of our previous WorldBench 6 tests were run on Vista machines). The individual test results were adequate for the most part, despite the low average. We also ran a Blender 3D rendering demo to measure the CPU’s performance. The 6730s took 1min 45sec to complete this task, which is a solid result for the price and components.

If you’re that rare breed of businessperson who likes to frag enemy mutants between boardroom meetings, then the 6730s has you covered. While unable to run the latest DirectX 10 games (as reflected by its low score of 1687 in 3DMark06), it should still prove suitable for graphics-intensive DX9 titles, such as F.E.A.R. When we ran 3DMark 2001, the system returned a score of 13,328, which isn’t too shabby. Older games will naturally run without a fuss.