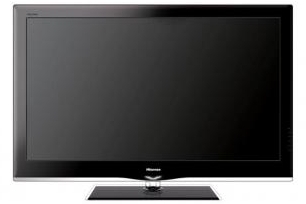 The Hisense HL22T28PL 22in LED television is a good choice if space is at a premium. Video quality isn't excellent, but the HL22T28PL has good detail levels at 1080p when connected to a computer.

The Hisense HL22T28PL is a 22in LED television with a 1000:1 contrast ratio. Its picture quality is average when displaying high contrast video content, and if you intend to use it as a PC monitor it can display good levels of fine image detail thanks to its 1080p Full HD panel.

The Hisense HL22T28PL has similar picture quality to the Tyagi LED24 and Kogan 1080P24 LCD televisions. It has a 1000:1 contrast ratio like its competitors, and a 1080p native resolution for its 22in panel.

When we played the 1080p Full HD Blu-ray version of The Dark Knight through the Hisense HL22T28PL LED television we found that it handled difficult scenes well. Although it only has the same stated contrast ratio as Kogan and Tyagi's televisions we found it handled black detail better when using its default settings. Like the other sets it clipped highlight detail and left bright areas of the screen looking slightly grey and washed out — this is a problem that can only be solved by lowering the screen's brightness, making it difficult to view in a well-lit room.

The advantage of using LED technology in the Hisense HL22T28PL is evident in its low weight and slim profile. Picture quality is only average, but it fares slightly better than its competitors from Tyagi and Kogan. However, the downside is that you are paying a higher retail price for a smaller screen size.