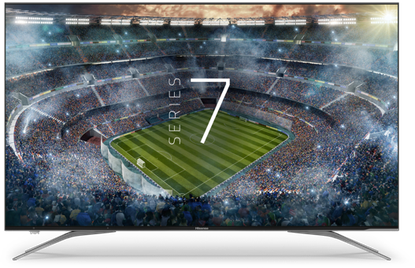 Hisense might be moving to step on the toes of the home entertainment heavyweights this year when it comes to their more-expensive products, but few of the innovations and technical feats have managed to trickle down to the Series 7.

This year is shaping up to be significant one for Hisense - and not just because they’ve snagged a slot as a major sponsor of this year’s World Cup. After several years of positioning themselves as a more-affordable challenger to (expensive) established players in the AV space like Samsung and LG, they’re now looking to compete with them on something closer to equal footing.

The specs for our review sample of the Series 7 ULED were as follows:

In terms of design, there’s not a whole lot to write home about when it comes to the Hisense Series 7 ULED. It’s a mostly-modern looking TV that’s slim enough - but not exceptional or pushing any boundaries when it comes to thinness. It’s got just the right amount of ports and a similarly modest dose of smart functionality via the Hisense VIDAA Smart TV interface. More on this later.

Of course, beyond the ULED labeling, the Series 7 is an edge-lit LCD LED panel. It supports a wider color gamut and HDR - but only HDR10 content. There’s no 10-bit color support, so no Dolby Vision. It also lacks the absolute blacks you’d get out an OLED and the heightened-brightness you’d get from something working off quantum dots.

As mentioned before, Hisense 2018 Series 7 ULED range does come powered by its VIDAA 2.5 smart TV interface. Though this updated interface does offer much speedy and responsive performance than previous versions of VIDAA have, the basket of pros and cons here is more or less unchanged.

On one hand, VIDAA 2.5 is simple, clean and consistently easy to use and navigate. However, on the other hand, it doesn’t quite offer the depth of content and breadth of customizability found elsewhere.

Sure, it supports the usual suspects: Netflix, Stan, Amazon Prime Video. However, with more obscure fare, there's a somewhat-decent chance you’ll probably be out of luck, which doesn’t give us a huge amount of hope when it comes to Hisense keeping this thing updated to support whatever the next major streaming platform happens to be. Still, it does have built-in Chromecast support - which is something.

There’s no AI-powered voice controls (a la LG’s latest) but Hisense have moved to expand the number of ways you can interact with the Series 7 via the a new RemoteNow app. This acts as a virtual on-screen remote to allow for more intuitive customisation of favourite apps, channels and inputs.

[Related Content:Everything you need to know about HDR TVs]

[Related Content: Everything you need to know about QLED TVs]

The physical remote that comes with the TV is no less able, but a little more old-school in form-factor and layout. It’s littered with both the classics and new arrivals like the Netflix and Youtube shortcut buttons.

When it came to the experience of actually watching video content, the Hisense Series 7 ULED did the trick - but I wasn’t left particularly inspired or compelled in the same way that I was with the best LCD LED options that Samsung and LG are offering at the moment.

If you like your TVs big, I feel like there’s definitely value here. However, if you’re a sucker for vivid colors, striking contrasts or better built-in sound, there are other brands out there that can give you more for less on those particular fronts. The Series 7 sits at the bottom-end of Hisenses’ Australian AV lineup this year - and the compromises that have been made to get it to that pricepoint leave it somewhat-outgunned.

Sure, 4K content looks as crisp as ever - and even more-so if it comes HDR-encoded. However, I found that it just didn’t look as striking as has elsewhere. I found myself constantly wishing there were more options when it came to picture quality.

Likewise, whether I was using this TV to play 4K games like Gear of War: Ultimate Edition or non-4K games like Super Mario Odyssey, the impact of the aforementioned Game Mode just just wasn’t as noticeable as you'd hope it would be be.

[Related Content: Buying a TV in 2018? Here's everything you need to know]

In some cases, it felt like it actually made the experience worse. The fact that the toggle for things like Game Mode (and the dedicated Sports Mode) are located within a maze of menus within menus didn’t help either. Enabling them often felt like more trouble than it was worth.

As always, the bottom line when it comes to a Hisense product is the price - and its on this front that the Series 7 falls apart somewhat.

From a marketing perspective, this price-bump is intended to signal that Hisenses’ 2018 ULED range is every bit as worthy of your money as more-expensive fare you can get from Samsung, Panasonic or Sony. Unfortunately, if we’re talking about the consumer experience, it’s a poor match for the competition, OLED or no.

Don’t get me wrong, the Series 7 is a 4K TV that delivers in all the usual ways and it’s definitely a ‘smarter’ package than its predecessor was. However, if we’re talking about a tit for tat comparison with the big guns, a comparison just doesn’t see the Series 7 hold up to scrutiny.

Hisense might be moving to step on the toes of the home entertainment heavyweights this year when it comes to their more-expensive products, but few of the innovations and technical feats have managed to trickle down to the Series 7 - and it’s left lackluster as a consequence.