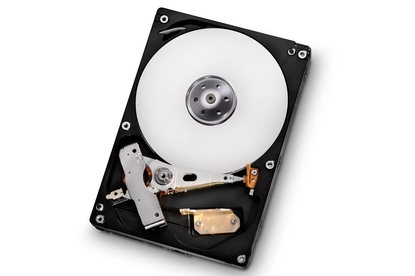 Hitachi's latest traditional platter-based hard drive is a good product: it cuts power over the previous model, runs quietly and without excessive heat, and has generally pleasing performance figures.

Solid-state disks may be all the rage right now for their excellent speeds, low power consumption and small size, but plenty of companies have hedged their bets with tried, tested and traditional products. Good ol’ fashioned magnetic spinning-disk hard drives have been making technological leaps with every generation, and the Hitachi Deskstar is evidence of that: it boasts a single platter for its 1TB capacity, with denser storage with theoretical performance, reliability and power consumption benefits.

To the untrained eye, the 7200RPM Hitachi Deskstar 7K1000.D looks identical to any other 3.5in form-factor hard disk drive. Closer inspection reveals that it’s slightly lighter than most other older drives, at 450g. Western Digital’s Caviar Black 1TB HDD is 690g, in comparison; the Deskstar’s single 1TB platter saves significant weight over the two-500GB-platter Caviar Black.

As we just mentioned, the dimensions of the Deskstar 7K1000.D are exactly in line with the 3.5in standard: the drive is 101.6mm wide, 147mm deep and 26.1mm tall. The requisite power and SATA connectors are on the drive’s end, and predictably this latest Hitachi is SATA 3 compliant for a theoretical 6Gb/s maximum throughput. After formatting, the Deskstar 7K1000.D’s 1TB capacity translates into 931.5GB of usable space.

Hitachi claims 3.7W power usage at idle, with 15 per cent lower idle power consumption compared to the previous 7K1000.C model. Another advantage of the single platter is generally low power consumption: we measured 4.4W during read/write versus the 6.7W our comparison Western Digital Caviar Black achieved. This might not sound like much, but if you’re running half a dozen of these drives in an impromptu file-server the difference would be noticeable.

The Hitachi Deskstar 7K1000.D 1TB model we tested was near-silent during operation, with only a small amount of noise audible during the disk's spin-up to 7200RPM: on par with the WD Caviar Black and significantly quieter than the Seagate Barracuda XT we used as benchmarks. The drive was also generally cool during operation, only getting warm rather than hot after an extended read/write torture session. These results, thankfully, are a far cry from other hard drives that bore the Deskstar name in the past.

Our test platform was an Intel Core i7-2600 CPU, 8GB of DDR3 RAM, a near-empty Intel X25-M 80GB SSD, and an AMD Radeon HD 6970 graphics card on an Intel reference design P67 motherboard, running Windows 7 Ultimate SP1 64-bit edition. We used the latest WHQL drivers, which were installed automatically when we booted up Windows with the Deskstar 7K1000.D connected.

Our real-world file write speeds were 146.1 MB/s for a single 8.3GB file, and 110.2 MB/s for a series of 1300 small files with a total size of 3.4GB. When we copied these files from one area of the drive to another, we measured an average speed of 60.5 MB/s. CrystalDiskMark returned a synthetic benchmark read result of 193.8 MB/s and a write result of 193.6 MB/s sequentially. These results are good and demonstrate the Hitachi Deskstar 7K1000.D’s good performance credentials. HD Tune Pro told us that the disk averaged an access time of 18.7 ms, with a burst rate of 205.2 MB/s — not great, but OK.

Hitachi’s latest and greatest hard drive is a generally good performer, with our only concern the slightly slow disk access time result. It’s quiet, cool and reasonably quick — if you can find one for a reasonable price post-Thailand flooding, we’d happily recommend it. We found the cheapest street price for it to be around the $129 mark.