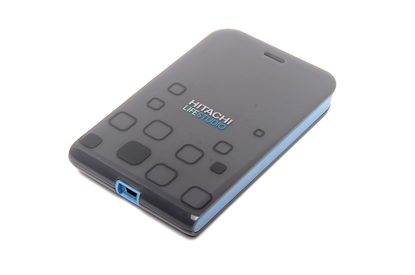 The Hitachi LifeStudio Mobile Plus is a reliable external hard drive for people who regularly store photos and videos on their PC. Novice users will be particularly well serviced by the user-friendly interface.

The Hitachi LifeStudio Mobile Plus is a 500GB external hard drive that connects magnetically to a 4GB USB key included in the sales package. As its name implies, it is a portable version of the Hitachi LifeStudio Desk Plus. Both hard drives come with the same file management and backup software — which includes three gigabyte’s worth of free cloud storage.

Like its portlier brother, the Hitachi LifeStudio Mobile Plus attempts to bring a fresh approach to the storage process, with the built-in LifeStudio software offering a streamlined, 3D representation of your data. In addition, the software will automatically organise and sync your media files for ease of mind.

During testing, we found that the LifeStudio software did a good job of sorting our photos and videos. Stored media files are represented via an interactive 3D wall, dubbed ‘MyLife’. We think novice users (read: mums and dads) will be particularly enamoured with this visual, Web 2.0-style interface.

The LifeStudio software does a great job of streamlining the navigational process — instead of sifting through multiple files, everything is right there at your fingertips. LifeStudio can also integrate with services such as Facebook, Flickr and Picasa (you can even upload photos or comments directly from the application).

Hitachi has ensured that its backup software is equally straightforward and user-friendly, with each feature and option clearly spelled out for the user. As mentioned, the Hitachi LifeStudio Mobile Plus comes with free cloud storage, which allows you to store up to 3GB of data remotely. A 250GB upgrade is also offered, though this carries a fee of $49 per year.

The LifeStudio Mobile Plus is curiously complicated for a mobile hard drive, comprising three separate components: a mounting dock, a detachable hard drive and a magnetic USB key. The 4GB thumb drive hangs off the dock via a magnetic landing strip, while the hard drive slots in the back. Rather coolly, the USB key is recognised as a separate drive when attached to the dock, despite not being ‘plugged’ into anything. (Well, we thought it was pretty nifty anyway.)

To test the Hitachi LifeStudio Mobile Plus’s transfer speeds, we copied files back and forth between the drive and our testbed equipped with a Intel Core i7 965, 300GB Western Digital Velociraptor drive and 6GB of DDR3 RAM. We also copied the folders from one location on the LifeStudio Moble Plus to another, to test its speed when simultaneously reading and writing files.

The first test consisted of 3GB worth of 1MB files, which simulates installing applications and backing up system files. In the second test, we used a 20GB folder of 3-4GB files, including high-definition movies. Let’s take a look at how it compared to other external hard drives on the market:

The Hitachi LifeStudio Mobile Plus gave a fairly average performance when it came to write speeds. Meanwhile, the included 4GB thumb drive mustered an average write speed of 5.8MBps (megabytes per second) and a read speed of 12.6MBps. While it's not the fastest hard drive on the market, the Hitachi LifeStudio Mobile Plus still managed to impress with its novel design and user-friendly interface.