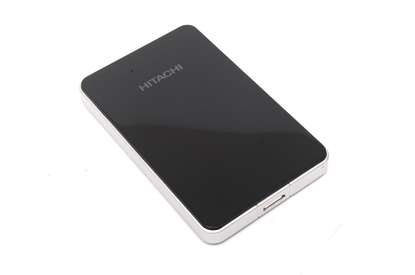 Hitachi's Touro Mobile Pro Portable Drive is a fast 500GB external drive with a 7200rpm spin speed and a USB 3.0 interface. It ships with easy-to-use back up software, which is well suited to anyone who knows they should back up their data but doesn't know where to start.

Hitachi's 500GB Touro Mobile Pro portable USB 3.0 hard drive is unashamedly modelled after the iPhone 4. It looks so much like one that you could probably play a joke on your friends with it from a distance. Once they realise that it's a little bigger than an iPhone 4 and that it doesn't actually have a screen, hilarity may ensue. We only got polite laughs when we tried it, but we're adamant that someone with suitable comedic skills could pull a few legitimate laughs with it.

Anyway, where were we… oh yes, it's a hard drive, not an iPhone 4. There is not much to this drive: it has a USB 3.0 interface on its bottom end, Hitachi branding on the front and a sticker with its model number on the rear. A blue status light illuminates once you plug the drive in to your computer using the thick, but ultimately too short USB 3.0 cable that ships with it. The cable is only around 40cm long and hard to manoeuvre. The drive doesn't require a separate power connection — it gets all its power from the USB port.

On the inside, the Touro Pro has a 500GB hard drive with a spin speed of 7200rpm. It has a formatted capacity of 465GB, which, considering the drive's recommended retail price of $94.50, equates to a cost per gigabyte of 18.9 cents. This is cheaper than similar USB 3.0 portable drives we've seen, such as the Imoega eGo. However, as this is a recommended retail price, you might be able to find it cheaper if you shop around. For example, some 500GB USB 3.0 drives (such as Samsung's S2) can be found for less than $80.

The reason for the Touro drive's Pro designation is to do with the back up software that Hitachi ships with the drive, which is called, funnily enough, Hitachi Backup. This software is present on the drive itself and it's available for both Windows and Mac users. The software is very basic and it's set to back up everything in your user account folder by default (although you can specify which folders should be backed up, too). To start backing up your data, all you have to do is make sure the Hitachi is selected as the back-up location and flip the software's 'on switch'.

Once the back up process is switched on, it will start backing up all your files immediately in the background while you work. The time it takes to back up your data will depend on the amount of data and the type of data (small or large files) you have in the folder that you're backing up. Rest assured though, however much data you have, backing it up via USB 3.0 is a lot faster than backing it up via USB 2.0. If your computer has a USB 3.0 port, then the Hitachi is well recommended. In our test scenario using a typical laptop with a 7200rpm hard drive installed, the drive backed up our Windows 7 user folder, containing 44GB worth of files, in around 14min, which equates to a rate of 56.42 megabytes per second.

The software is set to automatically back up your specified folders every half an hour by default, but the frequency of the back up can be made daily instead and you can specify the time it should start. If the Touro is not plugged in and a scheduled back up is missed, then the back up will occur at the next scheduled time. The back up is not encrypted and it can easily be accessed by navigating through the Hitachi Backup folder on the hard drive.

A cloud back up feature is also available. Hitachi gives you 3GB of free space for this and you can specify which folders should be included, what size files should be included, and also how much bandwidth the upload should use. The cloud storage can be upgraded to 250GB for a fee of US$49.

If you're in the market for a new portable USB 3.0 drive, the Hitachi is well worth considering — and even if you're not in the market, you can never have too many portable hard drives lying around. It's fast and it comes with easy-to-use back up software. If you want a drive without the back up software, then the 500GB Touro Mobile Drive is available for just $84.95. If you want a desktop drive, then the Touro Desk Pro is available for $104 (1TB version).