This new model doesn't offer much new at all, except for a different paint job 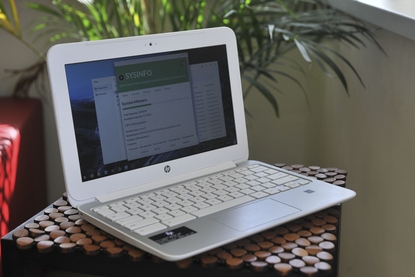 For the asking price of $399 (and even with a lower street price of $349), the HP Chromebook 11 isn’t as enticing an option as it should be, and it could stand to lose at least another $50 off the street price to make it a more serious alternative for those of you who are after a tiny and basic laptop.

HP’s Chromebook 11 has been given a slight makeover since the previous model we reviewed back in February, with the new model now available in a couple of different two-tone colourways (Snow White and Ocean Turquoise shells with a silver palm rest), which give it a fresher vibe. Other than that, there is nothing new about this Google Chrome OS-based laptop, with the configuration and the connections remaining constant. The asking price also hasn’t changed.

Is it too expensive?

The price may be the most discouraging aspect of HP’s Chromebook 11, especially considering that it now competes with some entry level Windows 8-based laptop models (mainly HP’s own Pavilion computers) in the same price range, albeit models with sluggish performance. Given that the Chromebook is meant to be a simpler device, a more aggressive entry price of $299 would make it a more worthwhile proposition. As it stands, it could turn off those of you who are otherwise considering a low-cost laptop, unless you are specifically after a Chrome OS-based device.

Physically, there is not much to the Chromebook 11: it has a typical clamshell design, an 11.6in screen, a keyboard with easy-to-hit keys, a bog-standard touchpad, and a couple of USB 2.0 ports. You get Bluetooth, dual-band Wi-Fi, a webcam, speakers, and a headphone port. It’s as simple as laptop hardware gets, and it’s meant to be; it’s not designed for bragging rights, and it won’t win any speed contests. You’re not supposed to think about the configuration, and that’s one of the differentiation points between a Chromebook and a Windows laptop. You’re meant to just boot it up and get on with it.

For the most part, the Samsung Exynos 5 CPU, 2GB of RAM and 16GB of solid state storage allow you to do just that. It’s not a laptop that’s primed for running taxing tasks, nor for great multitasking. Instead, it offers all you need for Web browsing, Web apps, and online document creation through Google’s Docs environment, and you can access all of your documents at any time through Google Drive from anywhere with an Internet connection. This is the appeal of the Chromebook: it’s an instant system that you can use for Web browsing, Web storage, and Web-based document work without you doing anything except logging in. If you use Google Play Music and Videos, that’s even better.

Adding further to the appeal of this is the fact that anyone can use this Chromebook simply by entering their own login details, and they will have access to all of their Google Drive and Docs contents without being able to touch yours. It’s useful as a computer that will be shared among different users. Likewise, if you have multiple Google accounts, say one personal and one for work, you can also set it up so that you can switch between these accounts and keep your two environments separate.

Locally stored data is kept separate, too. Anything one user keeps in the ‘Downloads’ folder on the local drive won’t be seen by the other user. But since there is barely any storage at 16GB, you won’t want to keep too many large files on the Chromebook. It’s a shame that HP hasn’t installed an SD or microSD slot so that you can carry around more of your own music and videos. A slot like that would be ideal for the times when you are using the Chromebook while commuting without a Wi-Fi connection, but you could always plug in a USB stick. Wi-Fi is the only way to get online, and the 802.11n module supports both 2.4GHz and 5GHz networks.

What about overall performance?

It’s not a great unit for watching locally stored videos due to the basic screen, which is a 1366x768-pixel panel, and different viewing angles can cause colour shift. There is limited video file support, but it goes okay with MP4 files, so you can carry around some TV shows or movies in this format if you wish. Video playback is our choice of battery test for laptop devices. When looping a Full HD MP4 file with the screen brightness set to full and Wi-Fi enabled, the Chromebook 11 lasted 5hr 15min. This is short of the six hours that HP claims in its spiel about the product, but you would get close to the six hour figure if using a lower brightness and just browsing simple Web pages. Charging can take over four hours via the micro-USB adapter that’s provided.

We found the overall performance of the Chromebook 11 to be fine for the purposes of using Docs, browsing Web sites, and it even did a reasonable job when streaming video from sites other than YouTube. SBS OnDemand video streaming worked well at up to 1000Kbps, though motion looked a little stifled. ABC’s iView, which auto-selects the quality, played back smoothly, but with a low picture quality. Meanwhile, premium services such as the NBA’s League Pass were passable at 1600Kbps, but the motion was not completely fluid and we don’t recommend using it for such a service.

Getting some figures from Web-based benchmarks, we saw that the performance over the earlier Chromebook 11 model hasn’t changed much at all. Its time of 690ms in the SunSpider benchmark was slower, as was its 5666 score in Octane. Only Futuremark’s Peacekeeper result of 1333 is better than the older model. This is all typical performance for the class of CPU that’s installed in the Chromebook 11, and it’s slower than what you would expect of an Intel-based Chromebook such as Acer’s C720, which runs a Celeron CPU.

For typing, the Chromebook 11 is a good unit. Its keyboard is spacious considering the 11.6in form factor, though the large bezel around the screen adds a bit to the overall footprint, and this is what enables the keys to be so well spread. The keys are laid in a Chiclet style that makes them easy targets to hit, and we particularly like the gaps left between the left and right arrow keys and the keys above them. We found it to be a satisfying keyboard for lengthy typing, and the reasonably light 1.2kg weight of the unit made it easy to rest in our lap for prolonged periods (not to mention easy to cart between home and work).

Shortcut keys across the top allow you to quickly change brightness, volume, and to perform refresh and navigation tasks on Web pages. There are some other Chrome OS-specific keys, too: the key with the square and the lines next to it brings up all the open apps on your system, and in conjunction with the Ctrl key, it can be used to take a screenshot. A square with arrows key next to it will put the screen into full-screen mode when you hit it.

A touchpad is installed for navigation, and it’s limited in its performance. We found its tracking to be too ‘heavy’ for our liking, even after we adjusted the sensitivity to make it faster. Sometimes we had to repeat our movements, and taps didn’t always register and we had to physically press on the pad. Two-finger scrolling is supported, but double-tapping-and-holding to drag the scroll bar of a window is not supported.

For the asking price of $399 (and even with a lower street price of $349), the HP Chromebook 11 isn’t as enticing an option as it should be, and it could stand to lose at least another $50 off the street price to make it a more serious alternative for those of you who are after a tiny and basic laptop. Otherwise, Windows machines around the $400 mark could keep away those of you who are potential converts. Acer’s C720, while also playing in the same price range, represents better value considering it comes with a bit more CPU power, an SD card slot, an HDMI port, and it also gave us better battery life in our tests.

See our other Chromebook reviews for more details on Chrome OS and how it can be used: